To get from Bangladesh to Myanmar I would need to cross through India for a third time. This region is more mountainous and less populated, so I was looking forward to it much more than I had the other parts of India.

Maybe I was just unaccustomed to it after a rest day spent mostly inside, but the stench of Bangladesh seemed particularly disgusting this morning. I found it difficult to breathe through the nauseating stink of pollution and rotting litter. I rode toward the border, looking forward to leaving the country.

After about three hours, I reached the border where I found that apparently I had to pay a “travel tax,” of 500 taka. I’d already spent most of my Bangladeshi money, and at one point was told I’d have to return to Sylhet. Thankfully, I was able to exchange some Indian rupees with a shopkeeper.

I then went to immigration and had my details entered into the first of many logbooks, before receiving my exit stamp. I was delayed a bit at customs as the officers were confused about whether I could cross the border by bike. Eventually they decided I could, and entered my details in a logbook. There was then a third building, staffed (unusually) by women, where my details were entered yet again for some reason. Then it was on to India!

After a few more logbooks, I received my entry stamp and rode away from the border, into the state of Meghalaya. Immediately there was a noticeable difference. The population density was far reduced, and people seemed richer. There were no longer trikes or bikes, and seemingly high levels of car ownership. Drivers were comparatively respectful. The terrain was a complete change: I was now approaching forested mountains.

I stopped shortly after the border for a break, and to do some bike maintenance. I needed to adjust my front derailleur so that I could swap to the small chainring – something I hadn’t needed to do in flat Bangladesh. My front wheel was also slightly out of true and the tyre rubbed on the frame. The tyre is about as wide as could fit in the fork, so the wheel only needed to be slightly out of true to be a problem. I trued it, and the rear wheel too – where I realised I’d lost a spoke. I then continued riding up a fairly consistent climb.

The climb continued for the rest of the day. It was an enjoyable ride, with far fewer people around. Those few people were very welcoming, with lots of smiling children waving and calling out hellos and goodbyes. The people here look slightly more East Asian than in Bangladesh, and often have red teeth – the result of chewing paan, a very popular past-time here.

Meghalaya is majority Christian, so I saw lots of churches.

I rode until it started to get dark, then left the road and set up camp in a wooded area. It was the first time I’d set up the tent in over a month! At an elevation of 1500m, it was the highest I’d been in the last couple weeks.

It was quite windy in the morning, and thus chilly as I continued climbing upwards. A little over 1800m, I turned off to visit a site I’ve long wanted to see. The road climbed slightly higher before beginning to descend, gradually at first but soon getting steeper. 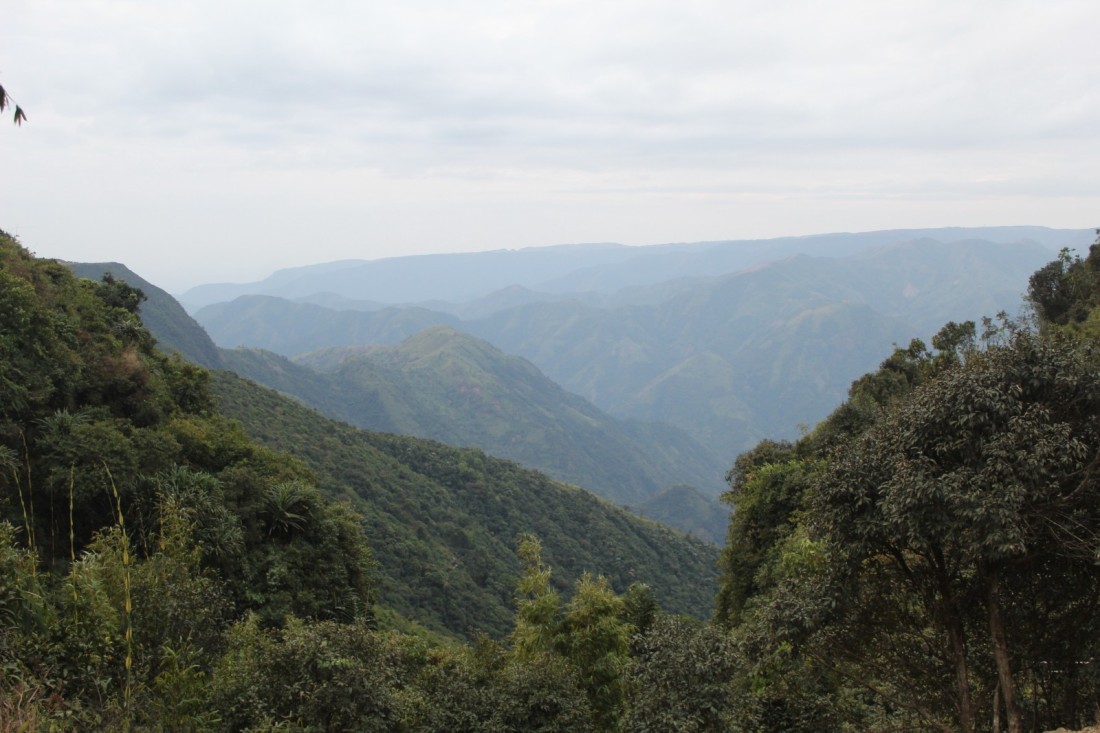 The first part of the descent was great fun – the road was smooth enough and the gradients gentle enough that I could go fast but not need to brake, and I took the corners fast. The last section got steeper and became more pothole than road, with some sand and gravel mixed in for good measure. I put quite a bit of wear on my brake pads during this final part of the descent which brought me down below 700m.

I locked up my bike and continued on foot for the next part: an incredibly long staircase. Descending over 300 metres via 1500 stairs took quite a while!

Much of this infrastructure had been constructed by some sort of employment guarantee scheme, according to various signs. According to this sign, it took 360 person-days, with spending on wages of £660 – less than £2 a day.

The reason I’d come all this way was to see the Living Root Bridges. These are created from the living roots of rubber trees. As the roots grow overground, the people here guide them across a valley. In a process that can take a couple of decades, they are eventually intertwined to form a bridge. Nowadays they are generally stabilised with planks of wood. 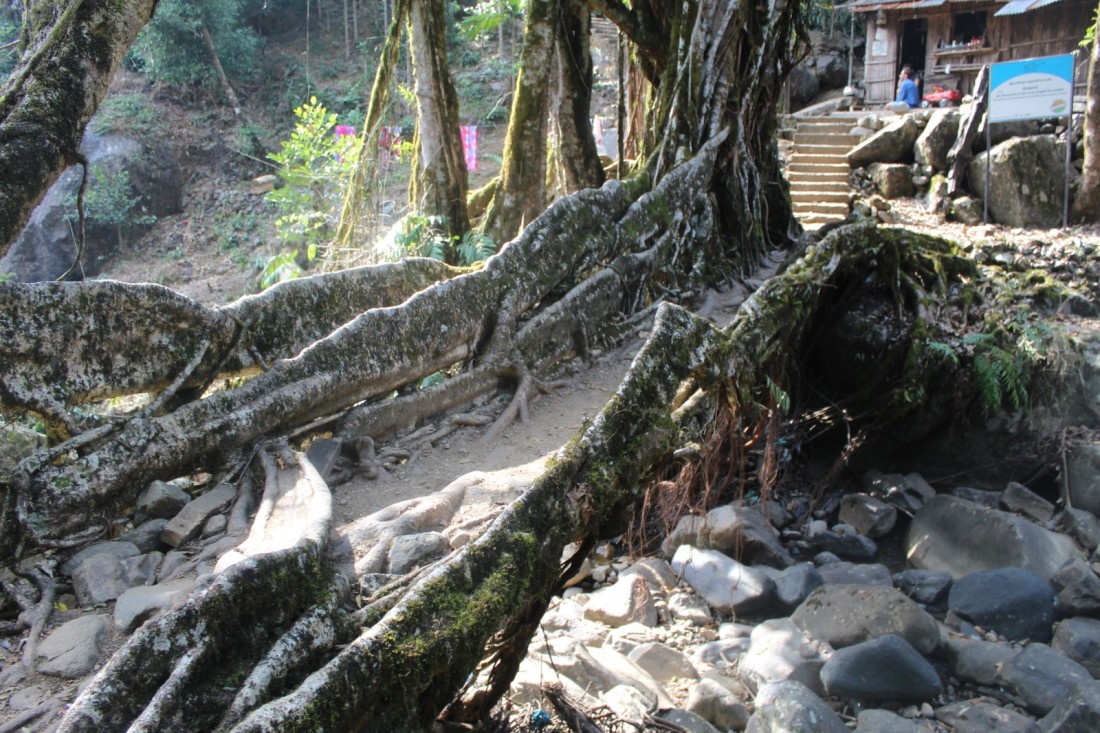 One of the more spectacular instances of these is the Double Decker Bridge, one root bridge over the other.

The Ritymmen root bridge is 30m long, making it one of the longest.

After wandering around here for a while, I returned to make the long climb back up the stairs. Shortly after I started, I passed a woman on her way down. I heard her counting out the steps – 1360, 1361, 1362… It took me a while to get back to the bike!

Once I reached the bike, I set about climbing back up the mountain I’d spent the morning riding down. The first section, rough and sandy, had me feeling glad I’d swapped out to lower gearing in Calcutta.

The clouds had cleared slightly, so I could see out over to the plains of Bangladesh.

On reaching the town of Cherrapunjee, having climbed 600m back up, I looked for a hotel. I tried five places, all of which were deserted – perhaps because it’s New Year’s Day? The sixth cost more than I wanted to pay so I rode on, looking for a place to wild camp. This took a while, as the road followed a mountainside, meaning there was little flat ground. Eventually I managed to get off the road and onto a grassy hillside. I found a place that was sort of flat, and just about large enough to put my tent. It was in long grass, and just about visible from the road, but it would do. 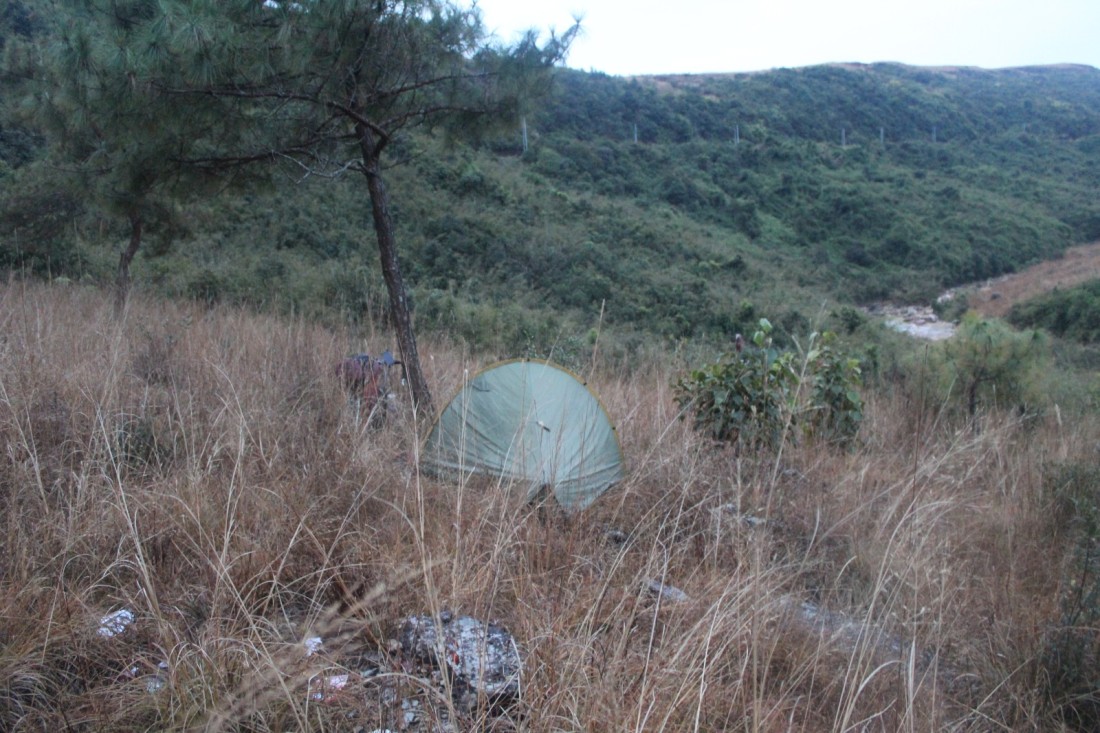 The climb continued for the first couple of hours, bringing me back to where I’d been yesterday. I then continued along on a rough road. There were no big elevation changes, but the road was rarely flat – lots of ups and downs with mountains all around. 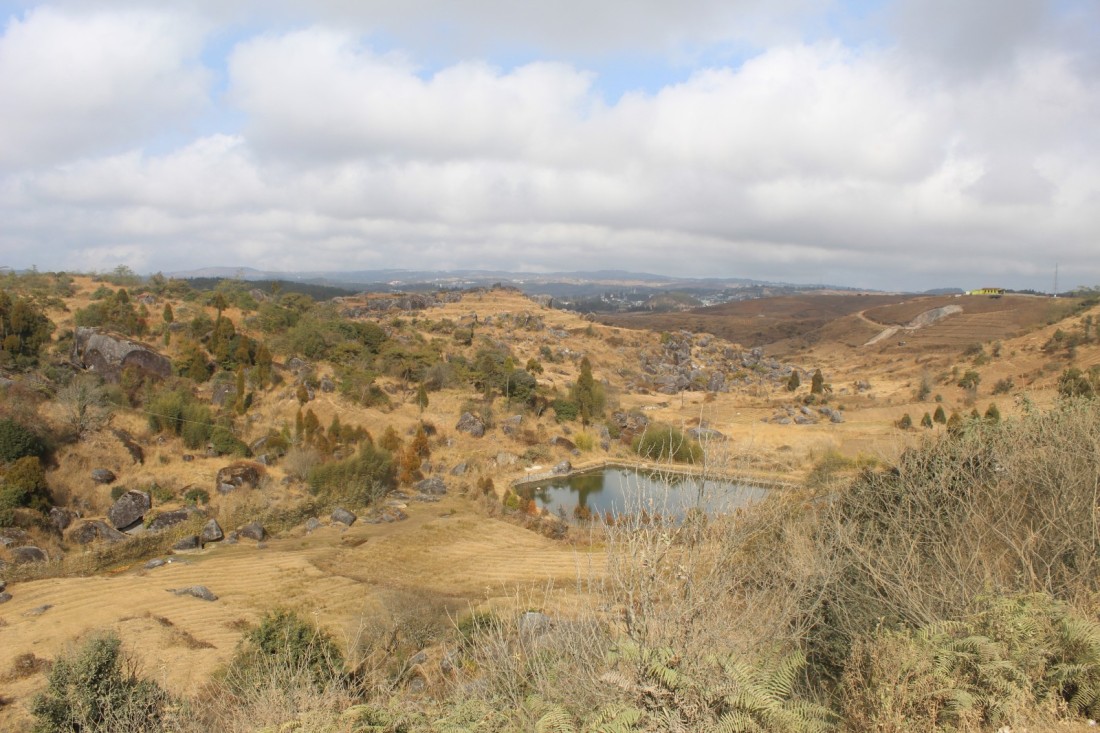 Rejoining a more major road, the descent began. For the rest of the day the road was almost never flat: downhill a bit more than up, but always one or the other.

In the evening I reached a forest, but because there was no level ground it took a while for me to find somewhere to camp. In the end I followed a small path away from the road, and set up camp on the path itself. From the way the path was overgrown it looked like it hadn’t been used in some time.

It started to rain a couple of hours before dawn, and continued to do so for most of the morning, as I rode all the way back down to sea level, where I crossed over a remarkably blue river.

After a couple more climbs and descents I crossed into the state of Assam, which primarily consists of plains. The people here are Bengali again, so the staring and crowding resumed. As in Bangladesh, there are many brick factories. Bicycles and tuktuks, which had been almost entirely absent in Meghalaya, were now prevalent. Instead of forests, I saw a few tea plantations. 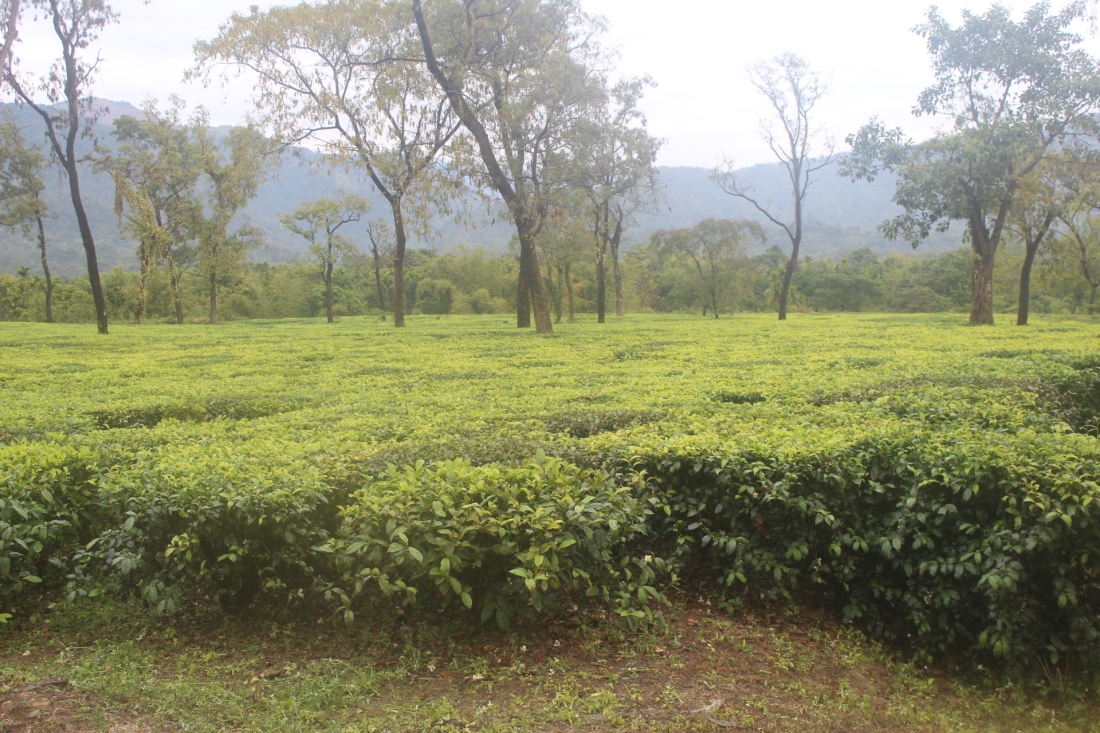 When I turned onto a shorter but more minor road, the surface immediately worsened. I did however, see two cycle tourists coming towards me. It turned out we were actually heading in the same direction but they weren’t enjoying the poor road and were going to return to the slightly longer highway route. I didn’t mind the road but it would be nice to have some company so I turned around and rode with Jamie (a Scot) and Night (from England). We rode together to Silchar, where we found and checked into a hotel.