After initially riding along the Hunza river, I reached the point where it joins the Indus. This place is the junction of the world’s three highest mountain ranges: the Himalayas to the east, the Karakorum to the north and the Hindu Kush to the west. 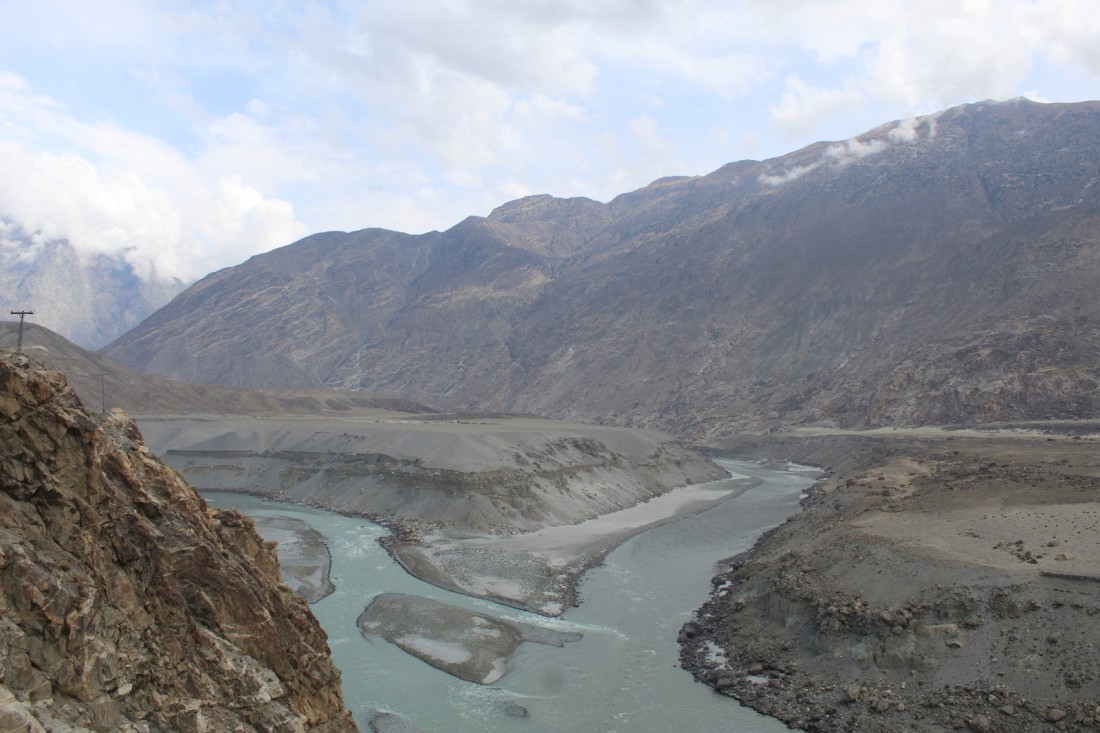 Shortly before the turnoff there was a viewpoint for Nanga Parbat. With a peak at a whopping 8126m, Nanga Parbat is the ninth highest mountain in the world, and represents the western end of the Himalayas. Unfortunately clouds obscured the view somewhat. 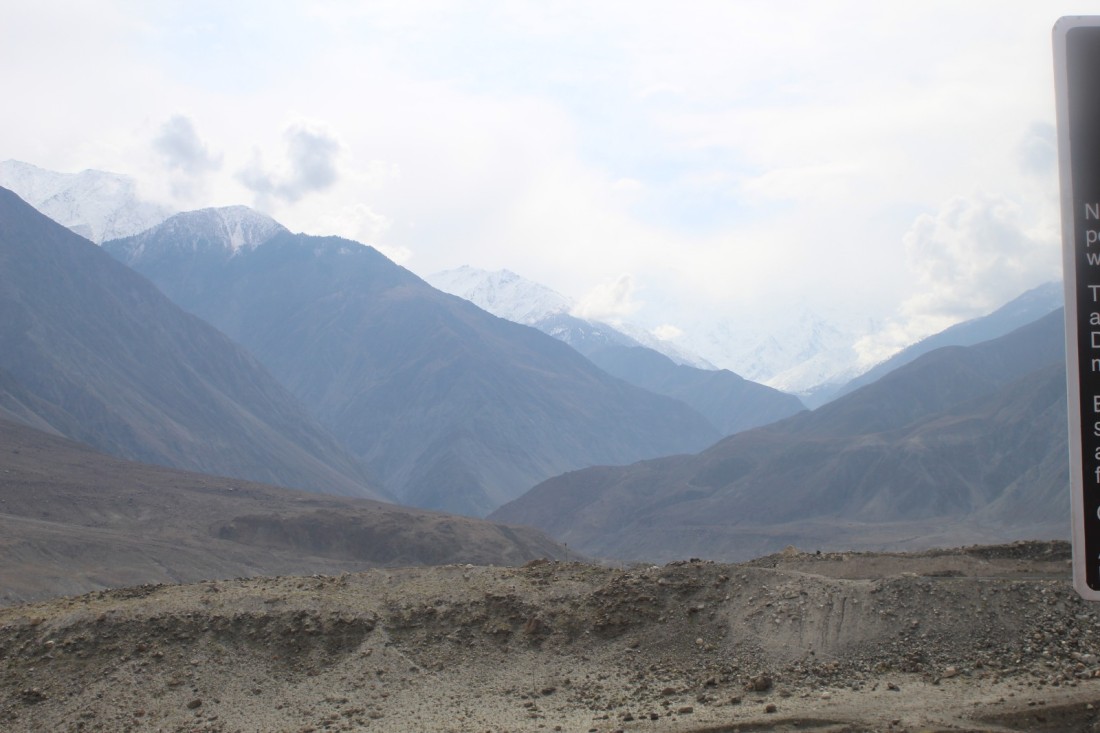 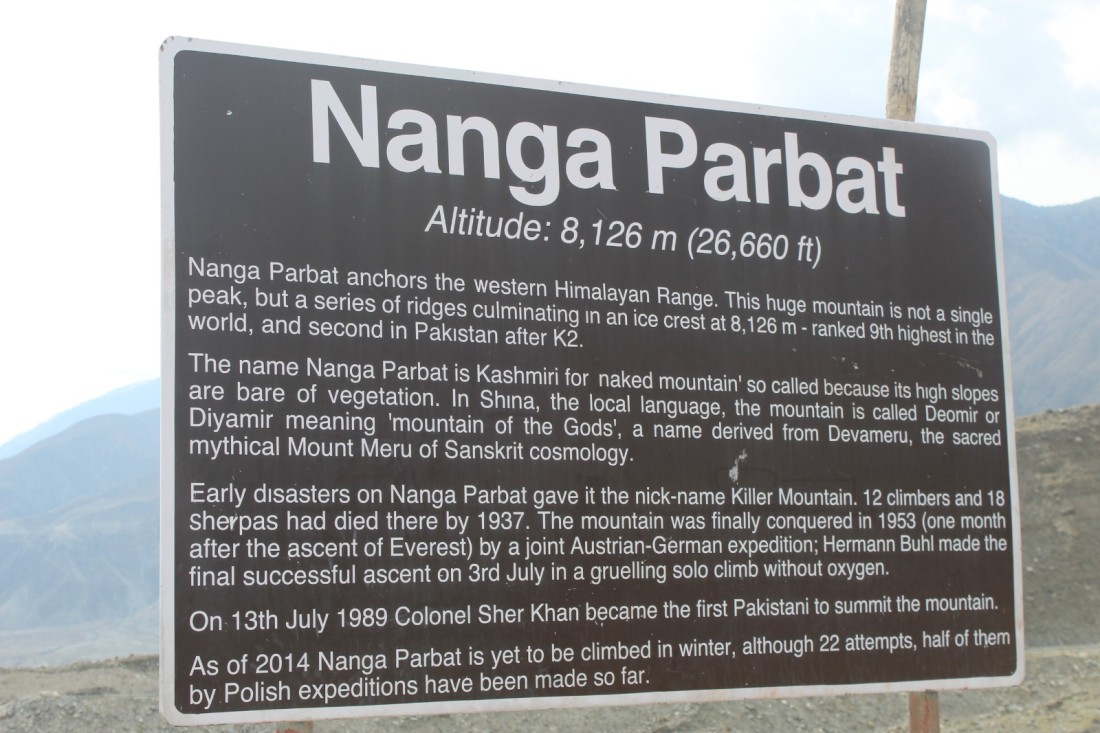 The Karakorum Highway continues along the Indus River but I planned to take a detour to visit Deosai National Park, a Himalayan plateau at an elevation of some 4000m. The hostel owner in Gilgit had thought it might be closed due to the recent bad weather, which would have meant snow at that altitude. He recommended checking with the police nearer the turnoff.

There were two policemen at a checkpoint, so I asked them if Deosai was open. One said no – but in a way that gave me the impression he was making up an answer to avoid seeming ignorant. The other – more honestly, I thought – said he didn’t know. I decided to try anyway, crossing the Indus and beginning a long, 3000m climb up the Astore valley. 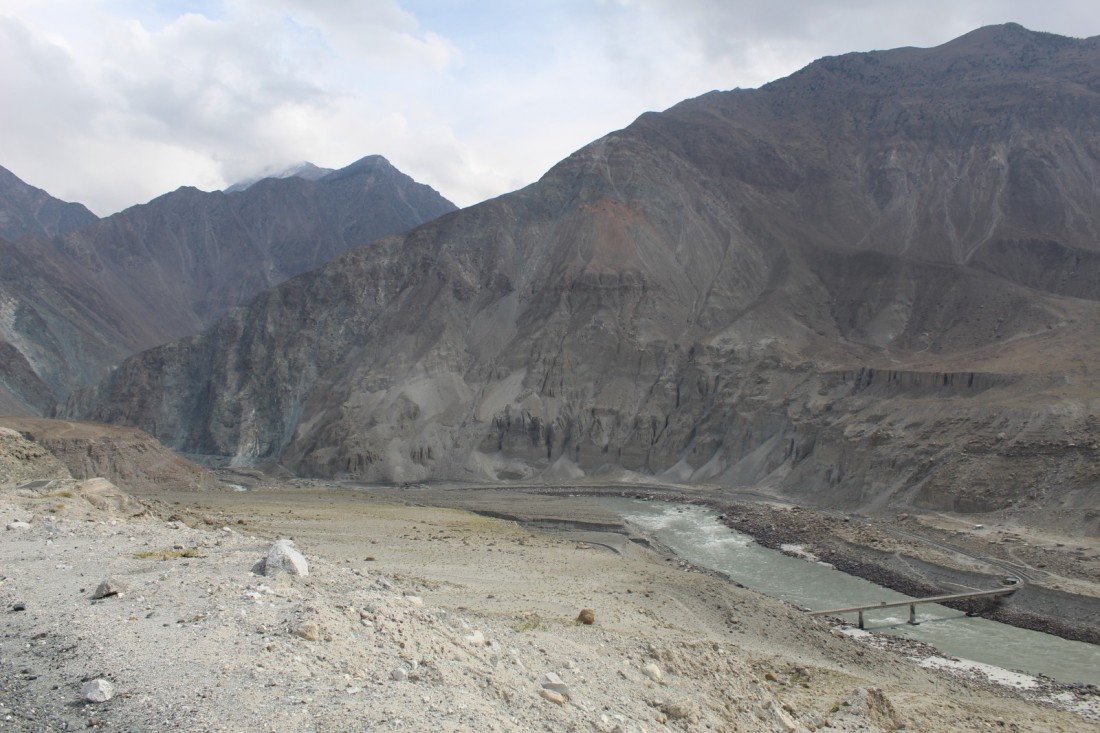 3000m is a long way up and, though I didn’t intend to do it all in one day, I hoped to get a significant amount of the climb done so that I would have a better chance of crossing the plateau and descending to warmer weather tomorrow. I slowly made my way up, on a surprisingly decent road.

A bit of a delay came when a motorcyclist asked me to stop and help – he’d had a puncture. It took quite a while to get his tyre off, to begin with. He didn’t have tyre levers and instead used a spanner and screwdriver. This was far from the strangest part of his methods!

Once we had the inner tube out we used my pump to inflate it and search for air leaks, watched by a few people who had gathered to stare. We found the holes (there were two) and started patching them. I put some of the glue on – and the guy took out a match and lit the glue on fire. Once the fire burned out he put on one of my patches, then started hitting it with a spanner.

A couple of the patches failed until I was able to convince him to let me do it my way (which involves neither fire nor hammering). With the tube now holding air we replaced the tyre and pumped it up. I then resumed cycling. 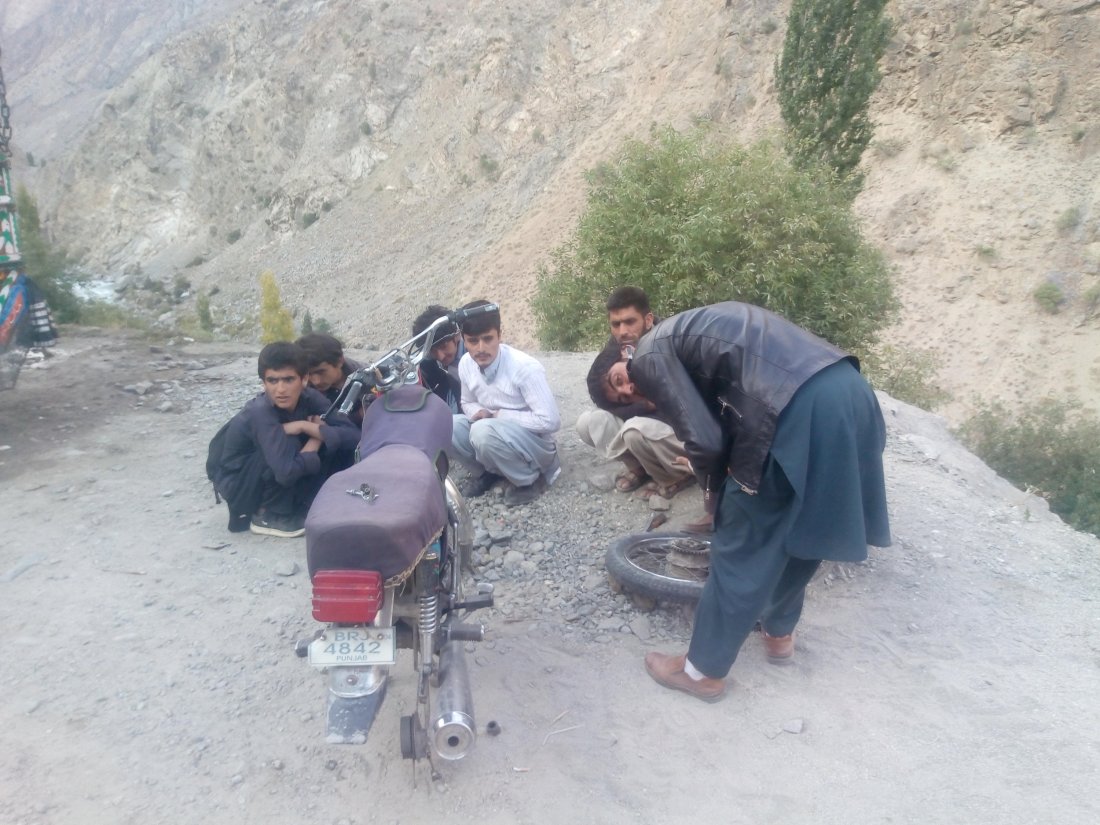 I continued riding until late – slightly after dark, in fact. I reached a village and stopped at a guesthouse. The owner wasn’t there but Sardar, a local government official, contacted him on my behalf. I waited in a shop with Sardar and the shopkeeper. They repeatedly insisted I’d just need to wait five minutes, but the understanding of time is different here and I didn’t expect that to be true. While waiting I asked them about Deosai, and they were both adamant that the road would be completely blocked by snow and totally impassable. The guesthouse manager arrived after an hour or so and I checked in.

I left at six in the morning, a few minutes before sunrise. I’d been cycling uphill for an hour or so when a policeman approached, riding in the other direction with a rifle slung around his shoulders. He gestured for me to stop but continued on for a bit before stopping himself – his brakes didn’t seem to work very well.

After managing to stop the bike he walked back to me and asked where I was going. When I said I was going to Deosai he told me the road was closed. Due to the snow it would be impossible on a bike, he claimed. I asked if it was open for cars and he said that although it would be doable for a car, it was impossible on a bike. In my experience there are very few situations to which that statement applies. I thanked him but kept on riding. 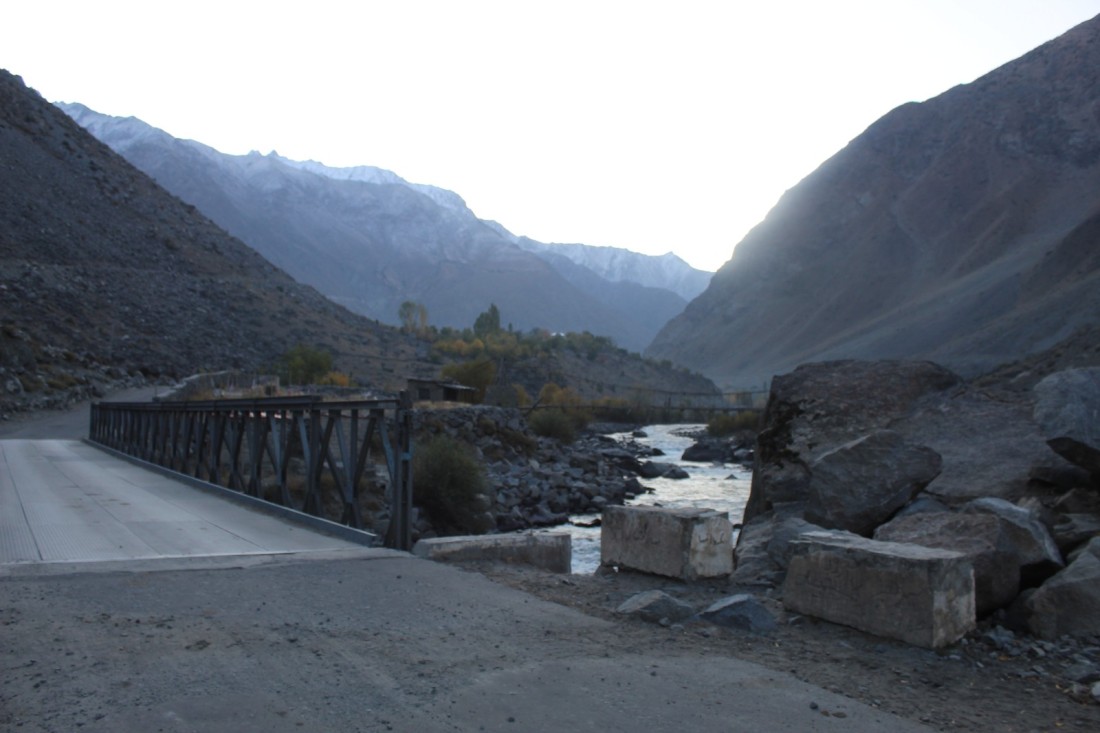 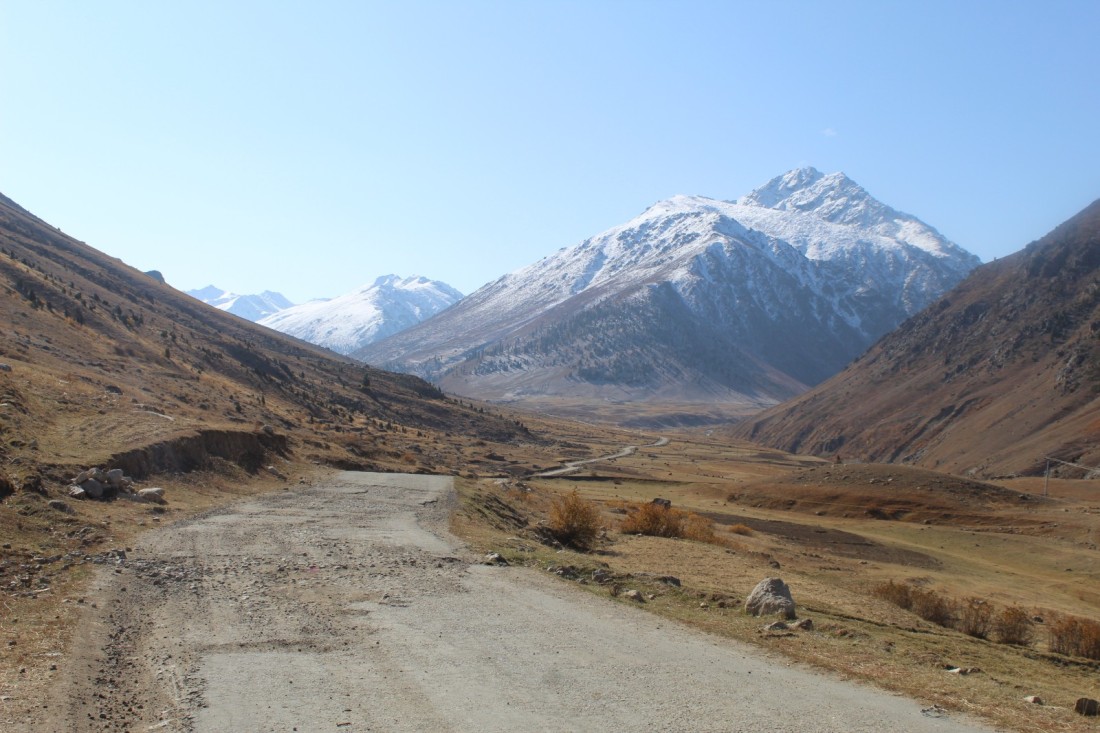 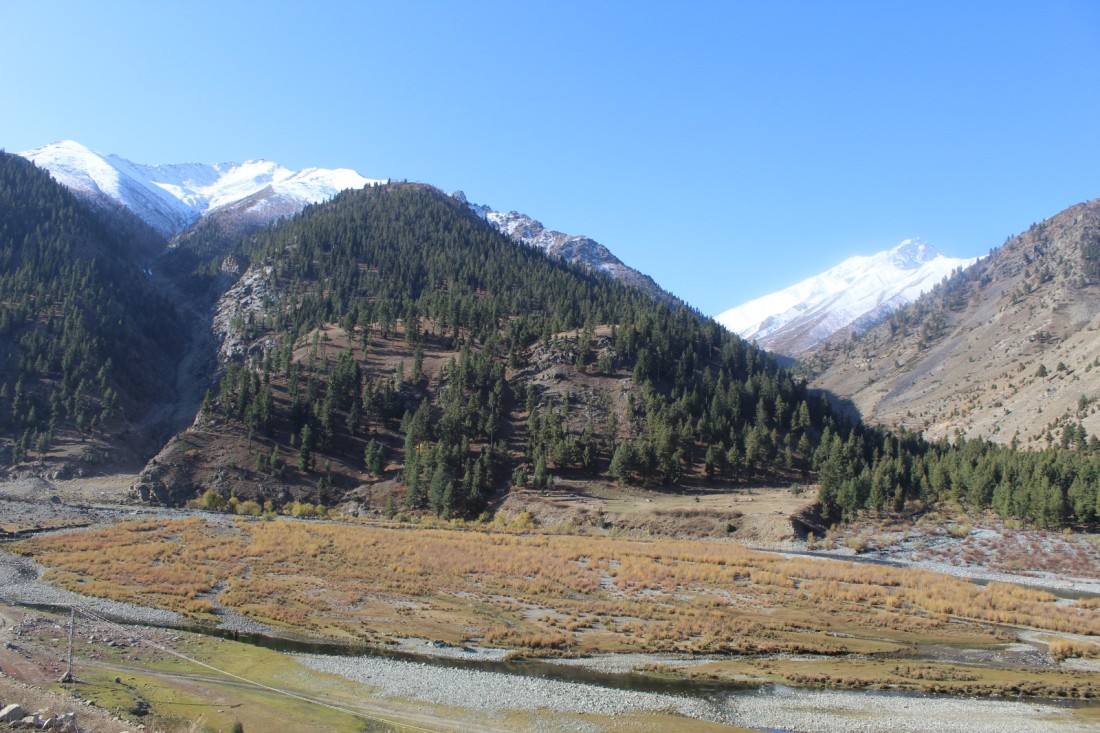 Shortly afterwards another motorcyclist stopped to tell me the road through Deosai wasn’t passable. He said the road was muddy and covered in snow. I asked how deep the snow was — 33 kilometres, apparently! I think he may have misunderstood the question…

Again I decided to keep on going. A large convoy came past of perhaps a hundred people, mostly on motorbikes but some packed into pickup trucks. They were waving black flags – I’ve no idea what this was.

After about three hours riding I approached a military checkpoint. I expected to be told again that the road was impossible. I arrived ready to argue my case, to point out that I had lots of experience riding in mountains, snow and cold, and to assure them I’d come back down if the conditions were too bad.

The soldier asked if I was going to Skardu (the town beyond the mountains). I confirmed that I was, and handed over a copy of my visa. After conferring with the other people there he said “Ok. You can go.” Huh – that was easier than expected.

A few hundred metres later was the place to buy tickets. There was no-one there so I let myself through. I wasn’t trying to evade paying though so I stopped for a break, to give the park employees a chance to show up. They did so after a while and I paid the fee. I asked about snow and they assured me the road was completely clear. That was much more optimistic!

I continued cycling, on a road that was now somewhat steeper. I rode along in my lowest gear (which isn’t very low) and made my way up the mountains, stopping quite frequently to photograph the mountains around me. 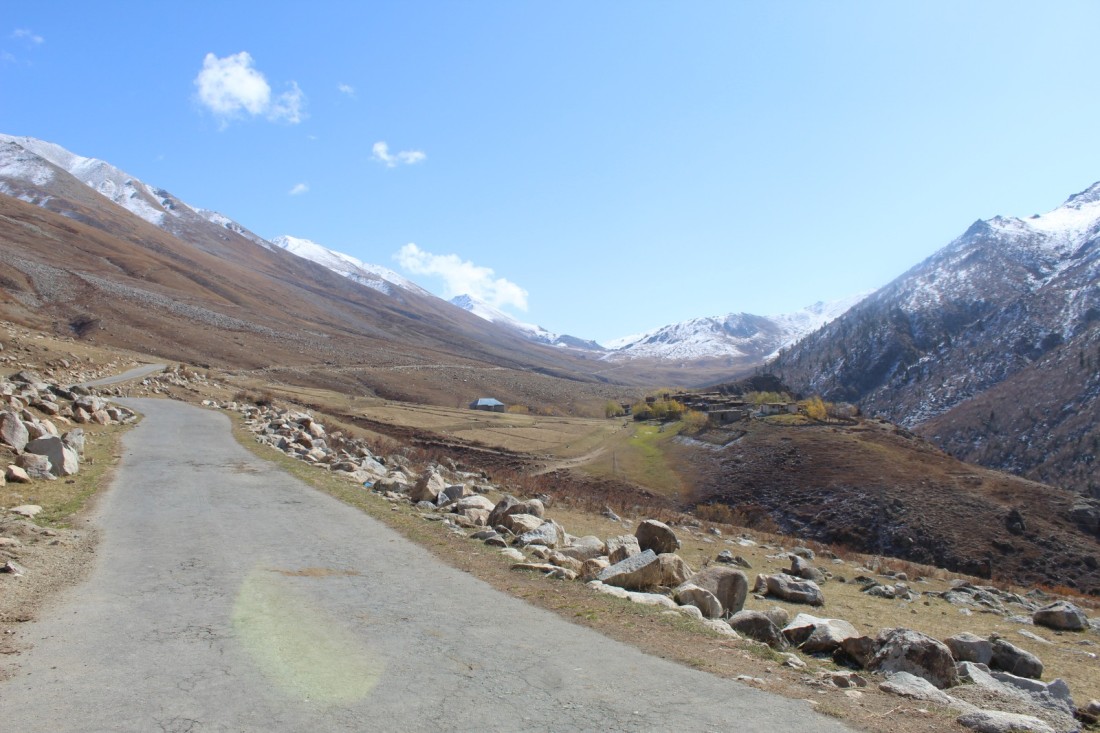 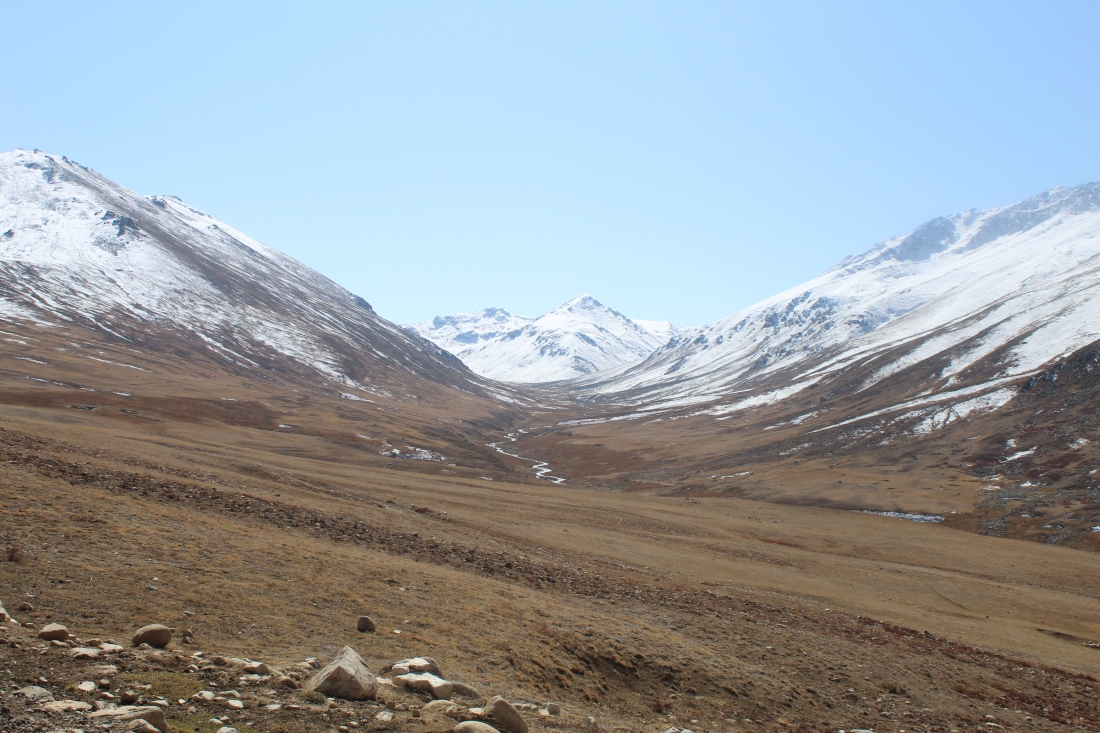 The road was indeed clear of snow, with one exception. I rode through several streams that crossed the road, one of which (at about 4000m asl) was coated in ice and snow. I pushed across that one. 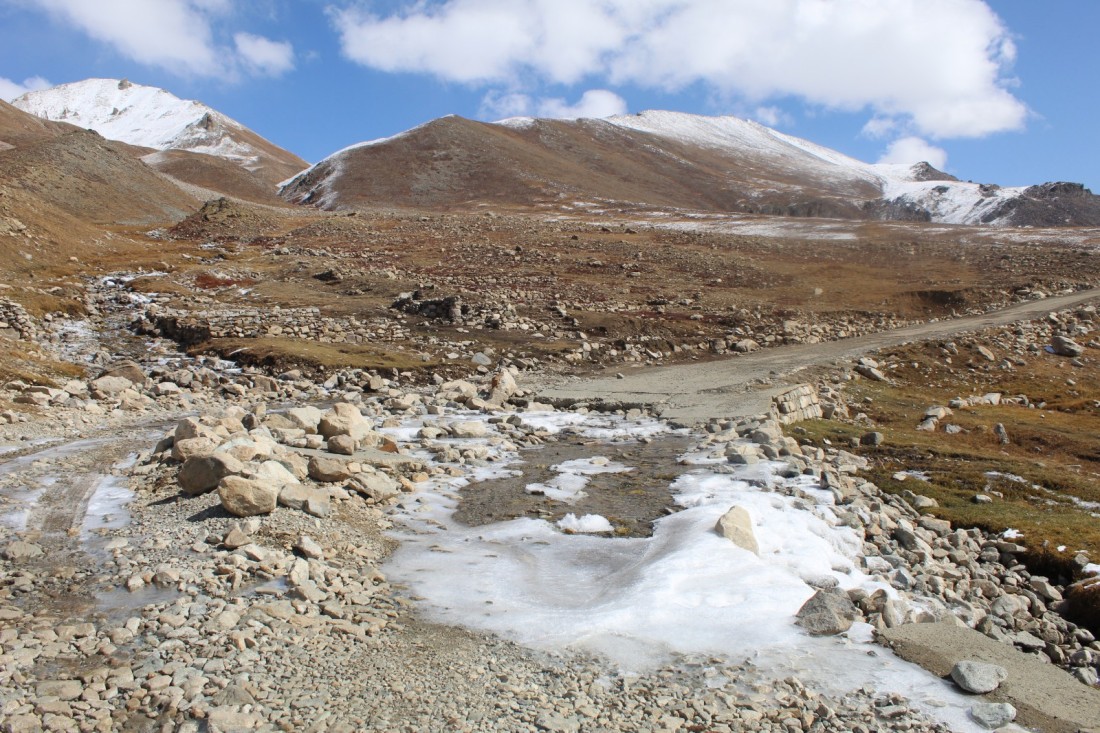 The tarmac came to an end just as the road became a lot steeper. I had to push for a few hundred metres until it levelled out again and I reached the pass, at a height of 4200m. The view from the pass, looking out over Shausar Lake, made me very glad I hadn’t listened to the advice of all those who’d told me the road was closed. 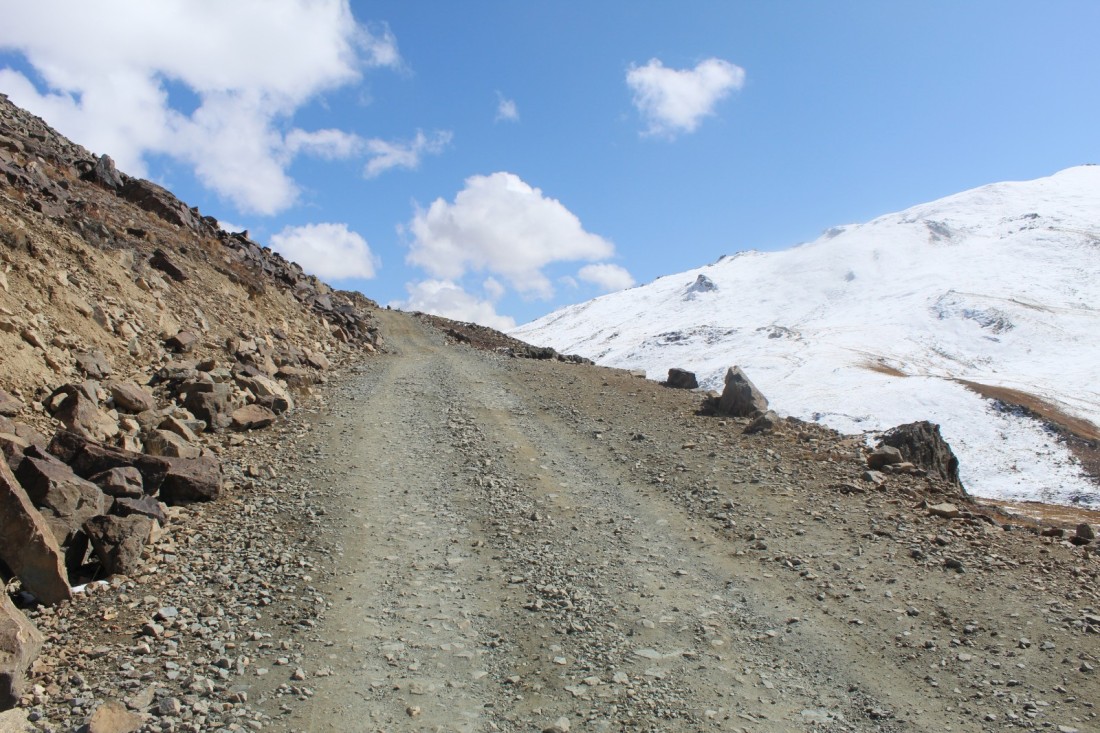 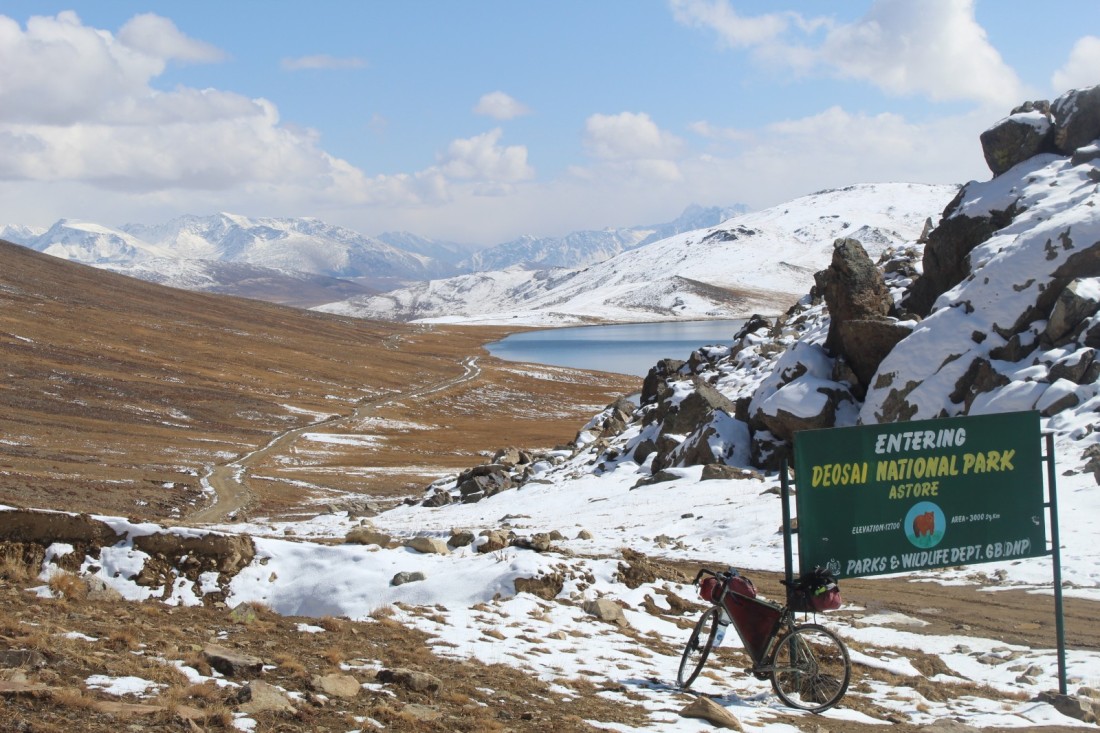 From the pass the road dropped slightly and made its way across the Deosai plains. For the next few hours I rode along the bumpy track through the national park, with excellent views all around. 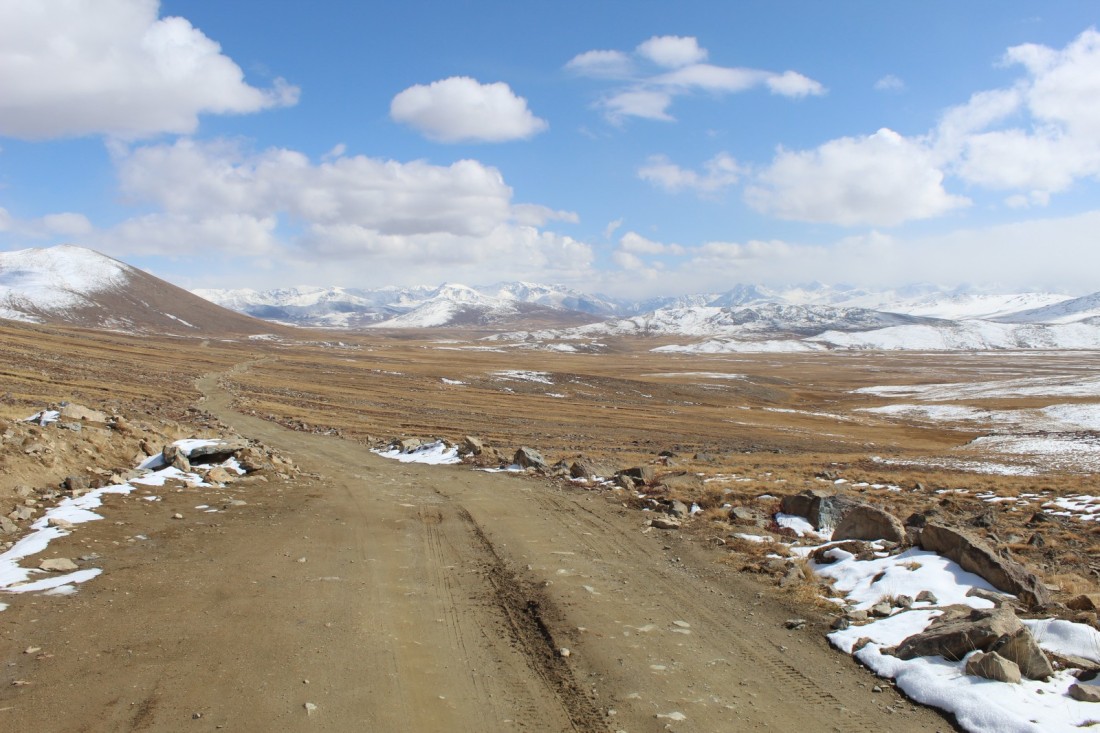 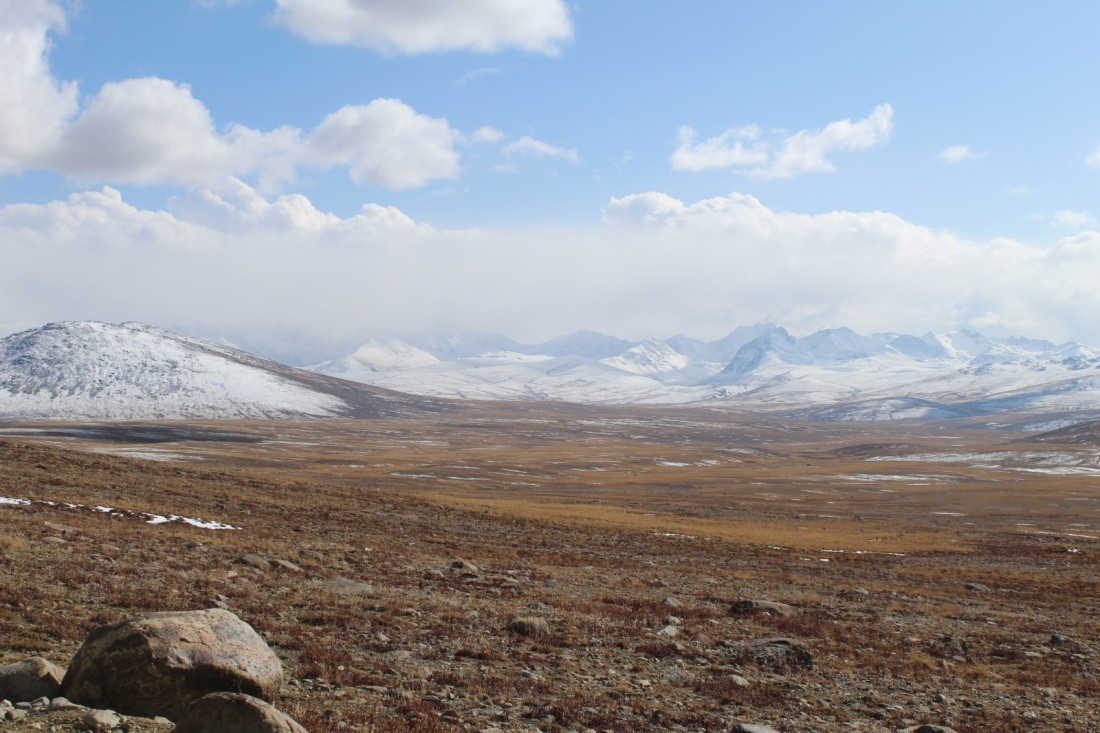 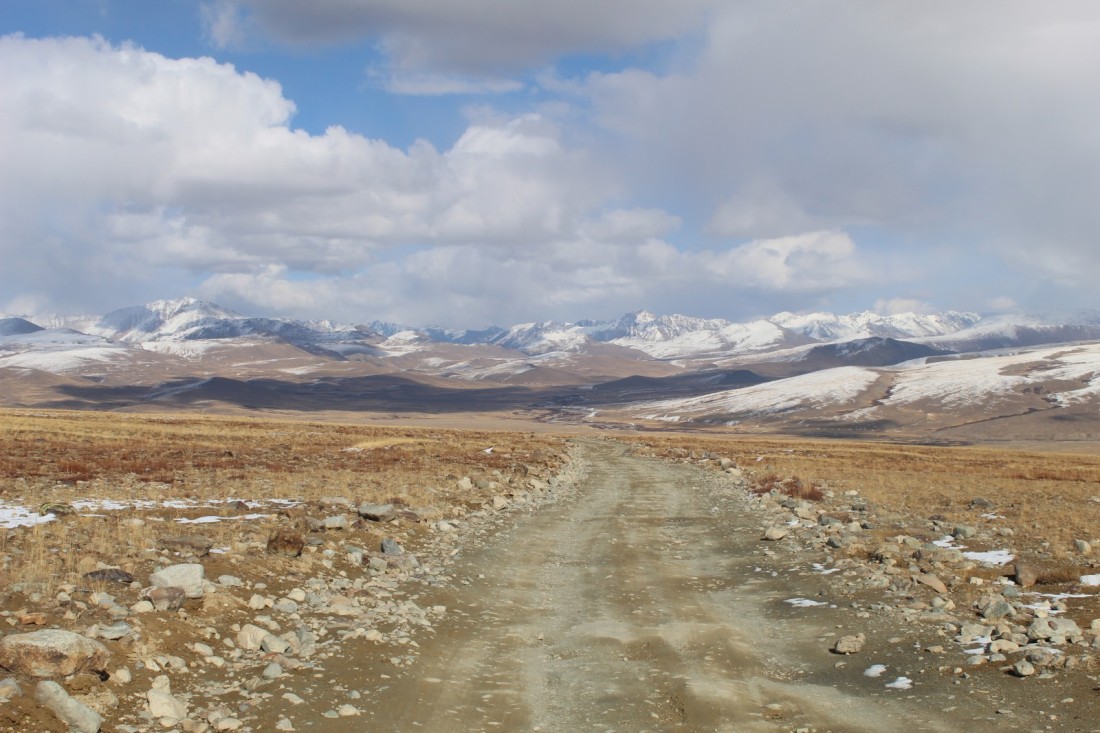 The sun went behind some clouds and it began to get colder as I climbed up the short pass at the far side of the plains. Up until then I’d only been wearing shorts and a jersey; now I put on a coat as well.

I reached the pass a little after 4 o clock. The road dropped away steeply on a rough gravel surface. I’d originally planned to ride this section the other way around and was glad I hadn’t – this would have been a tough climb! The descent put a lot of wear on my brake pads. 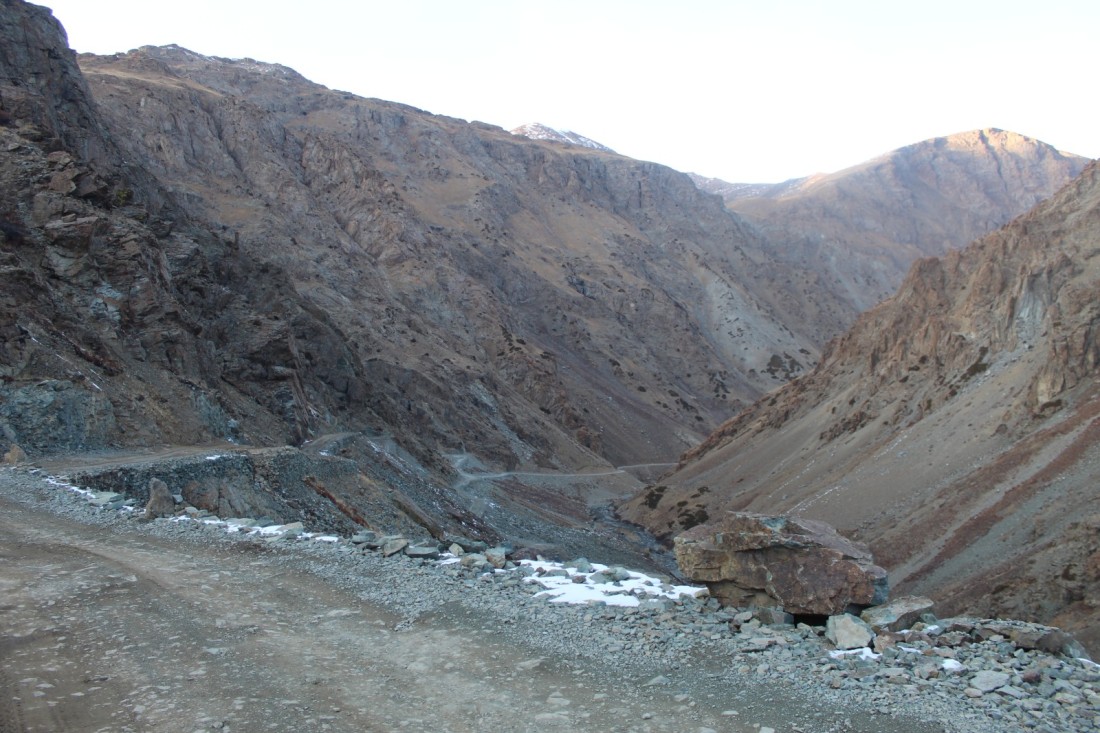 I wanted to get out of the national park today so I continued riding on after sunset. It was still just about light when I reached the checkpoint, where my passport was checked. The guy there told me there was a hotel in a couple kilometres so I kept on riding. Twilight was just turning to night when I reached the hotel and checked in.

That was a long day so I had a lie in the next morning. I set off a few hours later than usual, after pumping my tyres up to a higher pressure in anticipation of a better road surface. That was overly optimistic!

The road was badly potholed, where it hadn’t been destroyed entirely by landslides. I rode alongside a lake formed by the damming of the river. One of the blogs I read, from 2009, had to bypass a standoff between police and protestors on this road. The formation of the lake apparently submerged many homes. 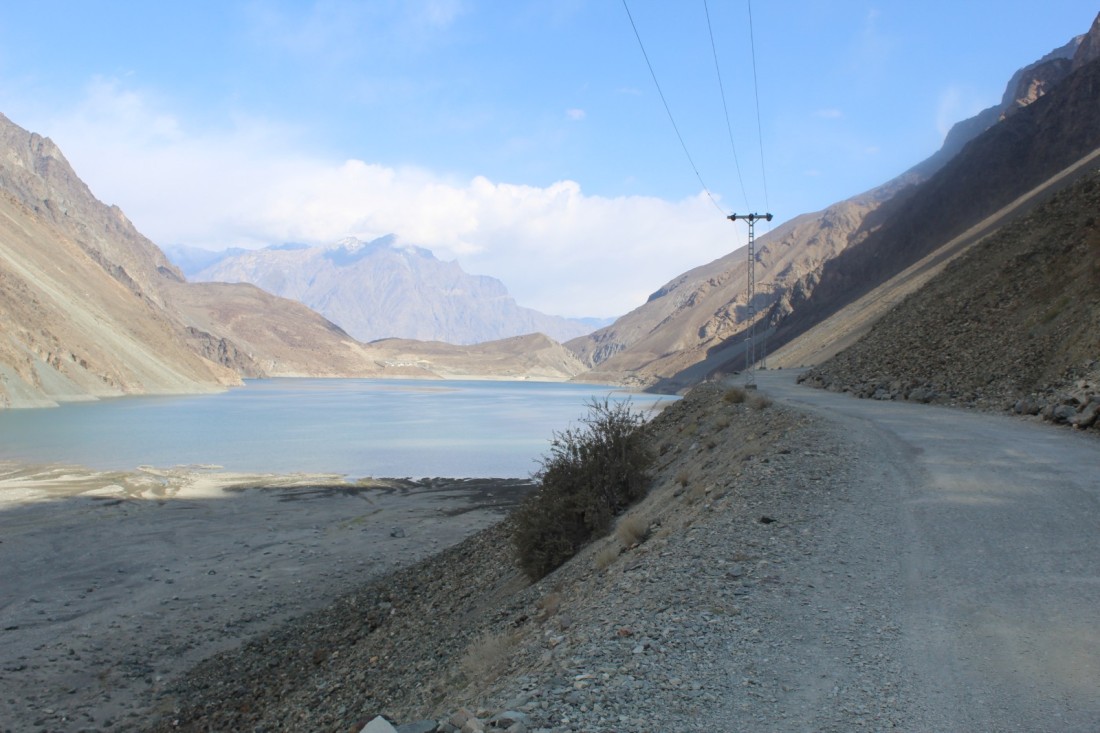 After this the road continued to descend, with lots of sharp switchback turns. Soon the valley opened up as I approached the town of Skardu. 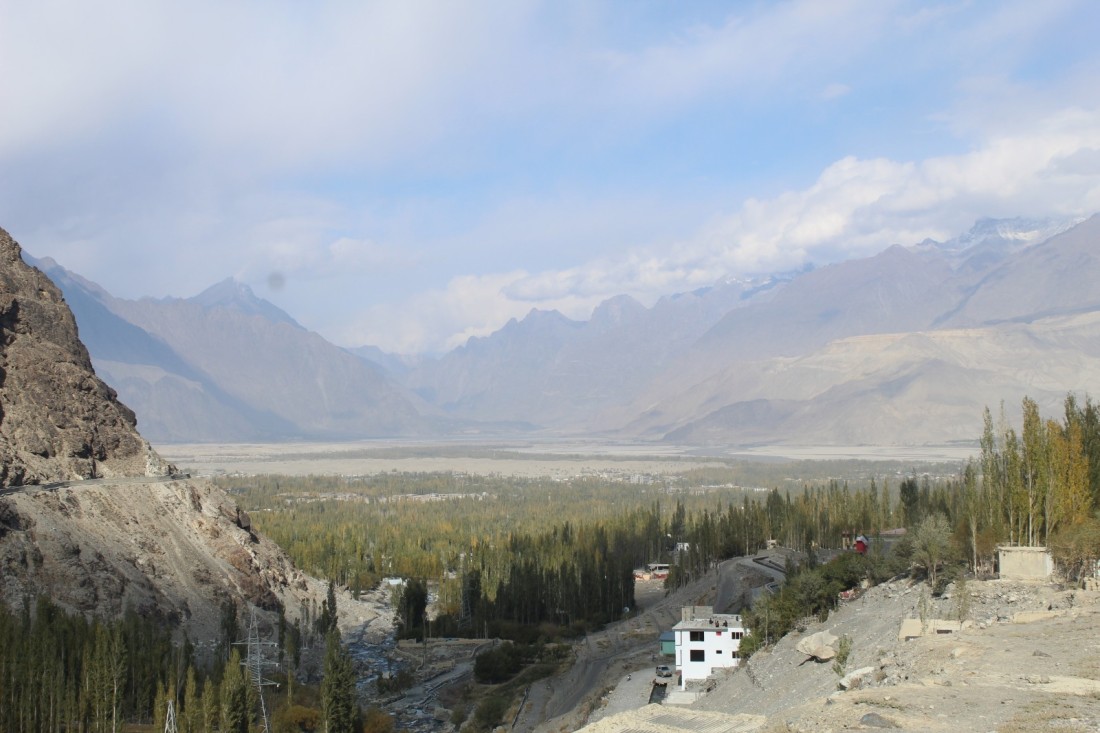 Skardu is a fairly large town which comes with corresponding traffic. After dodging cows, goats, cars and hundreds of motorbikes, I reached the Indus River. 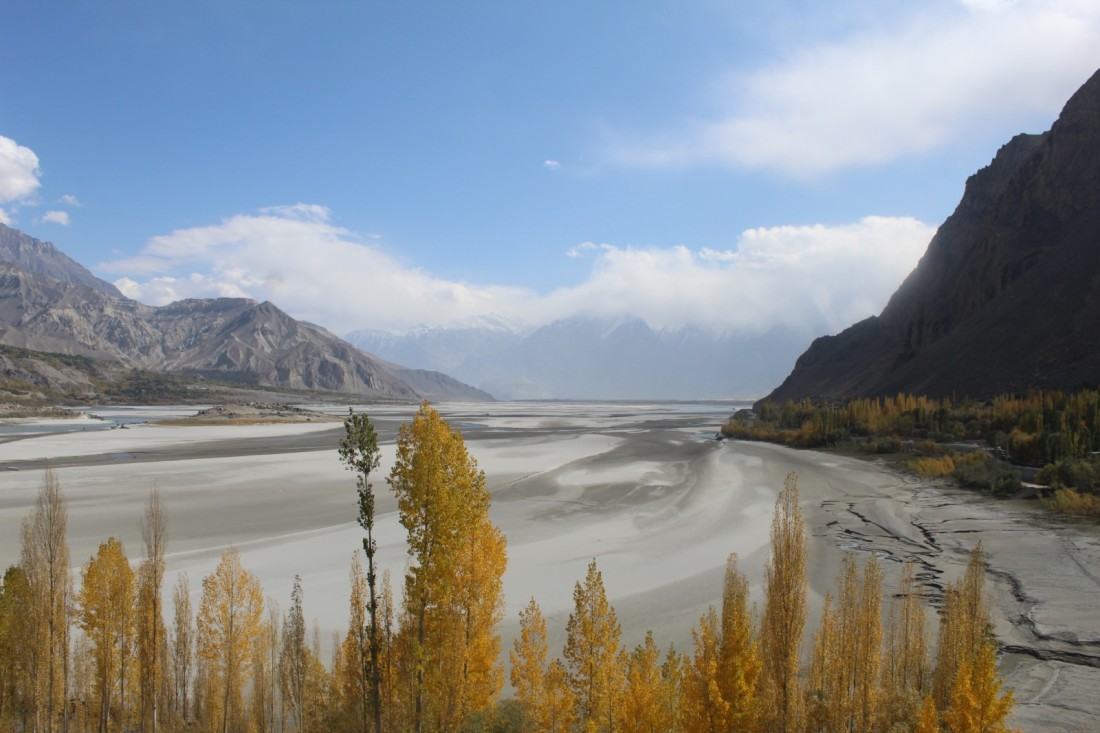 I followed the Indus for the rest of the day – well, for several days in fact. The road was mostly unpaved during this stretch, with lots of construction work. In most countries truck drivers seem not to notice road conditions and fly along at ridiculous speeds. Here it was almost the opposite, and I frequently overtook trucks going at 5-10 kph.

There was lots of roadwork going on causing occasional queues to build up where traffic had to wait. I was able to get through, though – one of the advantages of being on a bicycle. 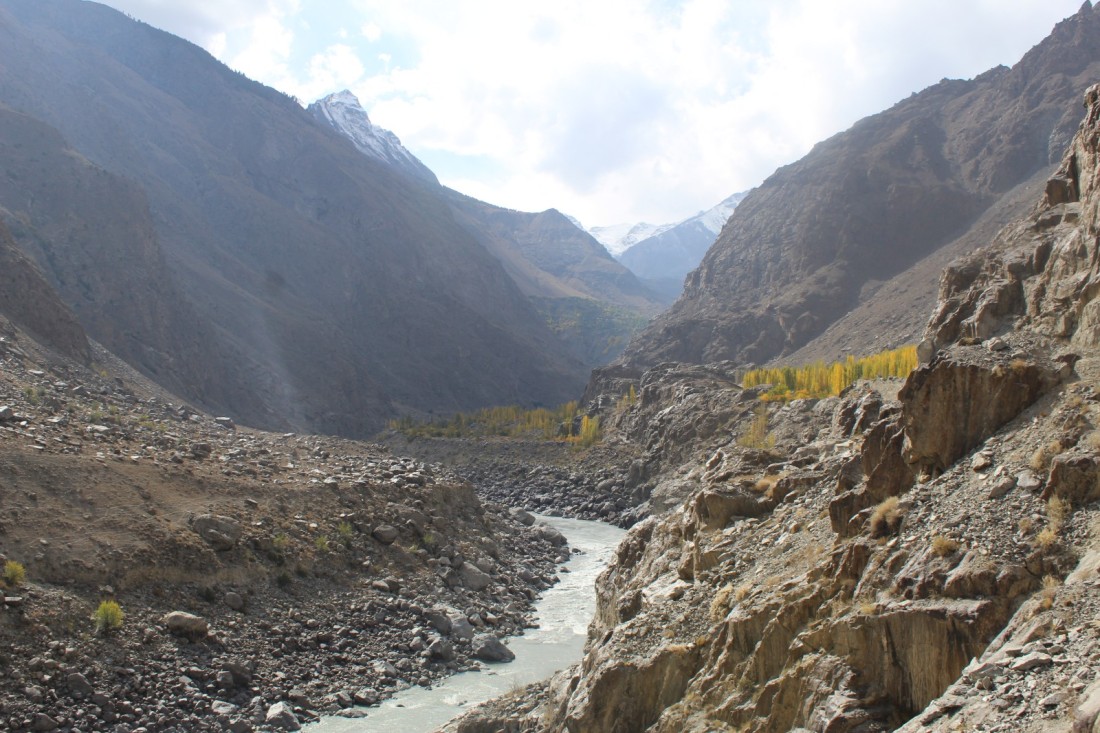 One might expect a road following a river to be reasonably flat – slightly downhill in this case, since I was riding downstream. There was still lots of climbing though, with the road at one point climbing to about 250m above the river. 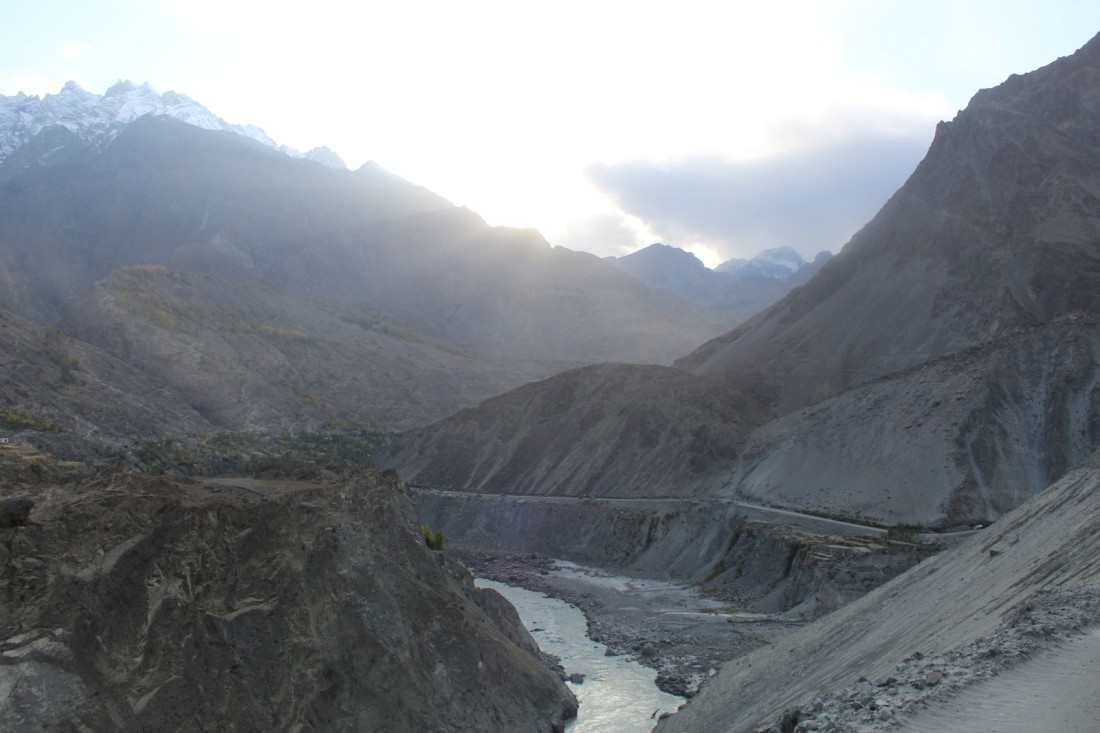 I passed a couple of police checkpoints. There are about as many as there were in China, but these ones are a lot quicker. I simply hand over a photocopy of my e-Visa and can keep riding. In the evening I did so, then realised a minute later that it was my last copy! I went back and got it, after waiting for them to copy my details down into a logbook. I wonder how many such books my details are written in now…

Around sunset I reached a small village. There was a cheap hotel where I checked in for the night. It wasn’t the nicest place but for 1000 rupees (£5) one can’t really complain. For once I left the bike outside, as the hotel room was at the top of some of the steepest stairs I’ve ever seen. 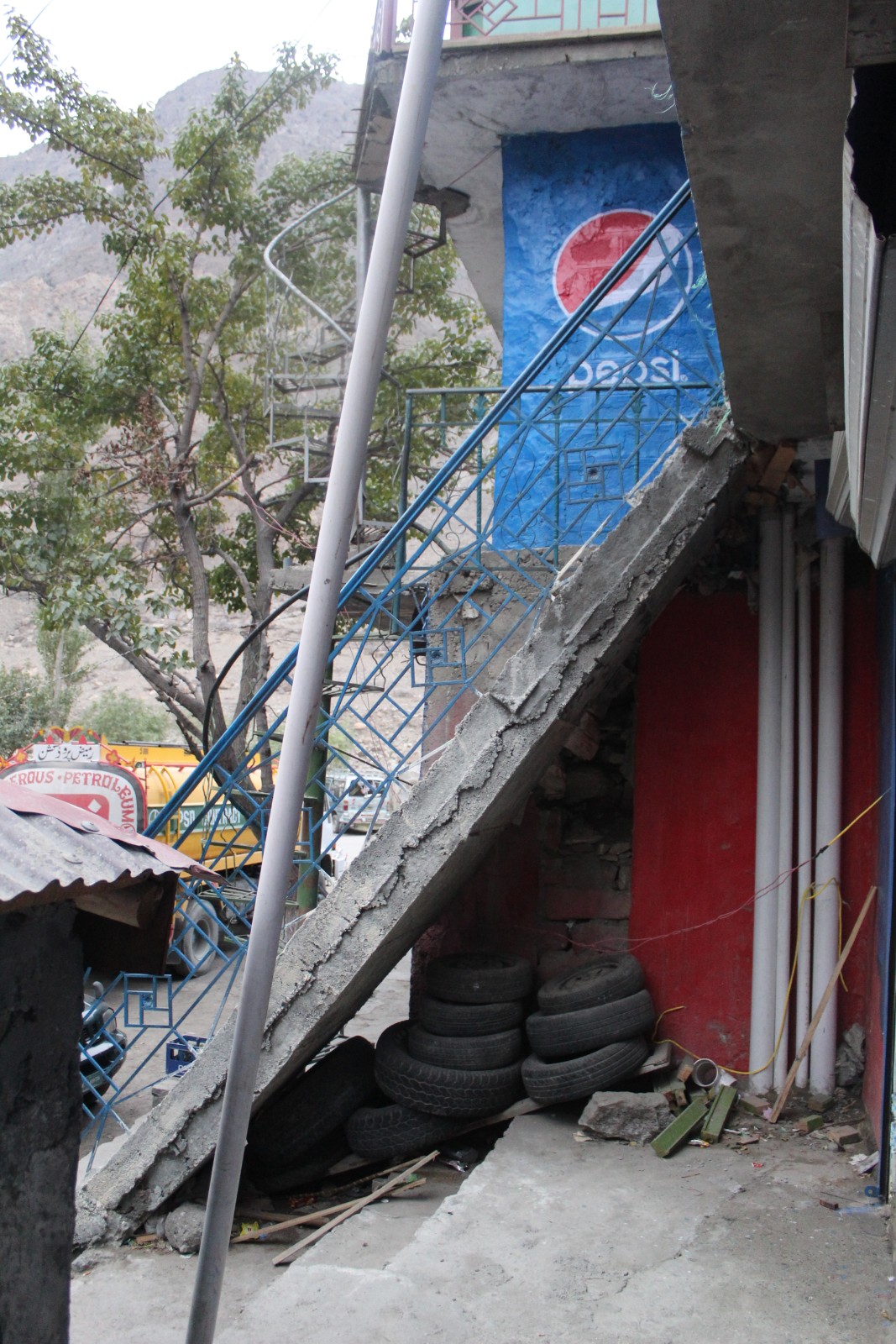 I set off at dawn the next morning. The road conditions continued to be poor as I slowly made my way along the Indus River. 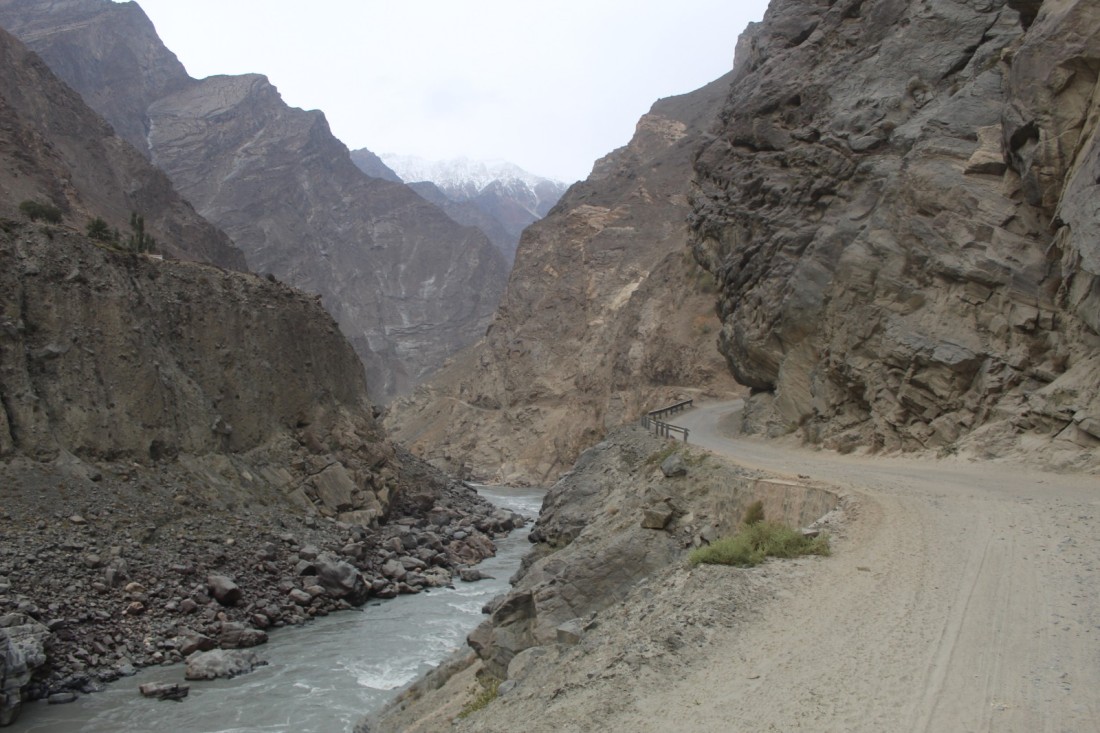 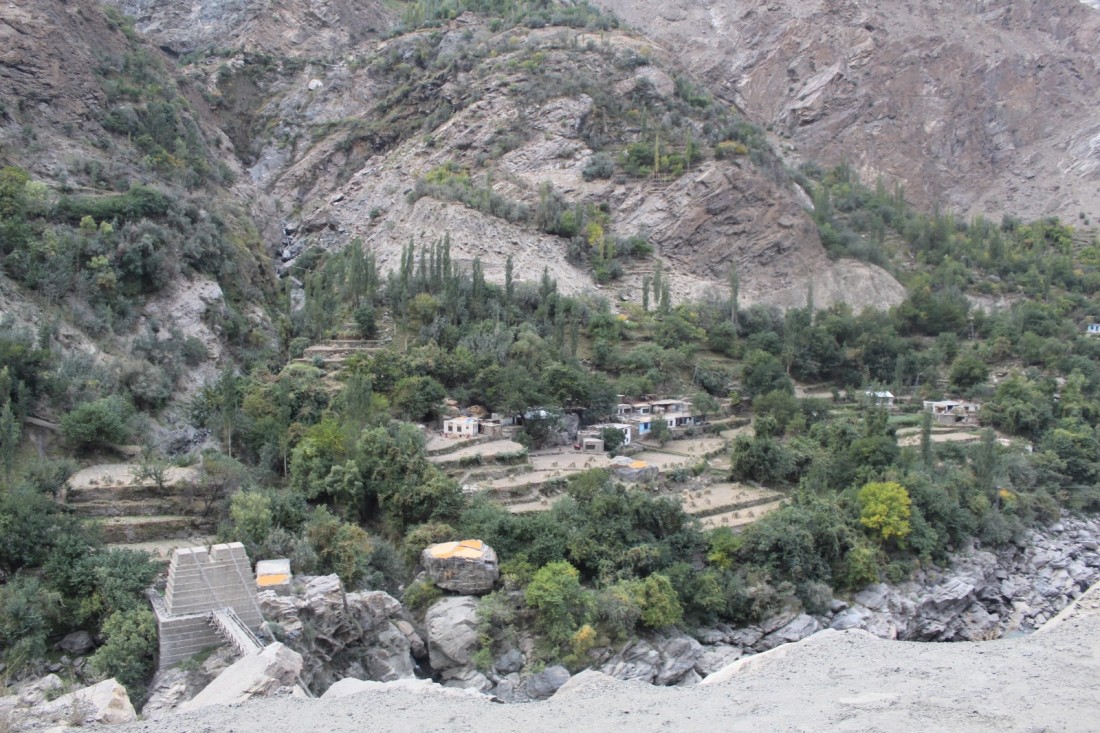 As yesterday, there were frequent roadworks. Most of this was done by hand. At one point, I saw a man standing atop a massive boulder, about the size of a car, trying to smash it with a sledgehammer. I can only imagine what that did to his back. At times, there were heavy machinery involved but at a rate of perhaps one for every fifty labourers. 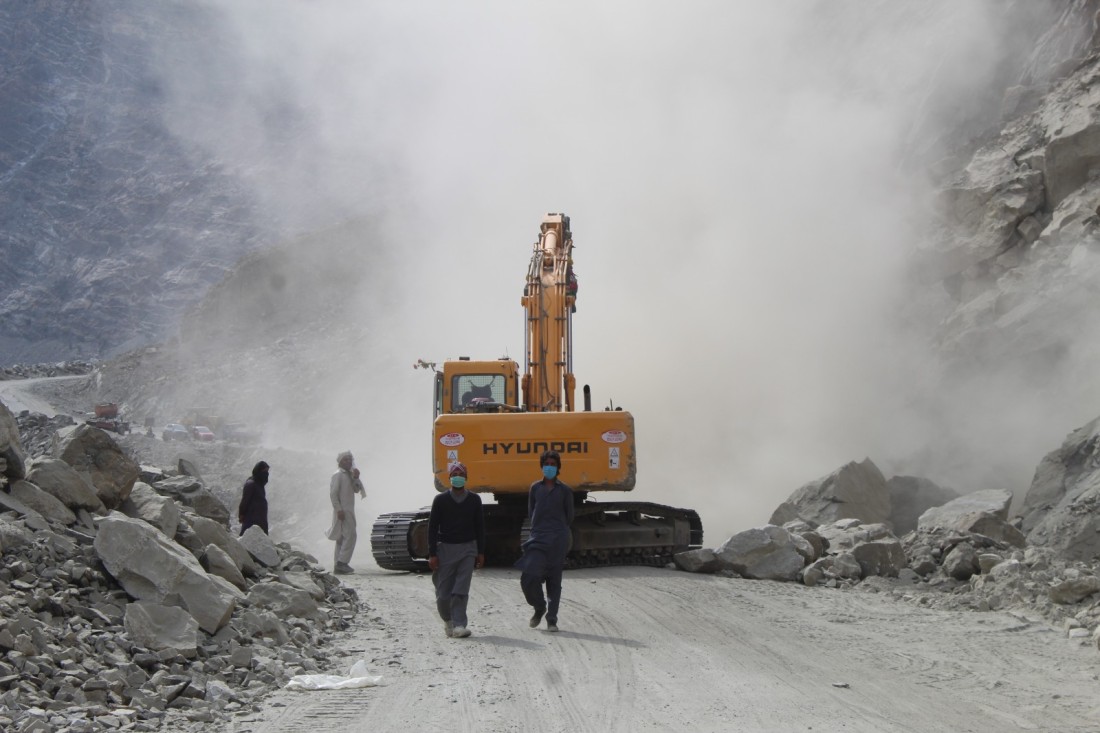 Being on a bicycle I was generally able to squeeze past the roadworks whereas cars had to stop for long delays. On some occasions I would be waved through by the labourers, but the machinery operators didn’t get the message, and I had to dodge diggers and rocks.

After several hours riding I reached a point where the road had been newly surfaced with tarmac. From there, it wasn’t far until I returned to the Karakorum Highway. I rode to the first town then stopped at a hotel. It was a surprisingly nice hotel for the price, so I opted to take a rest day. 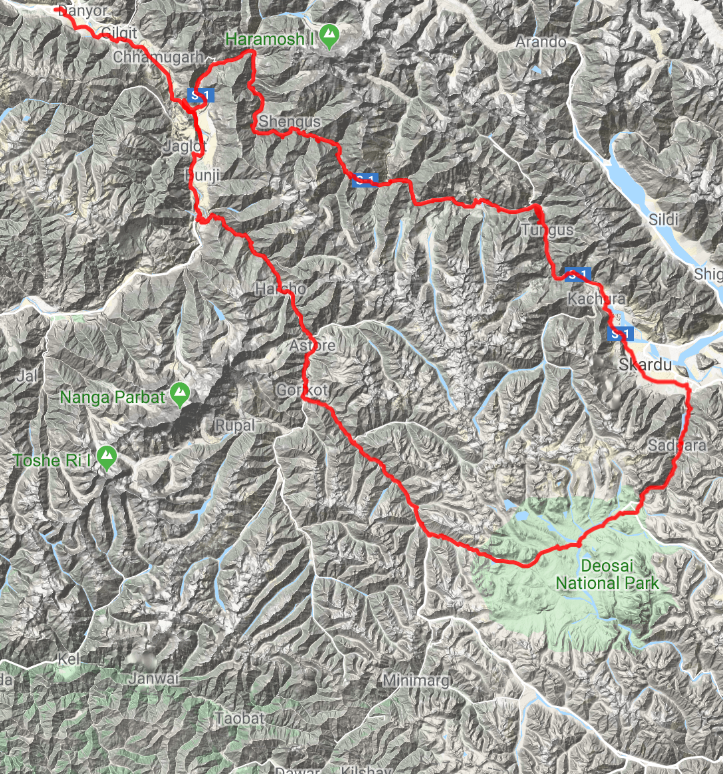