On the Pakistani side of the Khunjerab pass, cycling is permitted. Therefore I planned to cycle back up to the pass, so that I could ride the Karakorum Highway starting from its highest point.

This involved a climb of a little over 2000m so I set off early, just before dawn. The customs post at Sost was unmanned at this hour but on a bicycle I was able to get past. I rode on a gentle incline next to a river in a narrow, high-walled canyon. 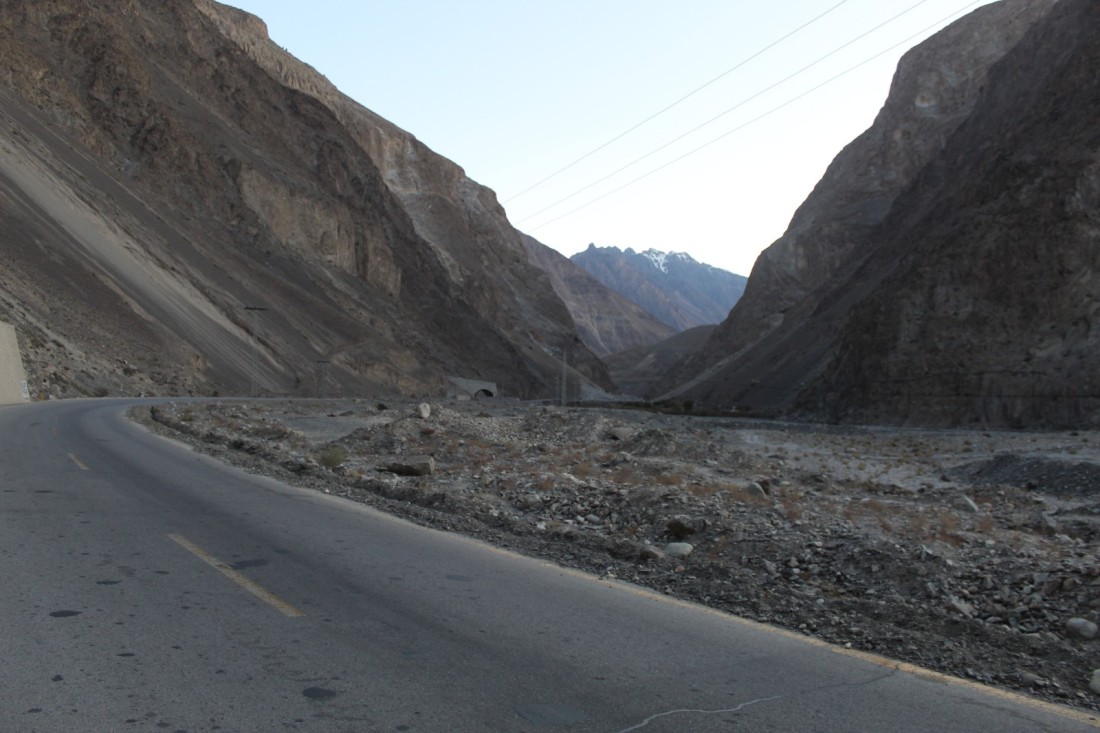 I saw a few trucks early on, who had presumably camped out there overnight. After that I had a long spell of traffic-free riding on excellent tarmac, a rare combination. After a couple of hours I reached the entrance to the Khunjerab national park, where I had to pay the entrance fee of 1,300 Rupee (£6.50). Then there was another customs post where my details were entered into a logbook.

Shortly afterwards the sun came out. It was almost three hours past dawn but the narrow canyon had provided shade. As soon as I left said shade there was a welcome increase in temperature, from around freezing to several degrees above.

The road continued its gradual climb for another couple of hours, then turned away from the valley and climbed along a series of switchbacks up the valley wall. This steeper section was still only about a 4% gradient.

The traffic increased slightly here and I got lots of waves and As-salamu alaykums, as well as a few people taking photos. One group of East-Asian tourists had stopped by the side of the road. A woman stood ahead of the rest, taking a photo of me. I waved and said “ni hao.” She replied “konnichi wa.” Oops! In my defence we were just 5km from China at this point.

At last I reached the top of the pass. The guy at Pakistani customs let me go through to the pass itself and take a few photos.

I’d reached the pass at about 1.30, which was pretty much ideal. The weather forecast had said the temperature in the shade at the top of the pass would be -5°C at the hottest part of the day. I was therefore quite keen on being there when there was no shade! The sky was clear and the sun made it feel quite warm, perhaps 10°C. I put on a few extra layers and began the descent.

After the switchbacks I returned to the gently sloping valley. There was a bit of a headwind here so I wasn’t going exceptionally fast. I passed the customs checkpoints without issue (it’s so much easier when the customs officials are friendly and speak English!) and returned to Sost not long before sunset. I returned to the same hotel and checked in for another night.

I had a lie in the next day and didn’t set off until late in the morning. Some of the first vehicles I saw were trucks. Pakistani trucks are quite different to those in the rest of the world: almost all are colourfully decorated.

As I rode along the Karakorum Highway the scenery continued to be incredible. I’ll let the photos speak for themselves. 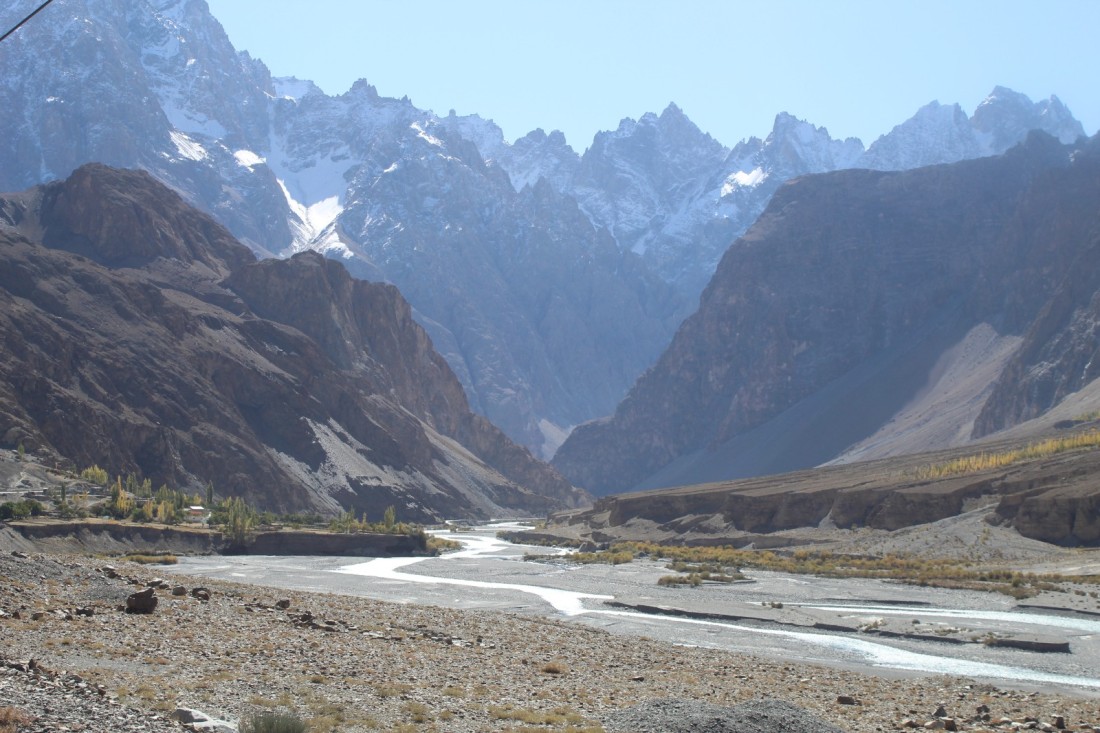 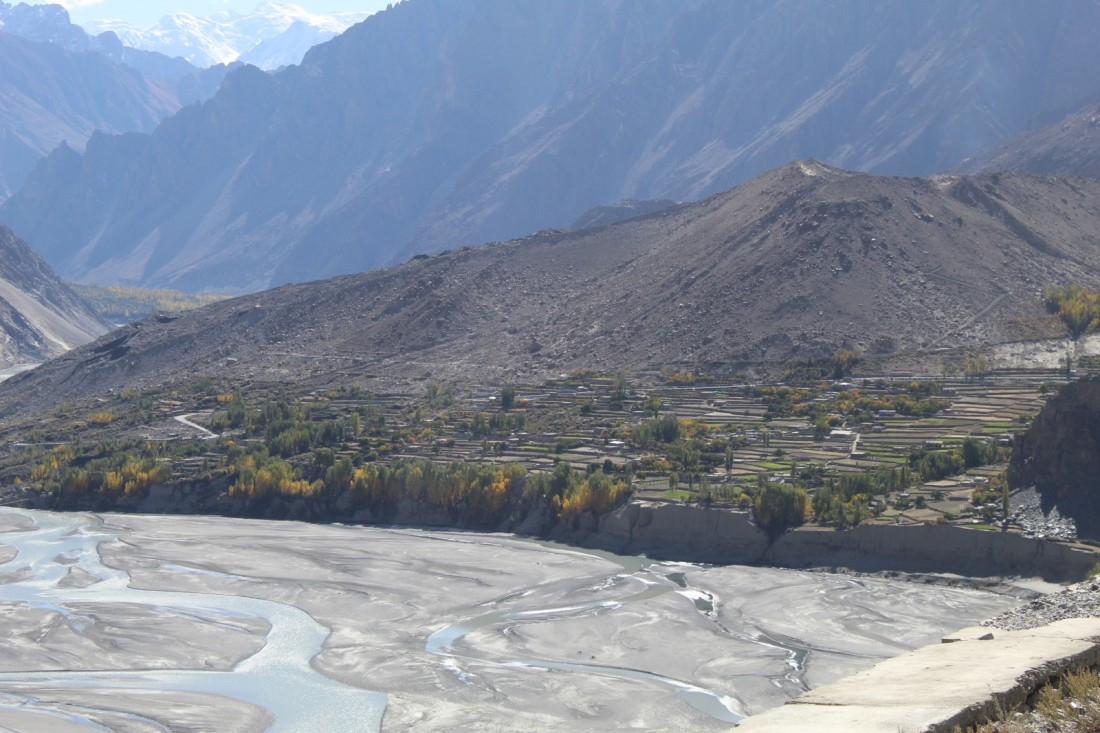 After some time I reached Lake Attabad. It is a beautiful lake with a sad history. It was formed in 2010 by a landslide that killed several people and submerged villages. 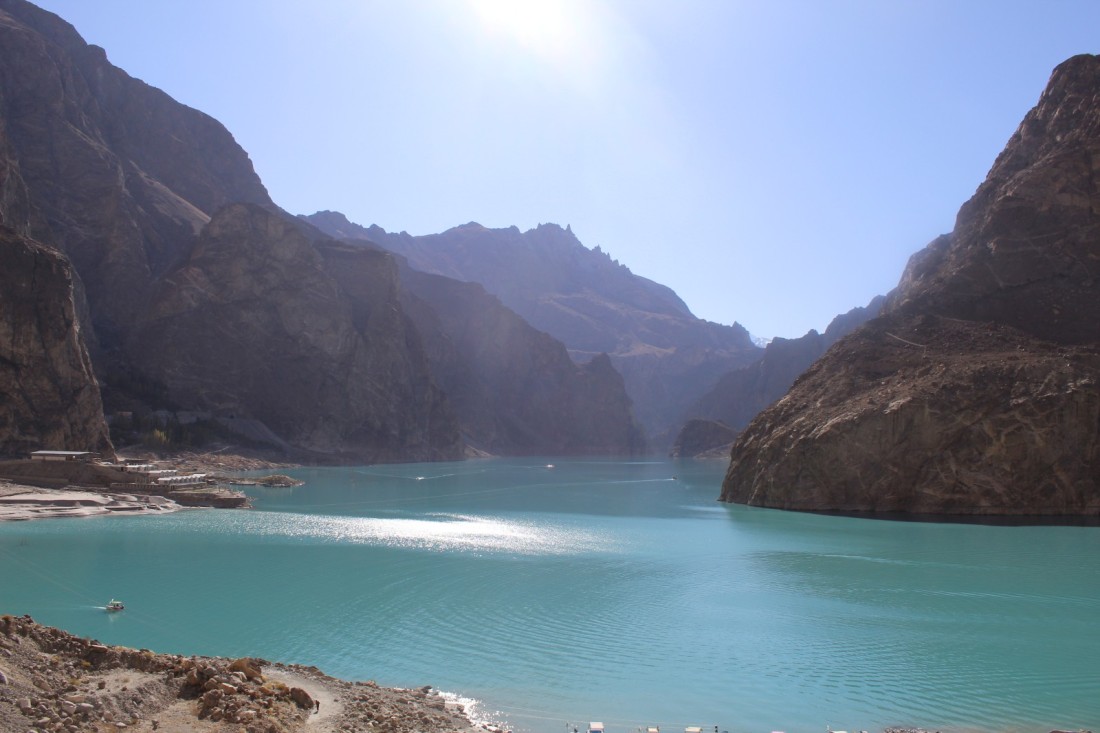 The highway had been diverted through a series of tunnels around the lake. Two of these were particularly long, at around 3km each.

I reached the town of Aliabad an hour or so before dark. I realised that both of my tyres had punctures and were going flat, so I decided to stop for the day. This section of the Karakorum Highway is a major tourist destination, and every other building seems to be a guesthouse or hotel. The first hotel quoted me a price of 1500 rupees (£7.50) which seemed very reasonable, so I stayed there.

With both tyres repaired and inflated, I set off early the next morning. The clear skies I’d become used to cycling in were replaced with dark clouds which obscured the peaks of the enormous mountains around me. 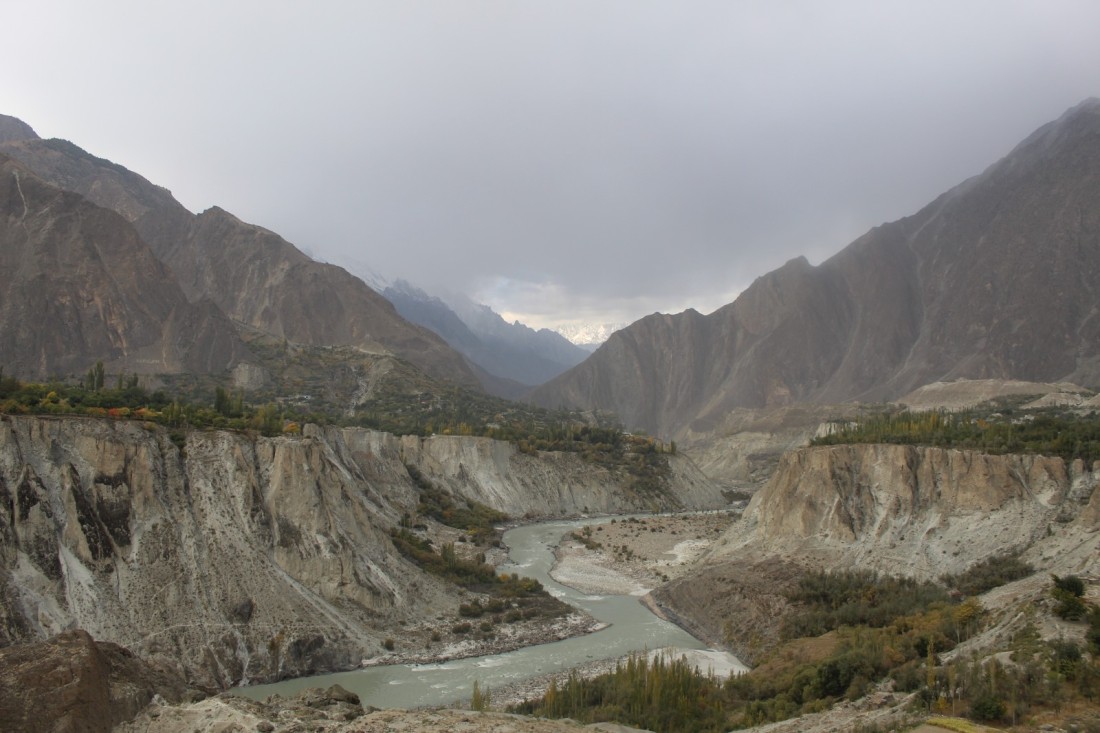 I stopped in one village and picked up some street food. Pakistan is possibly the cheapest country I’ve visited. Pakm-sized corn products soaked in honey were 5 rupees (2.5 pence), while a piece of bread filled with meat, veg and sauce was 40 rupees (£0.20).

I had only a short day planned as I wanted to stop in the town of Gilgit. I took a shortcut into the town, mostly because I wanted to cross over the long suspension footbridge. 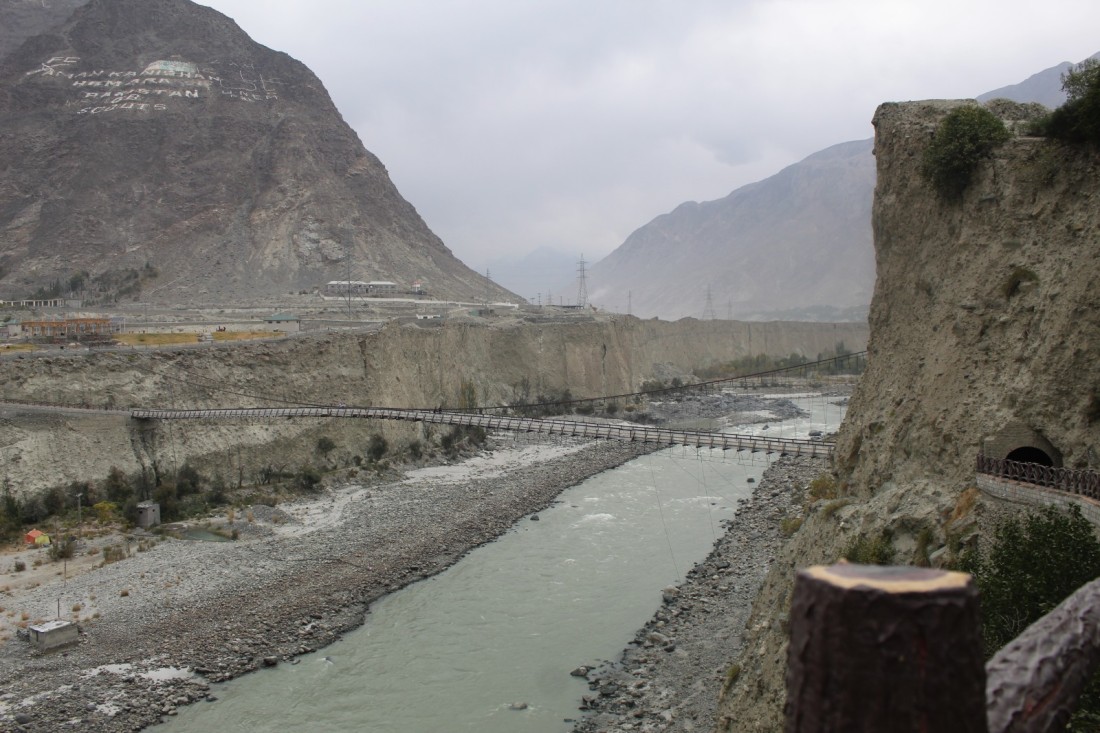 I made my way to the Madina hostel and checked in for a couple of nights – I wanted to take a rest day too. 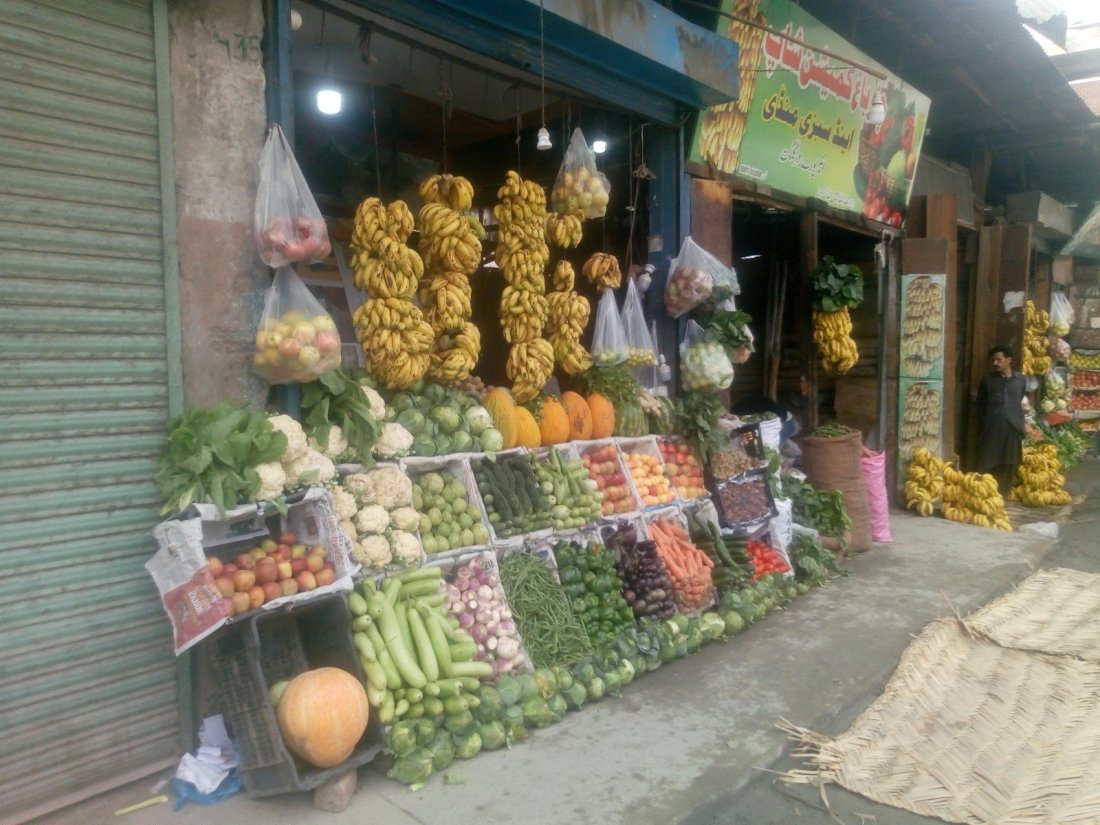