Jamie and I rode away from the border on a nice quiet road. There was very little traffic – and almost no trucks – and the people didn’t stare, but smiled and waved. Perhaps most importantly, there was no honking! Myanmar gave a good first impression.

The road was smooth and flat. It was quite narrow, but as the only other traffic was motorbikes, that didn’t matter. The bridges were a bit of a contrast to the good road, often being made of wood. 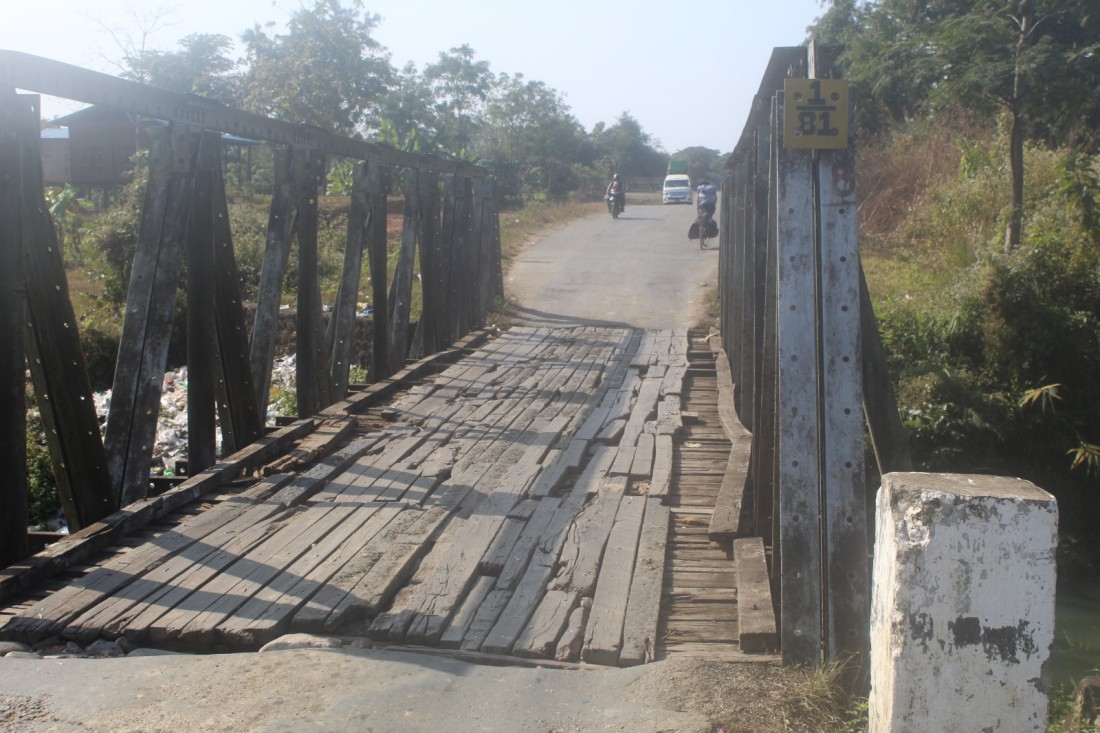 On one of these bridges I failed to avoid a gap between the planks, and my wheel got stuck, launching me off the bike – and over the side of the bridge. As I fell, I managed to grab hold of a metal beam, catching myself hanging at a 45° angle and pulling myself back up.

We met a pair of cycle tourists, Anna from the UK and Juana from Spain. We chatted for a while about sailing, as they had taken a sailboat from New Zealand to the mainland, while Jamie planned to take a sailboat from Thailand to Egypt. We’d been talking for a while when Anna asked Jamie the boat he planned on taking. It turned out to be the same boat they’d used!

Much of the land we cycled past was uncultivated, so it was easy to find a spot to camp. As the sun set, we wandered off into some woodland and set up the tents. Though we didn’t realise it at the time, we’d just crossed into the tropics!

Early the next day my plans and Jamie’s diverged. He planned to take a night boat to skip out a day or so riding, while I wanted to ride over the mountains. We said goodbye, and said we’d likely meet back up in Bagan, in a couple of days time.

Shortly after this I passed a large town, and the road became a bit busier – though nothing like India. It soon quietened down and I rode along a small, mostly flat road, often through wild, unfarmed lands. There was almost nobody around, and it made for really fun cycling. 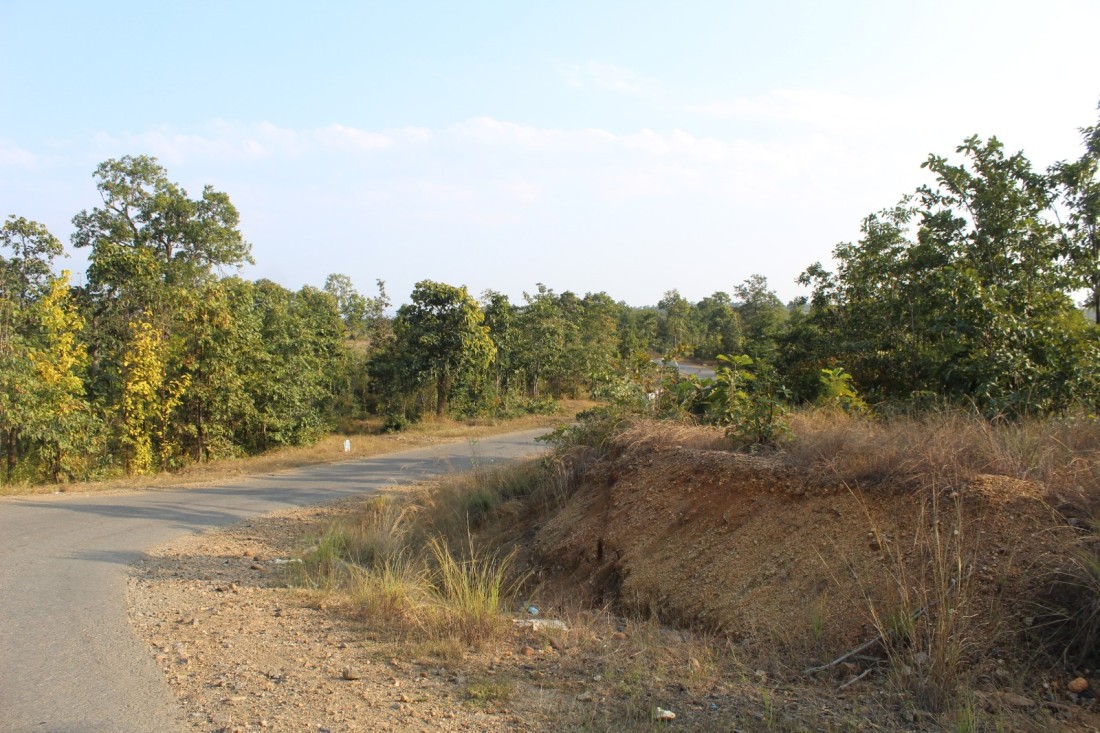 Myanmar has a bit of a reputation for being difficult to camp – officially, foreigners are required to stay in registered guest houses. It may be different in the south of the country, but I was able to camp most nights, without any problems. That night I just followed a track into some woodland, and set up the tent.

As I’ve entered the tropics it’s beginning to get hotter in the afternoons, though the nights are cool enough that camping is still comfortable. As temperature drops through the night, humidity rises, and there is often a fog in the morning. 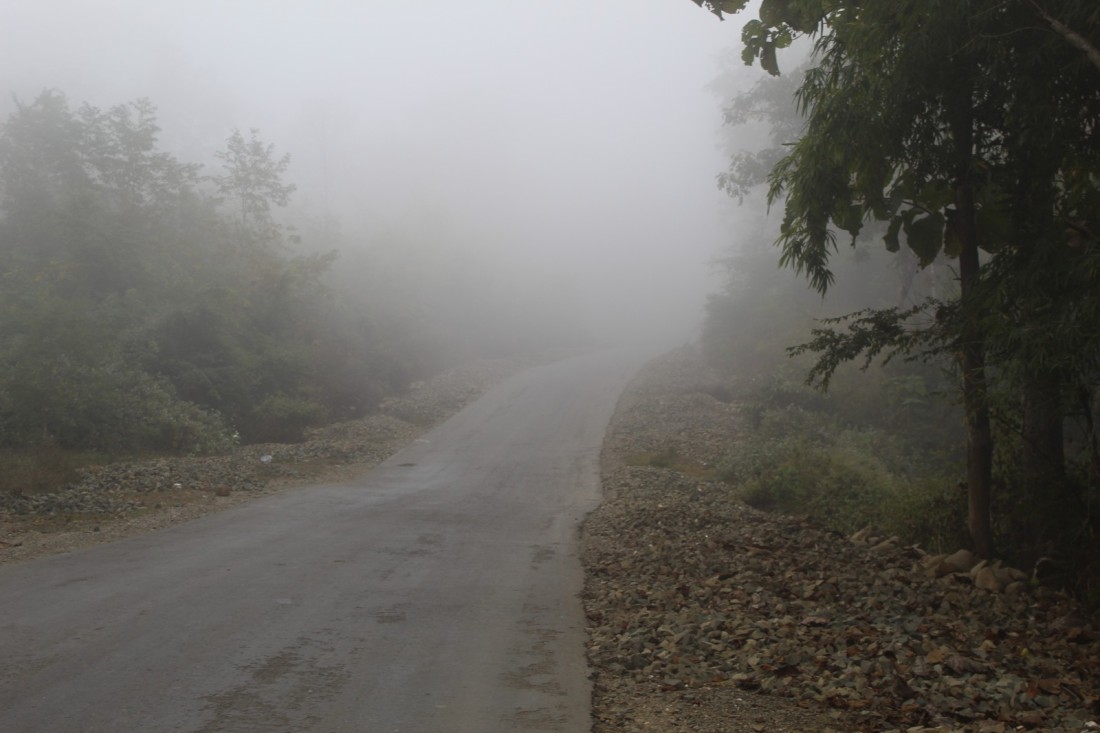 There were a fair few climbs to be getting on with, as I crossed over the mountains. The longest of these brought me up to an elevation of about 900m. More relevant, though, were the gradients – steeper than any I’d ridden for some time! They were generally over 10%, often 15%. If I was in the direct sun that was a recipe for lots of sweating! 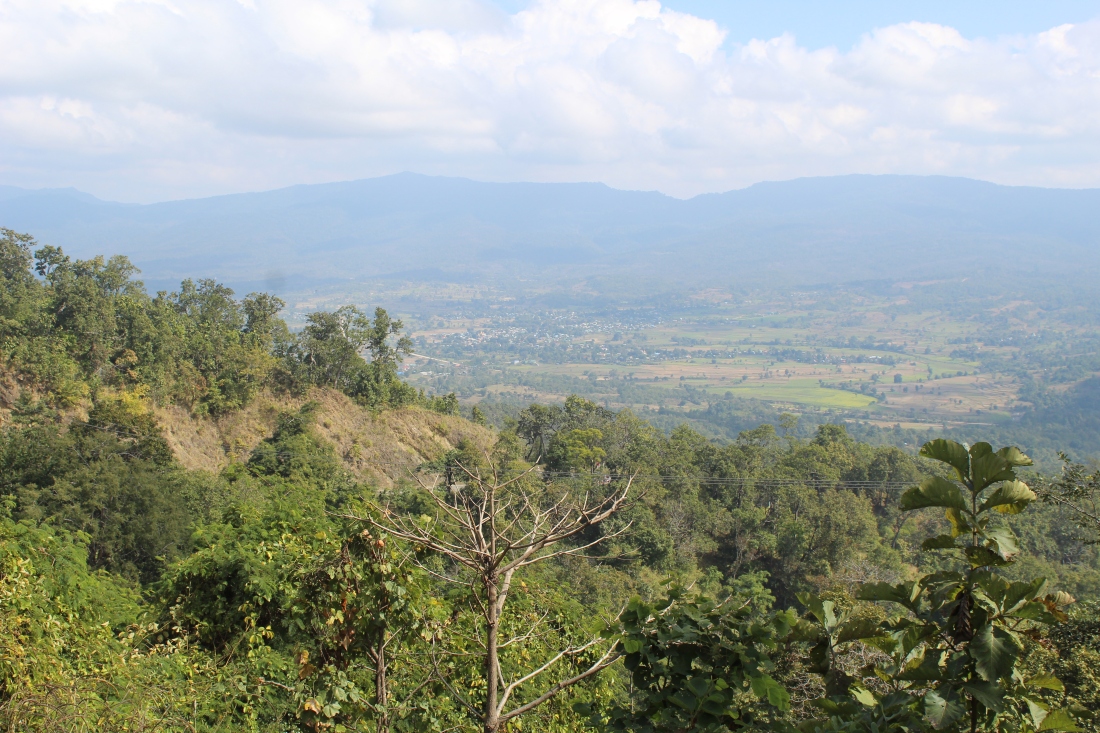 Past this climb there was a descent into a small valley, followed by another long climb back out of it. After this there was a longer descent, as I made my way down to the country’s central plains.

I planned to take a shortcut, which was shown on Google Maps as a small road. There was no sign of it on OSMAND, the map I usually use. It turned out to be a small dirt track, lasting for an hour or so. 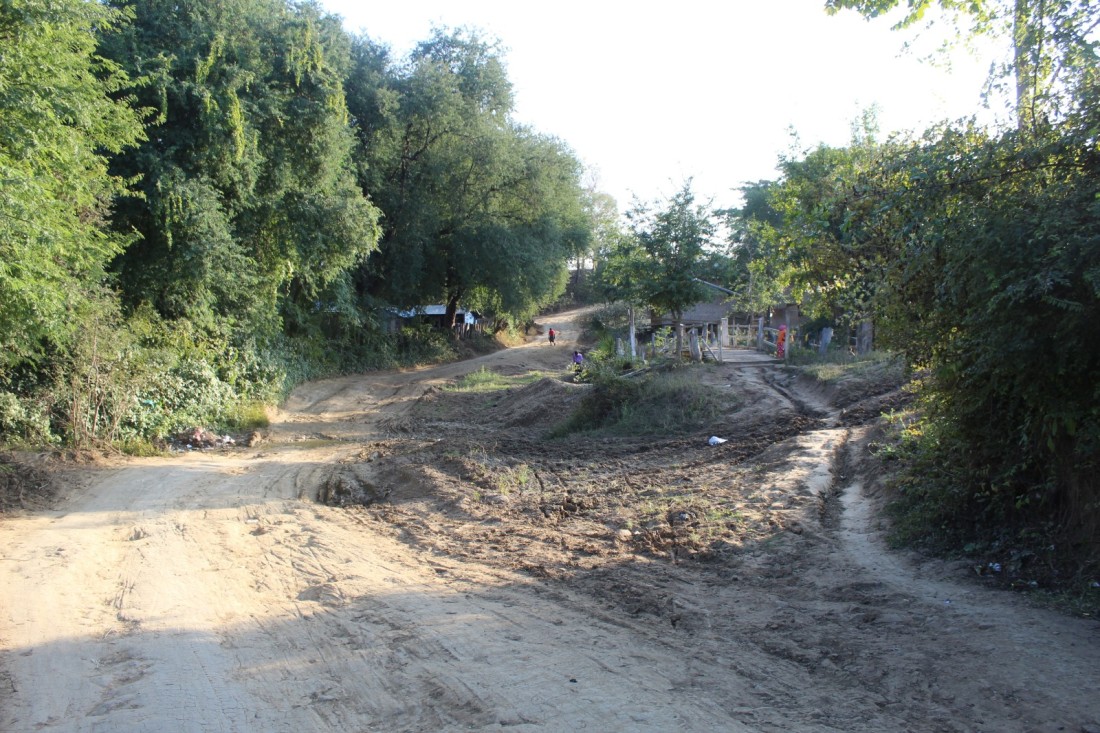 After returning to a tarmac road I continued riding until sunset, then wandered off into the forest to sleep.

From here, the land was mostly farmed, often with lines of palm trees separating the fields. It was still quite sparsely populated, though, so I enjoyed cycling along, heading very gently downhill. 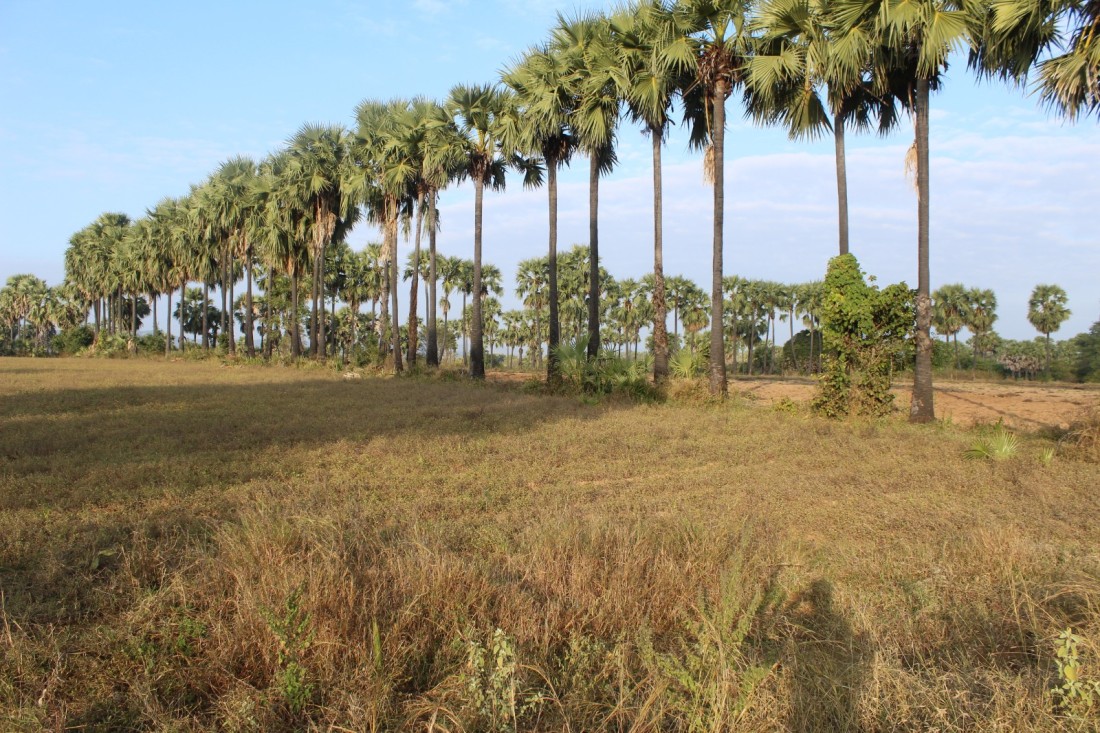 Late in the morning I reached the Irrewaddy river, Myanmar’s largest. The bridge across it was very long – much bigger than the river seemed to be. Thankfully no one had any issue with me cycling on it.

I reached the town of Nyaung-U early in the afternoon, and checked into a hotel. Jamie arrived a few hours later. Our reason for stopping here was to visit the temple complex of Bagan. Both of us were feeling a bit tired, though, so we took a rest day first.

I did manage to get a few things done on my day off, including repairing my handlebar bag. There was a building, open to the road, with a woman working away at a sewing machine. She did a good job, and put a big patch underneath all the many rips.

The next morning, I set off early – while it was still dark – and rode to a temple to see Bagan. Bagan is a massive complex with thousands of temples spread over many square kilometres. It’s no longer allowed to climb most of these. I’d heard of one which could be climbed, though, so headed over to see the sunrise.

The temple was described as having steps leading up to it. That was a bit of an exaggeration, but it was easily climbable. There were about ten other people, and we sat there quietly as we waited for the sun to rise. 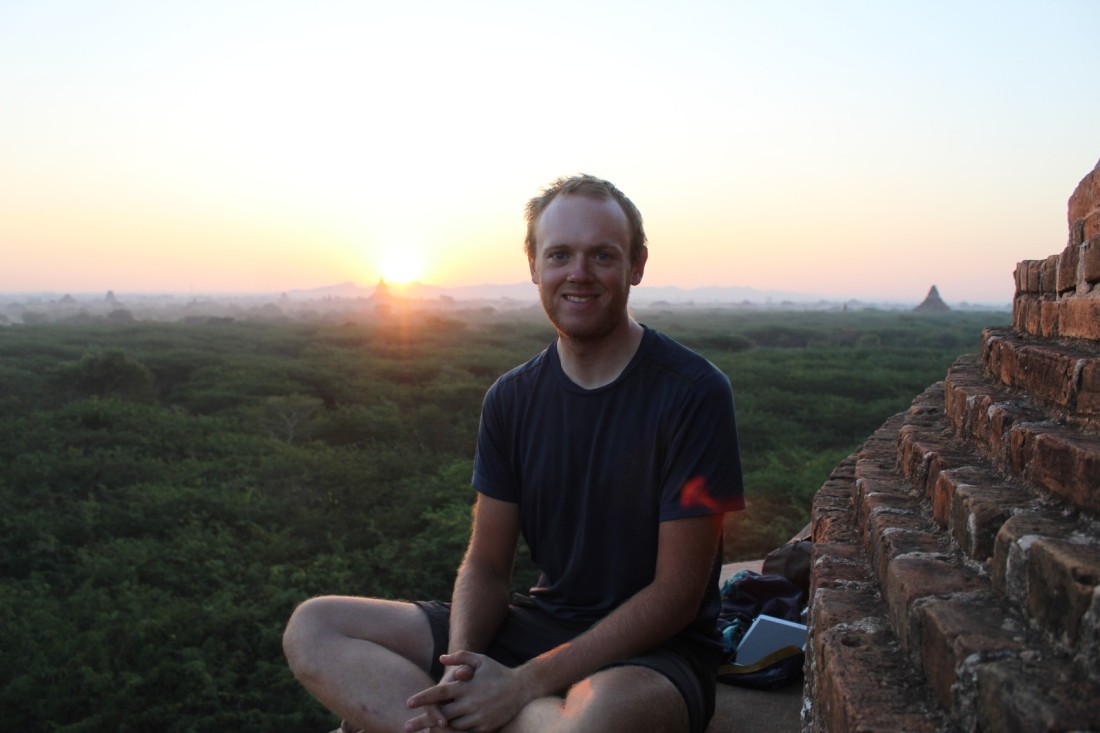 At dawn, lots of hot air balloons set up. It may be a nice way of seeing the place, but it’s also expensive, at $350 per person!

From here I spent some time riding around sandy tracks, visiting some other temples at random. 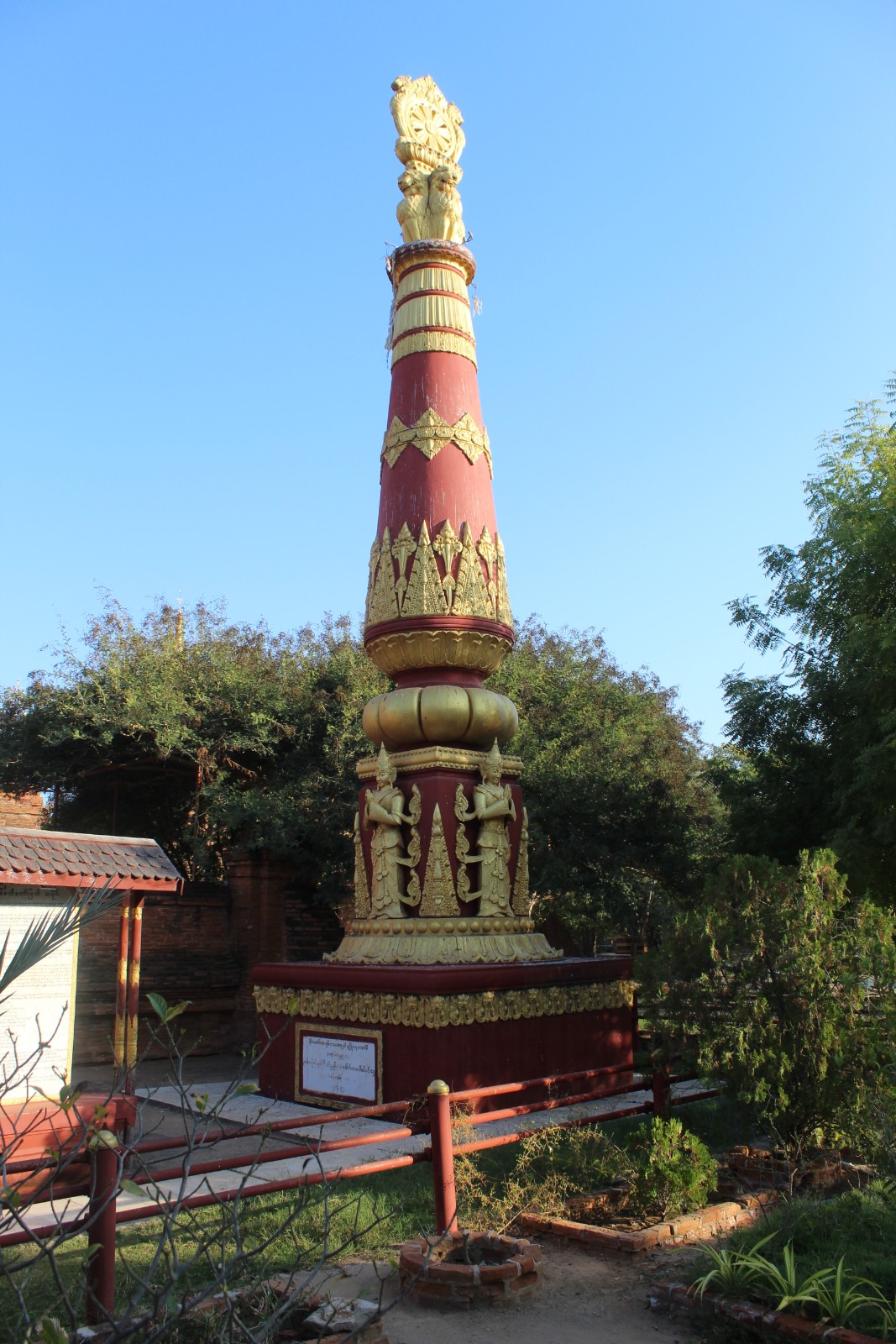 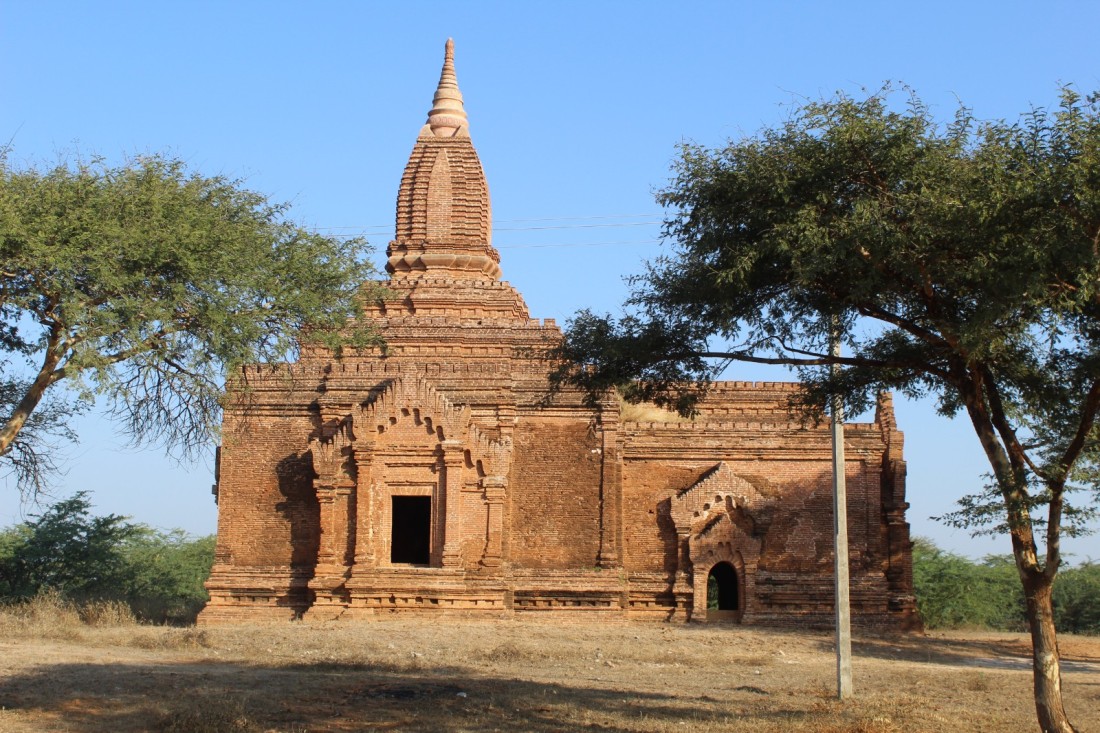 I made my way to New Bagan, and had some work done at a bike shop. I spoke to a local who told me about how they had been forced by the military to leave their homes in Old Bagan, in order to make it a more attractive place for tourists. They were moved into a snake-infested jungle without water and electricity. He credited Aung San Suu Kyi with improving their conditions since then. Judging by posters in the town, many agree.

I rode back to Nyaung-U, stopping at several more impressive temples along the way.

Note: After publishing this post, I tested publishing other posts in order to fix an issue with the comments. I did not think this would send out emails, but it did. Sorry for the spam.