I was excited to set off on the morning of the 29th as this was the day I would reach a place I’d looked forward to for a long time: Cappadocia.

After packing up camp I cycled for a few hours. The terrain continued to be flat and the kilometres flew past quickly but without great excitement. As I rode past the town of Derinkuyu two young men on a motorcycle slowed down and rode next to me for a while, chatting. Bekir and Ufur were local students and although they didn’t speak much English we were able to communicate a little. They asked what I thought of Turkey and were very pleased when I said I really liked it.

On my map there was an archaeological site marked, the underground city of Kaymakli. This sounded interesting so I stopped to check it out. There was quite a big building housing the entrance, where I went and paid the entrance fee of 35 Lira (about £4.50). I then wandered into the caves.

I was impressed at what I found. It was a surprisingly extensive site, with several different levels. Each had numerous corridors (few tall enough for me to walk through without ducking) and many rooms leading off them. These rooms in turn would have smaller holes in their walls, just big enough for one person or family to sleep. It is thought to date to the 8th-7th centuries BC and could have housed up to 3500 people. 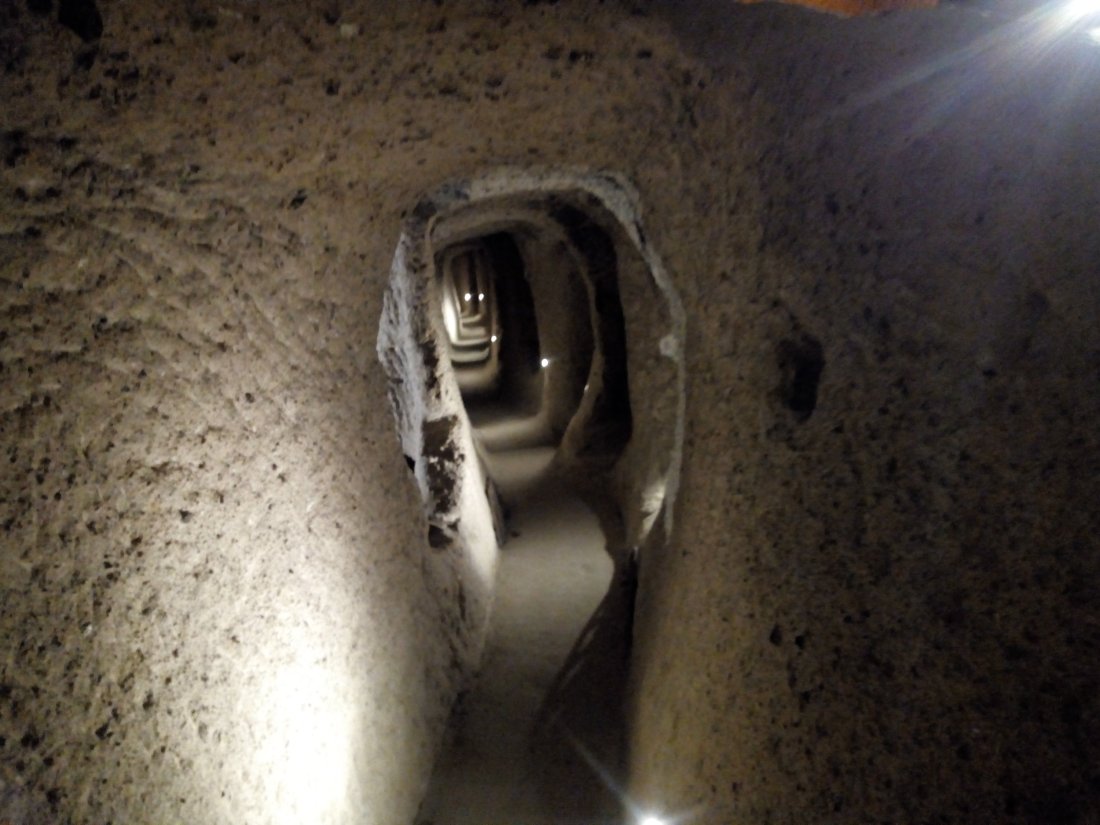 It wasn’t much further to Goreme, the hub of Cappadocian tourism and where I intended to stop for the day. 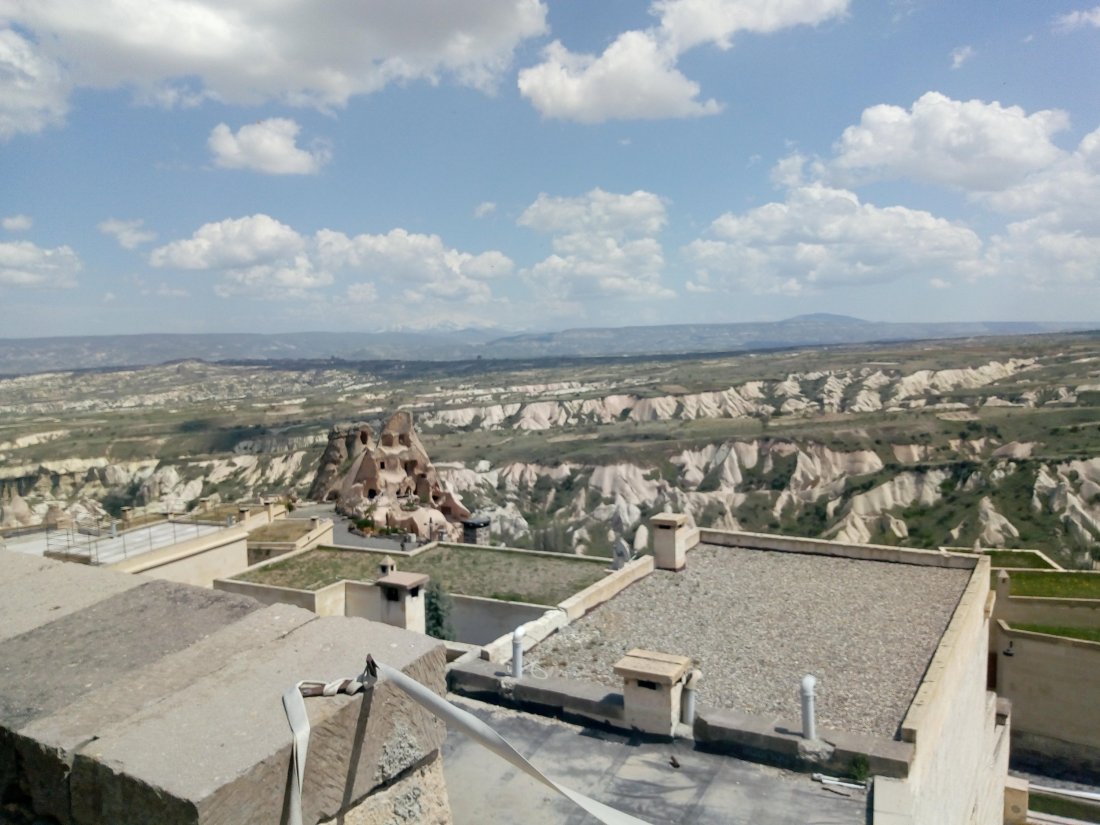 The first hostel I visited in Goreme was full, but I was able to get a bed at the second place I tried. I settled in and had a restful afternoon.

I woke up early the next morning to see the sunrise. Some mornings a large number of hot air balloons fly out over the town at this time, but due to wind they were absent this morning. 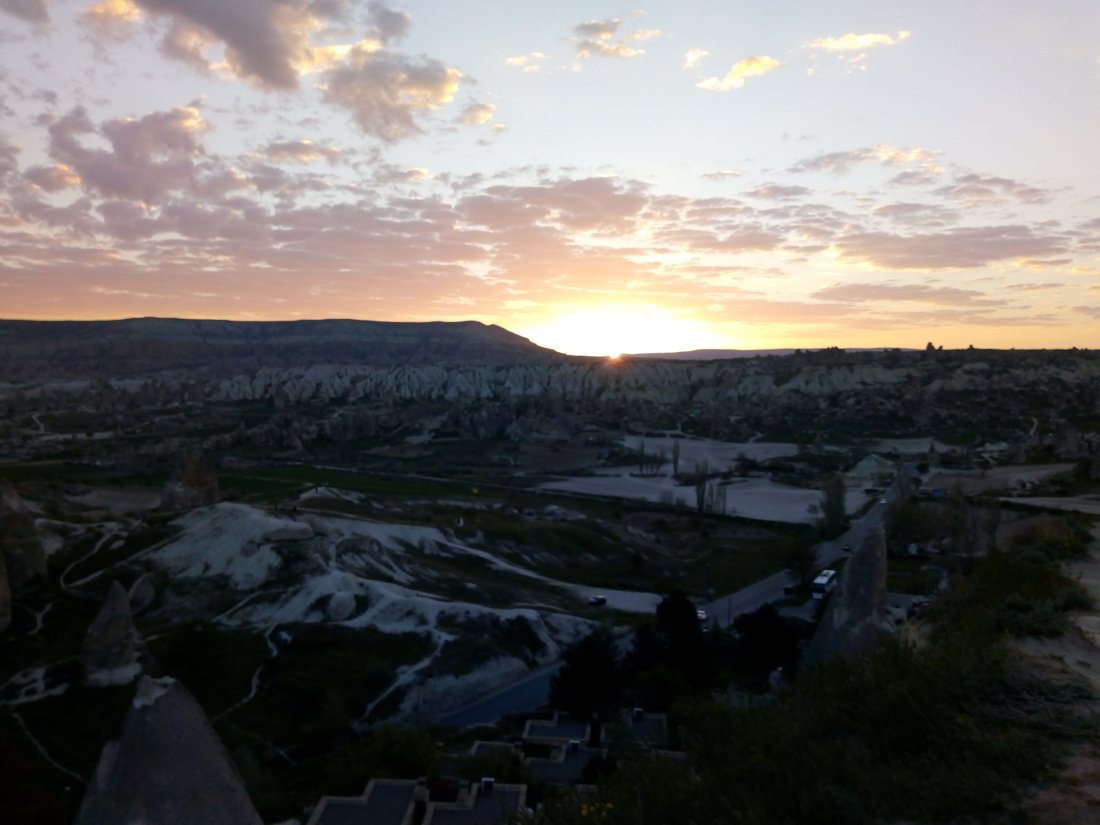 Since I was already up I decided to go for an early morning hike to avoid the crowds. Since I saw a grand total of nobody during four hours, this was either unnecessary or worked very well.I set off hiking along Zemi Valley, one of the less used trails. I passed several of the cave houses that Cappadocia is famous for, and did some exploring. 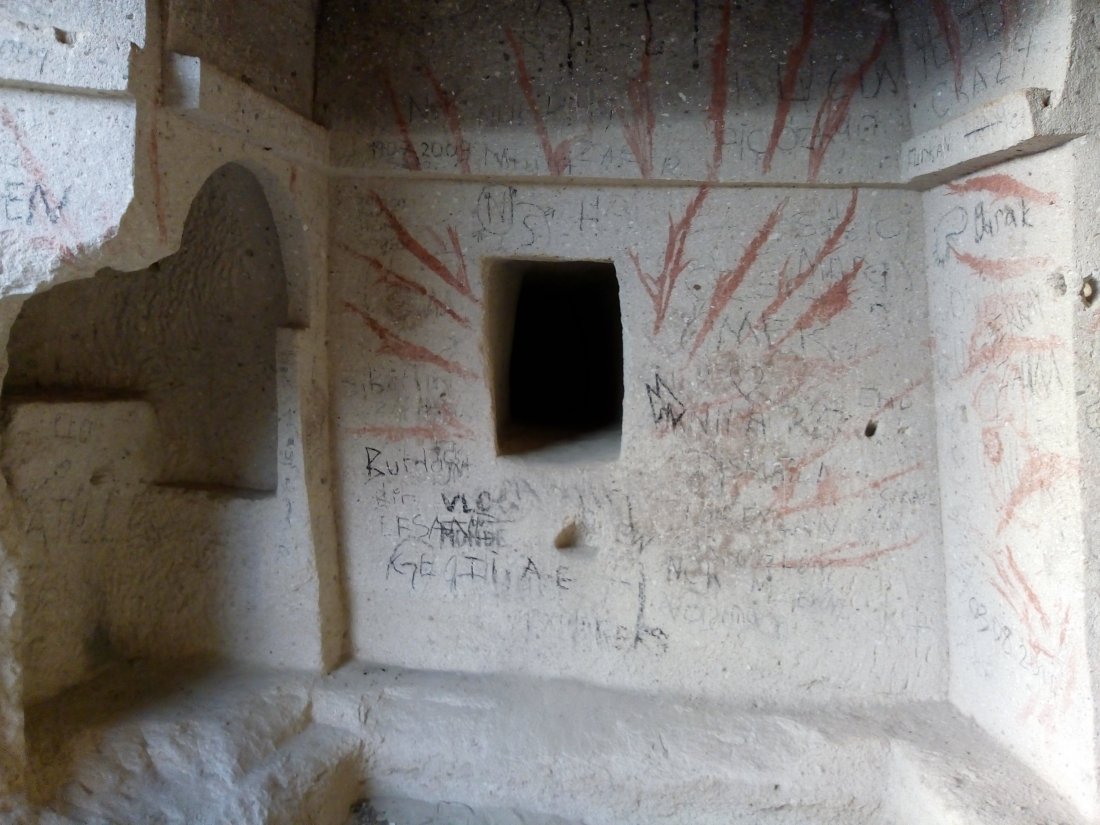 The path began almost as a road but after a while it turned into more of a trail, leading through some brush and crossing a few streams. 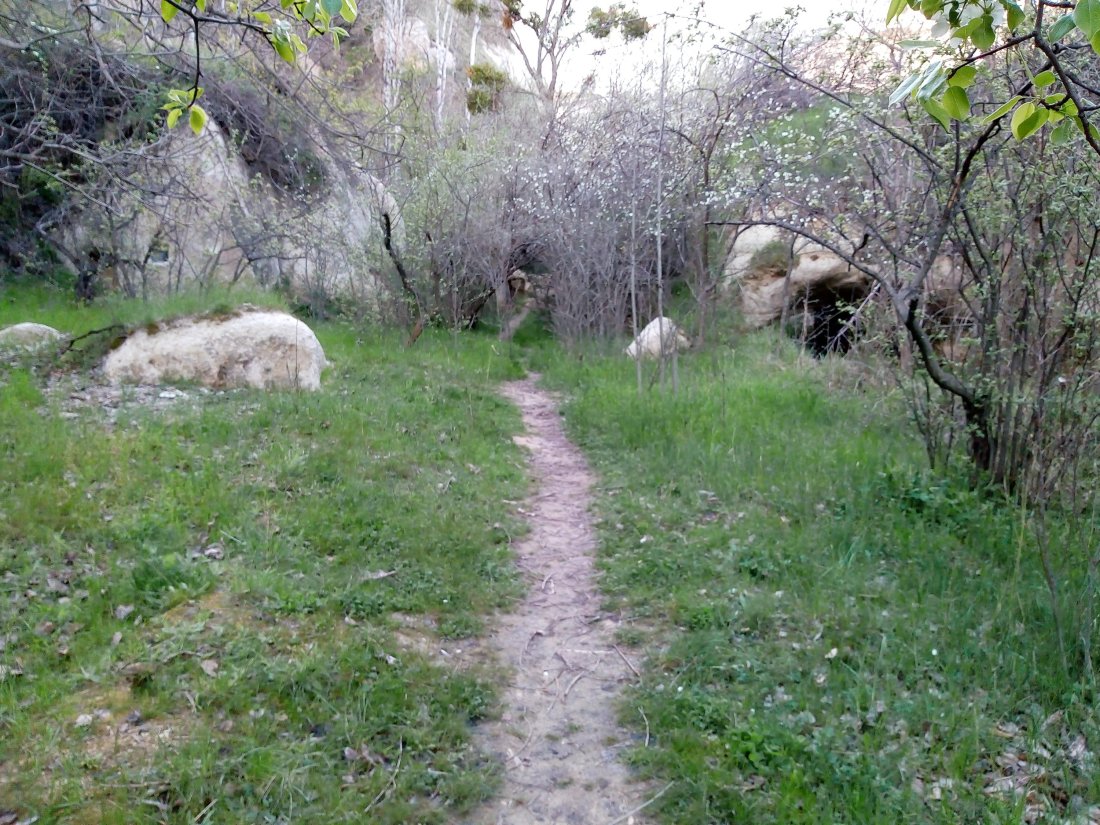 Some of the rock structures had a somewhat unusual shape!

One of the main highlights I was looking forward to on this walk was a three-story house carved out of rock. A friend sent me co-ordinates to it, and I first spotted it atop a ridge some two hundred metres above me. 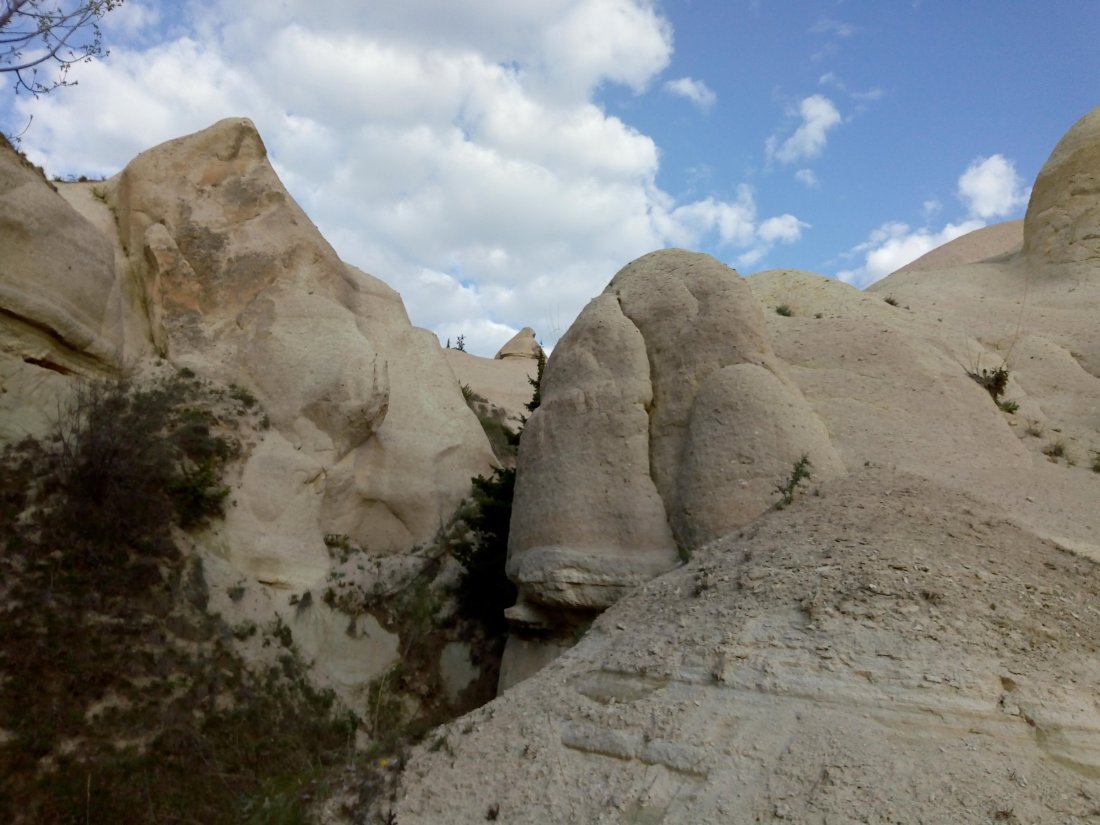 I remembered from reading the blog of another cycle tourist’s blog that it was supposed to be quite difficult to reach. I therefore spent quite a while trying to climb up these cliffs to reach it. I made quite a bit of progress before deciding that to go any further would have been more risk than I was comfortable with. I returned to the trail, hoping it would lead to an easier access route.

Immediately the trail began to climb and it was apparent this was how I was supposed get to the house. The route led up onto the ridge and I passed what had been a small chapel, with some artworks still inside.

I walked away from the trail towards the co-ordinates shown on my map. This involved a bit of scrambling up and down small valleys but was far easier than scaling the cliffs as I’d been trying before.

I entered the house, climbing through the entrance which was obscured by a small tree. 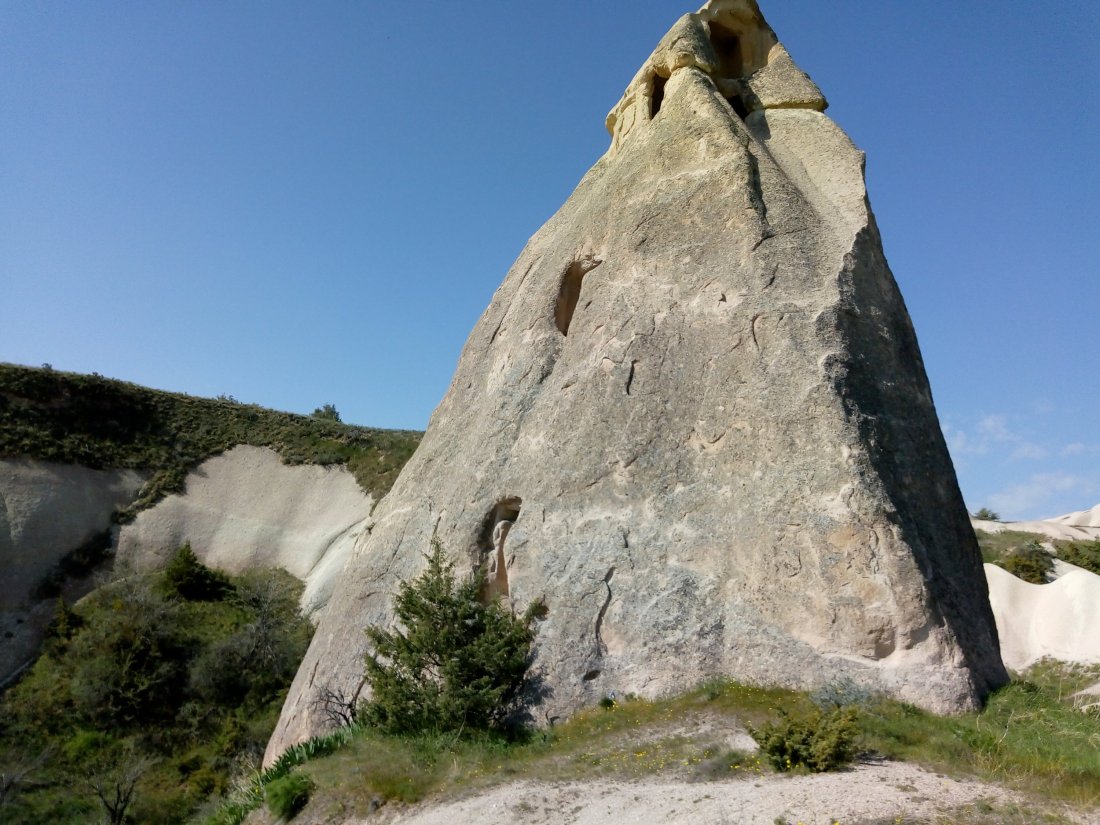 To get to the second floor, one first had to reach a ledge that was about shoulder height. After clambering onto there, it was about a 5 metre climb to the next level. This climb took place in a circular shaft of about 1 metre diameter, with foot/hand/elbow holes. I was a bit nervous climbing up there but safely made my way up.

Getting to the third floor involved a similar climb, but here the handholds had been far more exposed to the elements and were very well worn. I decided they weren’t worth the risk. 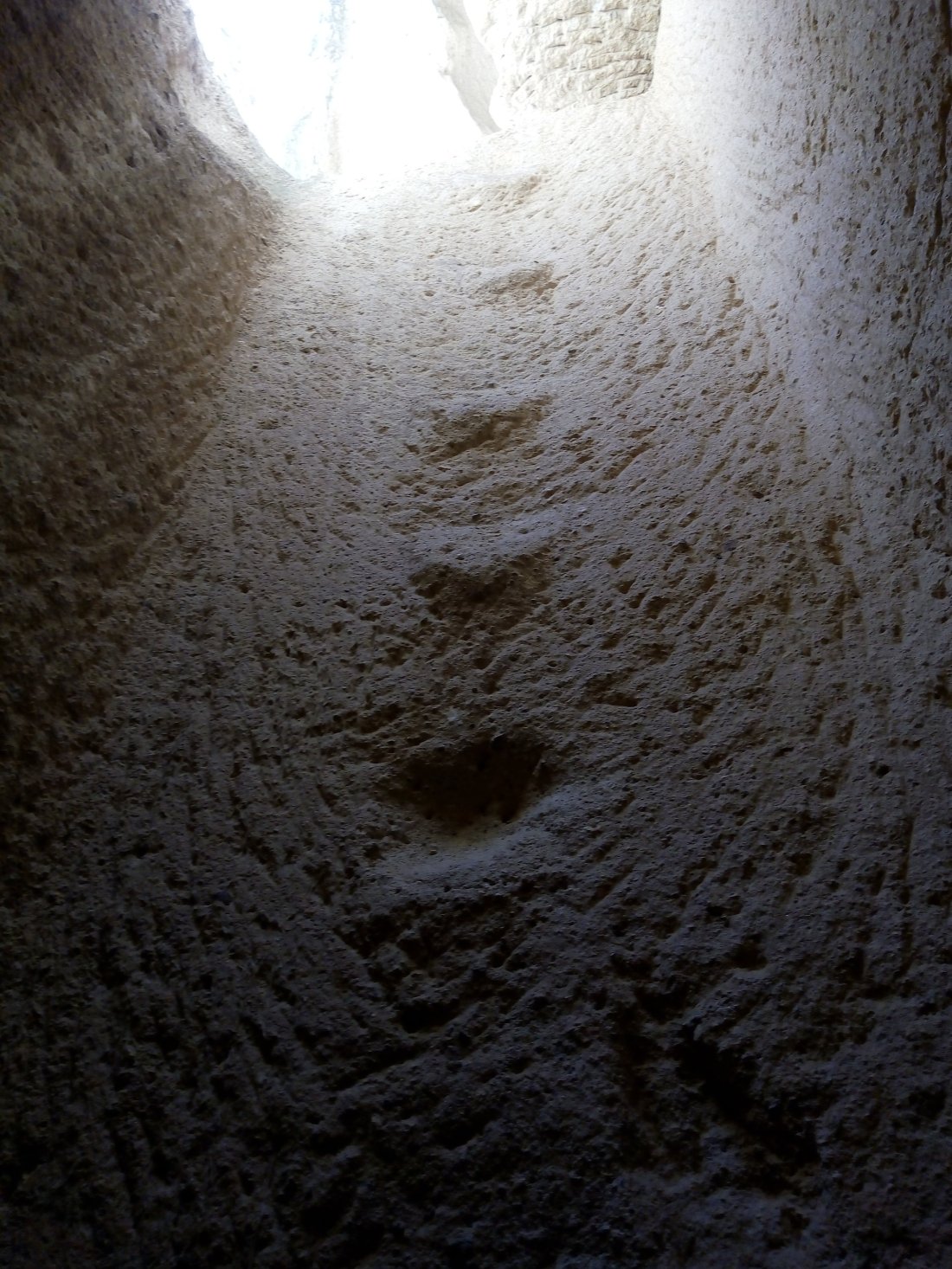 This cave house was very impressive and I had enjoyed the hike to get there. I was by then ready to return and so I walked back to Goreme. I spent the rest of the day getting various tasks sorted back at the hostel.

I made a fairly early start the next morning, setting off on a dirt track that led me to an overlook for the so-called “Love Valley.” The valley gets its name from the shape of the rock structures. Officially they are said to be in the shape of “fairy chimneys.”

From here I joined the main road and set off cycling generally eastwards. I discovered that my water bladder had sprung a leak, and went to repair it. It was at this point I discovered that the puncture repair kit I’d bought was in fact a patch kit, and only had patches – no glue. I moved some things around, putting the water in my handlebar accessory bag so it wouldn’t leak on to anything important. Well, I thought, at least I didn’t discover my lack of glue when I had a punctured tyre.

A couple hours later a loud hissing sound came from my rear tyre. My tyre was punctured. I pushed the bike a few metres back to a bus stop I’d just passed, seeing several shards of glass that had presumably caused the leak. The glass had removed itself from the tyre and I put in a spare inner tube before continuing on.

I struggled to find somewhere to camp in the evening. As the sun set I approached a town and decided to see if I could find a hotel there. There was a petrol station and I decided I’d ask them for directions. As I got nearer it turned out the petrol station was also a hotel and, at a price of 40 lira (£5) it was an easy decision to stay there.