After a long lie-in, I finally left my fan-cooled hotel. By now it was late in the morning, and hot and humid – enough to have me sweating while packing up the bike. I rode through the town of Nong Khai, heading towards the bridge over the Mekong – heading to Laos. 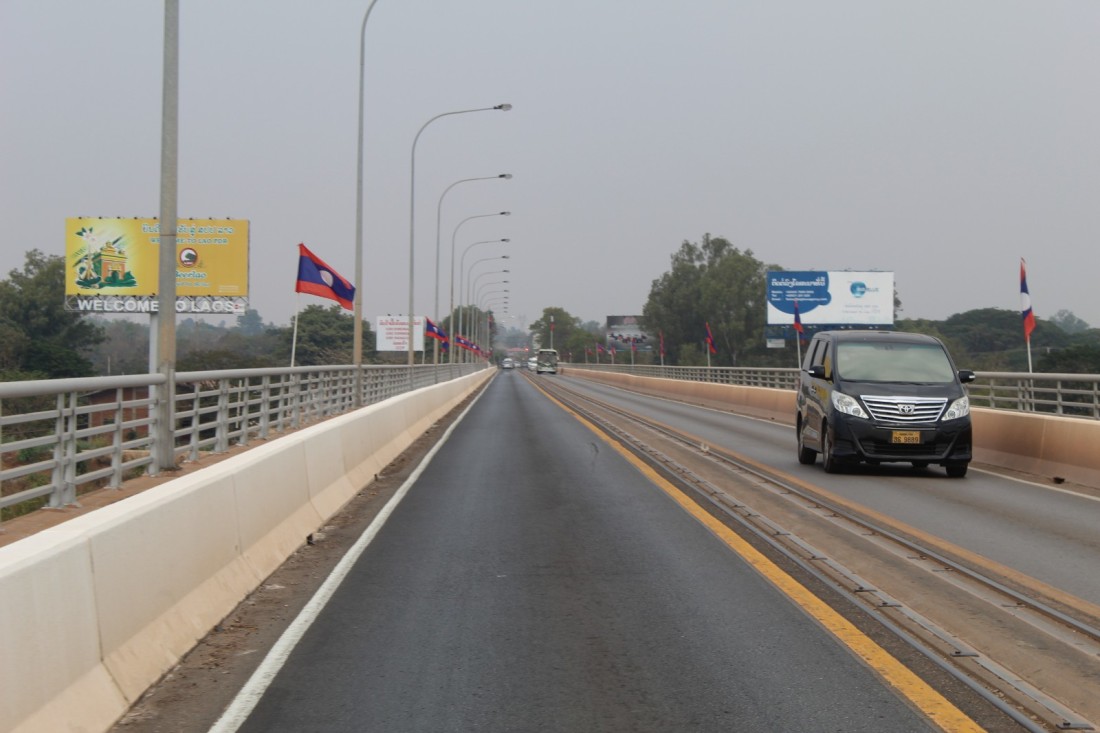 I exchanged some of my Thai Baht into Lao Kip at the border. The exchange rate wasn’t great, but since I was only exchanging a small amount it worked out better than paying the high flat rate at an ATM. I then went to Thai immigration, got stamped out, and rode across the bridge. There was a no cycling sign on the bridge, but it takes more than that to stop me!

Lao immigration involved filling in three forms, the same information on each. I also had to pay a $36 visa fee. The woman at the counter rejected most of my bills, but accepted my pristine $100 bill – thankfully, they had change. I then received my visa and entry stamp, and cycled away – now on the right-hand side of the road.

After a few kilometres I reached Buddha Park. This is a site with a great many Buddha statues, in an amazingly wide variety of shapes, sizes and poses. I’d heard it was worth checking out, and have to agree. 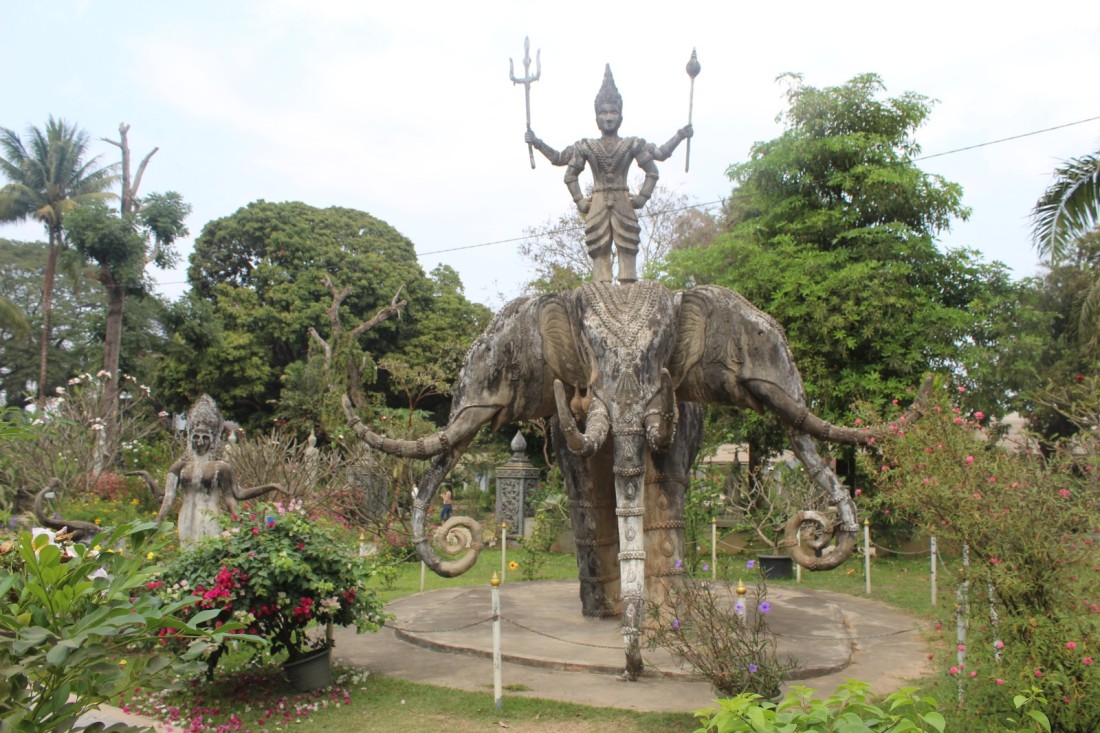 The road from here was very good, and with remarkably little traffic. I soon found out why, as the tarmac ended abruptly and it became a dirt road. 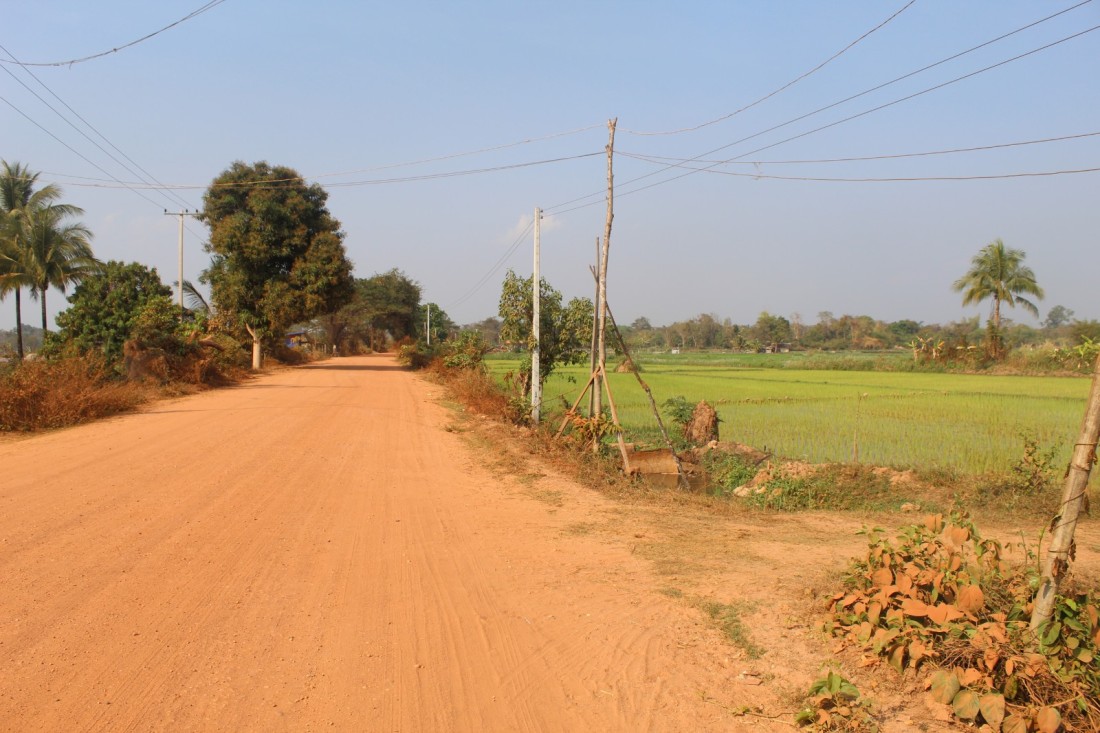 It was pretty good as dirt roads go, and I rolled along quickly, reaching another tarmac road after a few kilometres. Though perfectly adequate, this road wasn’t up to Thai standards – in particular, it lacked a hard shoulder. After a few days in Thailand, where I had that hard shoulder to keep me away from traffic, it took a while to get used to all the oncoming overtakes. The driving wasn’t too bad though, as it goes.

In the evening I stopped at a guesthouse – a reasonably large hotel, really, with perhaps 20 rooms, but they tend to be called guesthouses here. It’s getting hot enough that evenings in the tent are uncomfortable, and I’d heard that accomodation was quite cheap in Laos. Indeed, the first place I checked was 70,000 Kip (£6) for a spacious room with a fan. I checked in there.

The next day was mostly flat riding, as I cycled parallel to the Mekong River. Lao children get very excited when they see a cycle tourist, and almost all seem to yell out “Hello,” “Bye bye,” or “Sabaidee” – Lao for hello. Other than these interactions, there’s not much to say – I was mostly cycling besides rice paddies, as usual for the area.

In the afternoon I met another cycle tourist, Bart from the Netherlands. We chatted for a bit and he said he’d originally planned to go to Vietnam, but found the E-Visa system down for the next ten days, due to Chinese New Year. I said that I thought one could go to Vietnam for 15 days without a visa, but he didn’t think so.

That had me a bit worried, because I didn’t have a visa for Vietnam. I stopped at the next cafe I saw and asked if they had WiFi. The woman working there let me use her phone’s hotspot, and I was able to confirm that I didn’t need a Vietnamese visa, which was a relief. The people there insisted I have a free glass of beer before leaving.

In the evening, flat ground gave way to some low hills, which provided a welcome windbreak – most of the day had been spent riding into a headwind.

The headwind persisted the next day. Combined with an overcast sky, the temperature was pleasantly cool, a welcome change especially since I had a few hills to climb as I made my way toward the Vietnamese border.

The people here seemed even more excited to see me than usual for Laos. In one village, lots of people wanted high fives – even the teenagers smoking on their motorcycles. In the next village, a group of young women screamed excitedly and waved as I rode past. If you want to feel like a celebrity, cycling through Laos would be the way to do so.

As I climbed up to the border, the weather got colder. It then started to rain, and I climbed all the way up to the clouds – though that was only an elevation of 700m or so. By the time I got to customs, I could barely see. 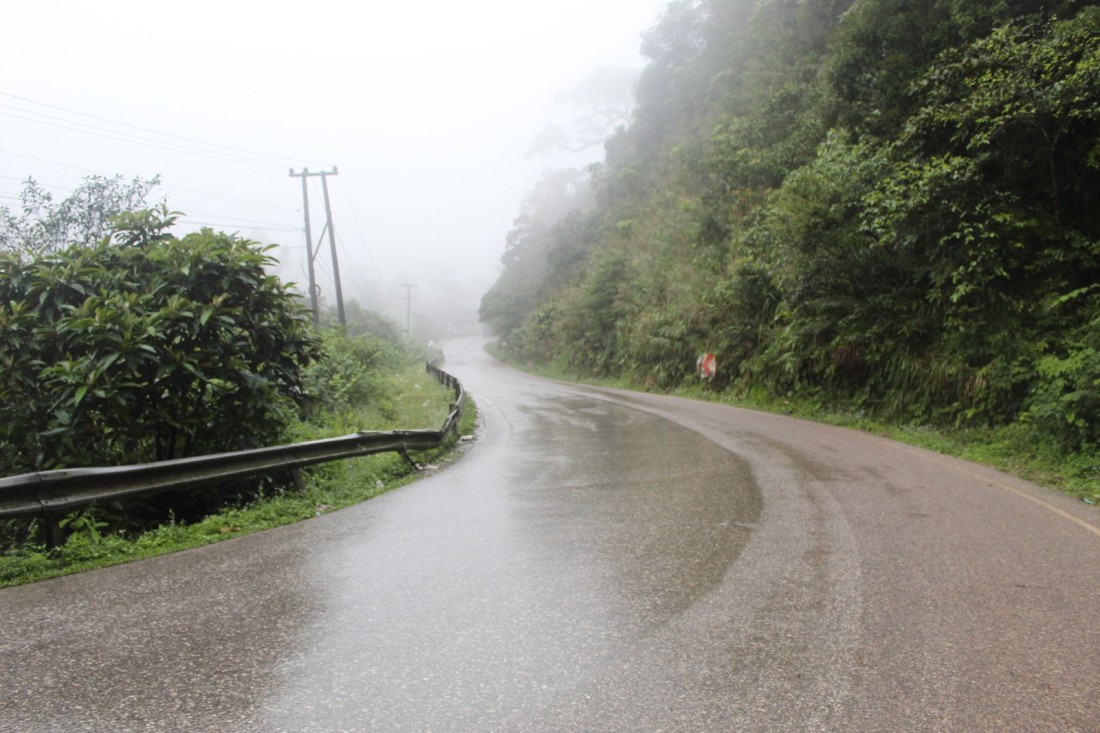 Thankfully, the research I’d done proved correct and as a UK citizen I was able to cross into Vietnam without needing a visa. However the money exchange place closed just as I arrived, so I had to continue into Vietnam with no Dong. The Vietnamese currency, the Dong, is the least valuable I’ve used so far, with 30,000 Dong being worth £1.

The steep descent from the border, combined with clouds and rain, meant I was feeling colder than I had for some time. I even had to put my rain jacket on! It warmed up as I moved out of the clouds, and I could see a river and forest around me. The scenery was very different to lowland Laos, which had been more intensely farmed. 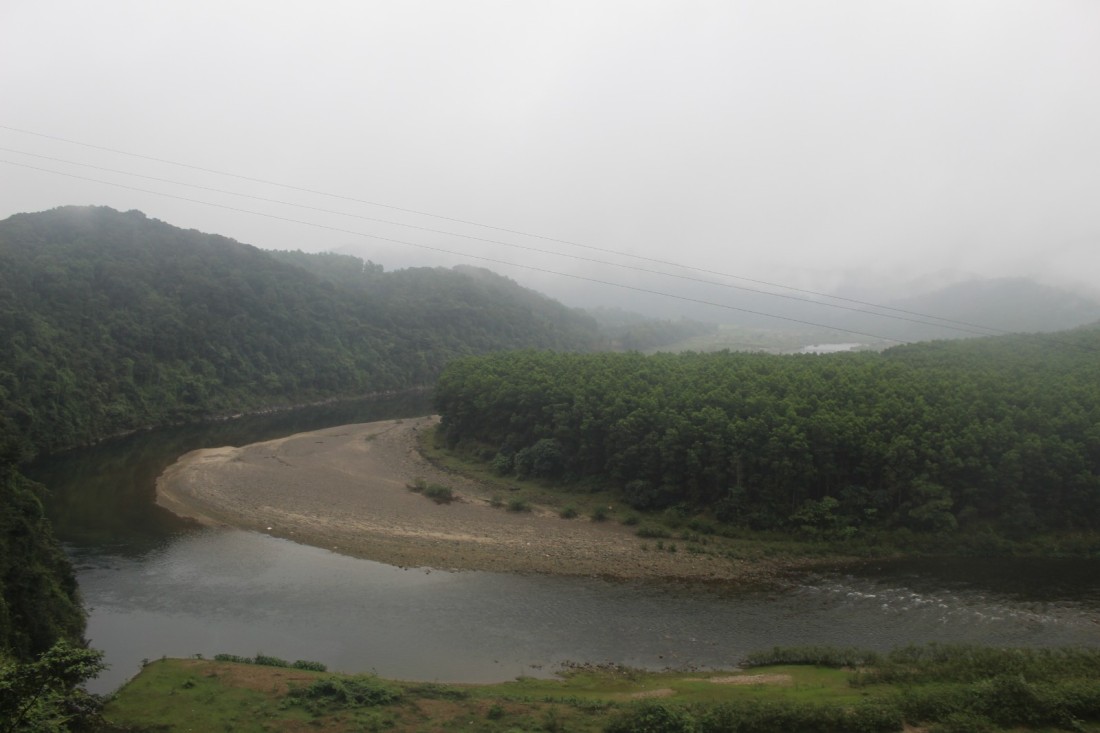 After I passed the first village, there was a remarkable amount of traffic – mostly motorcycles, with the whole family on board, heading back to the village. It was Chinese New Year, and I guess they’d been celebrating in the nearby town.

When I reached that town there were still lots of celebrations going on, with many busy karaoke bars. I worried it would be difficult to find a hotel but this wasn’t the case, and after visiting ATM I checked into the first place I asked, for 200,000 dong (£6).