I said goodbye to Jamie and set off cycling, gradually climbing on a pleasantly quiet road. On my left I could see Mt Popa, an extinct volcano that is a popular pilgrimage site for many Burmese. 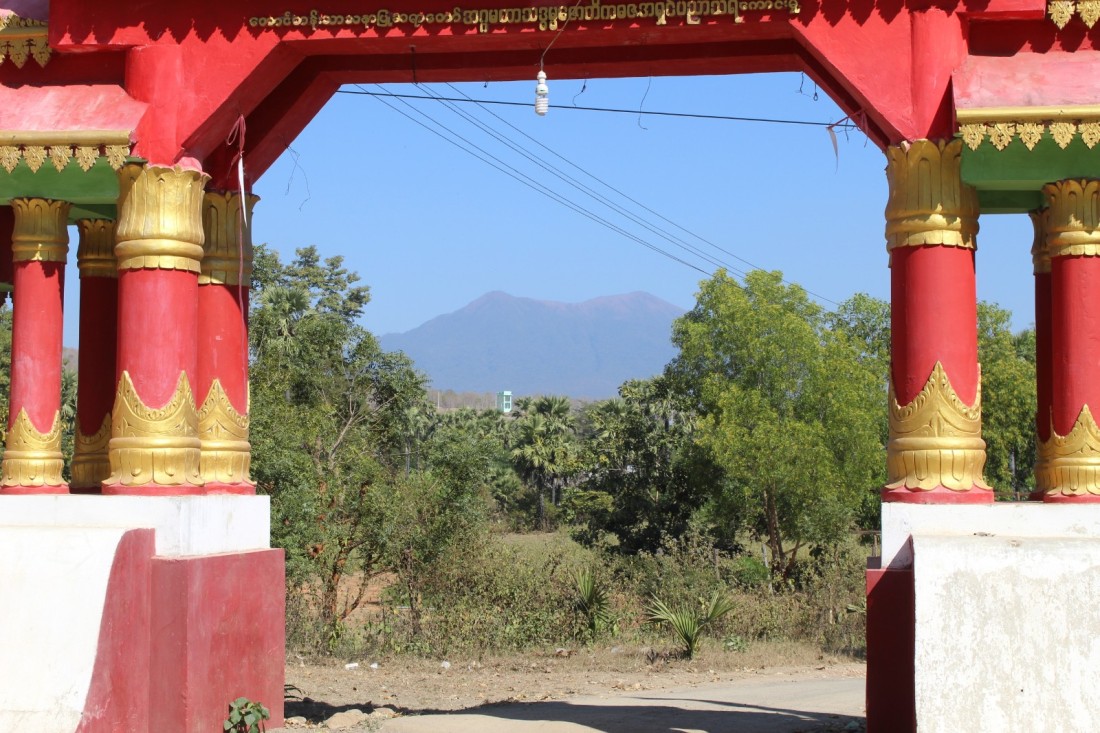 In the afternoon I turned off the low-traffic main road onto even emptier side roads. I really enjoyed cycling along, with just myself for company. It still feels strange, after India and Bangladesh, to have so few people around – but in a good way. 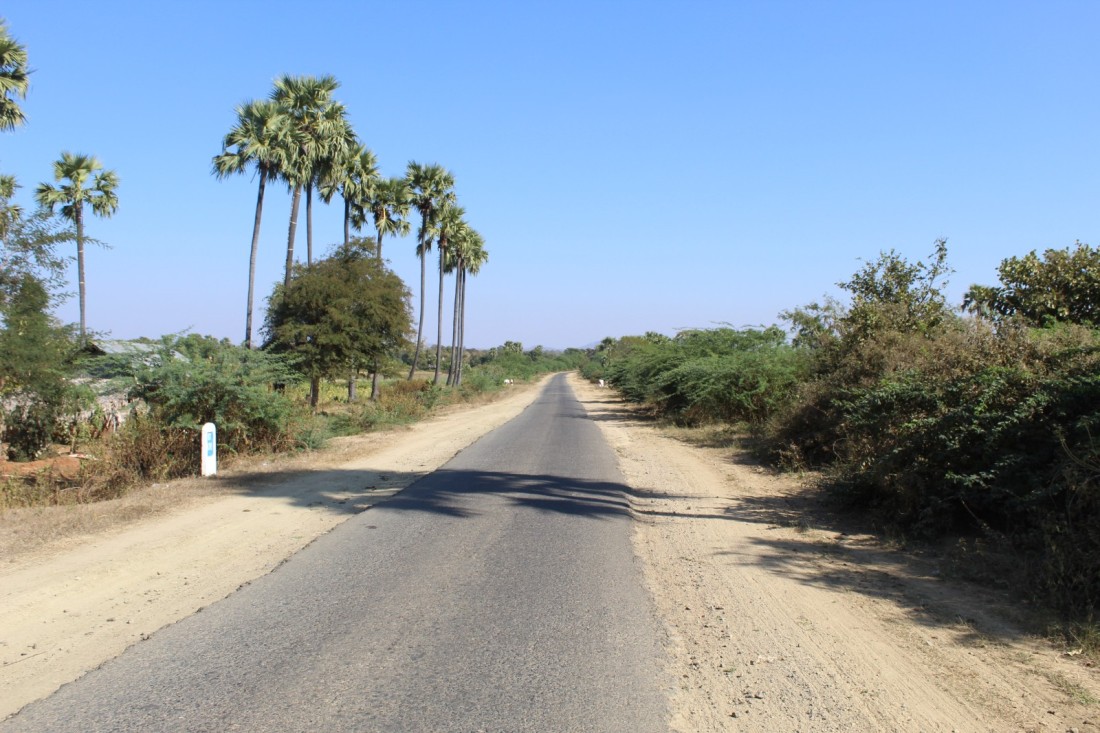 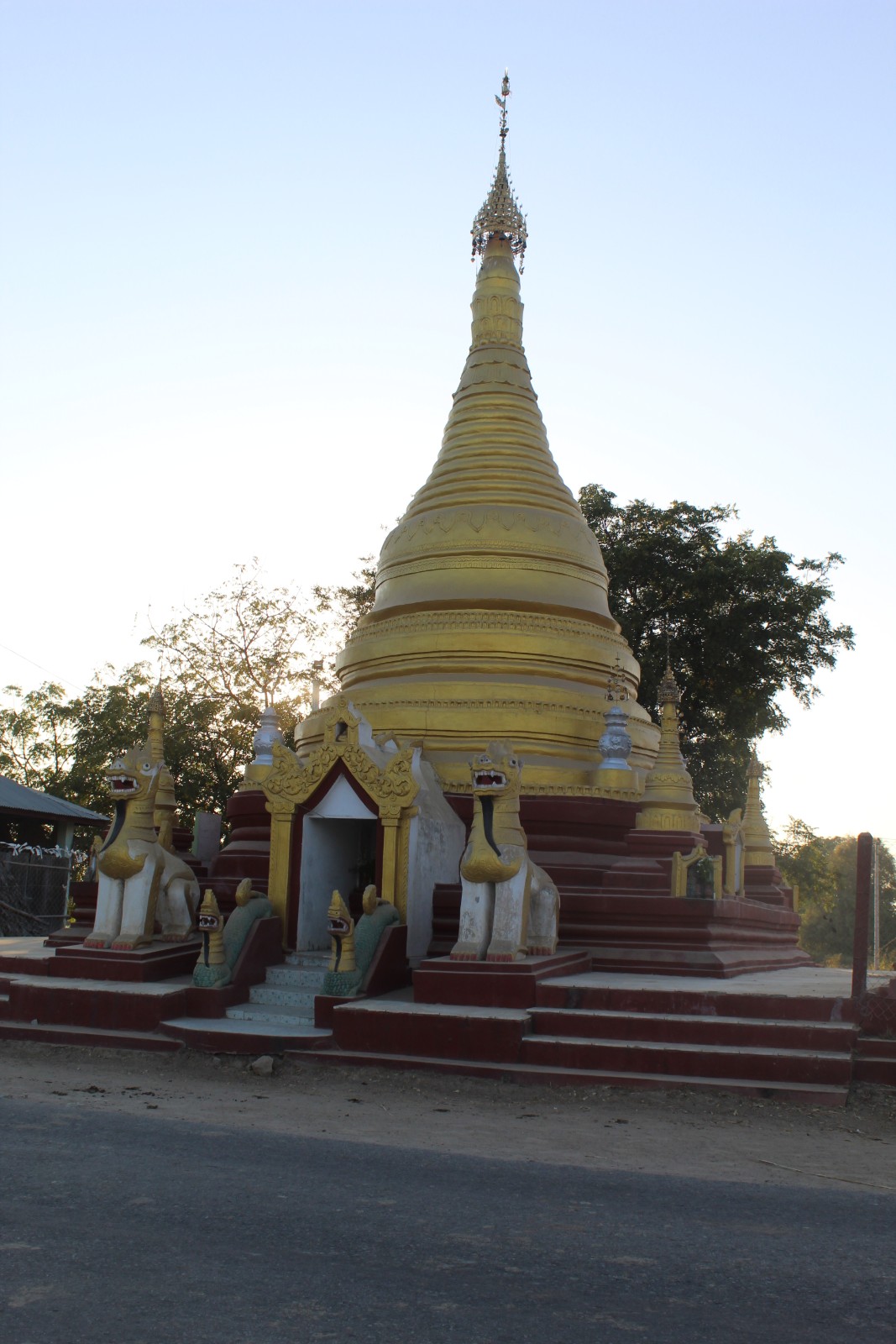 In the evening I wandered away from the road and found a place to sleep. There were no insects around so I didn’t bother with the tent, instead simply sleeping on the ground behind a tree. 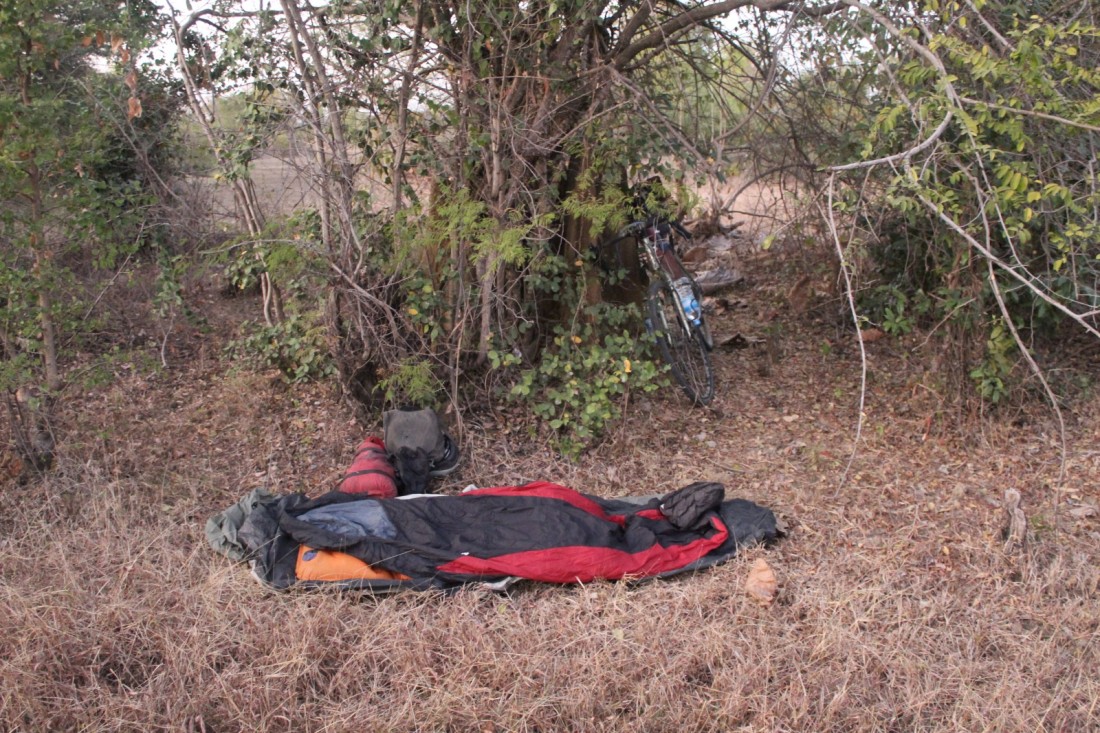 There was an almost full moon so it was quite bright and I was able to get packed up before sunrise, and start riding as soon as the sun came up. 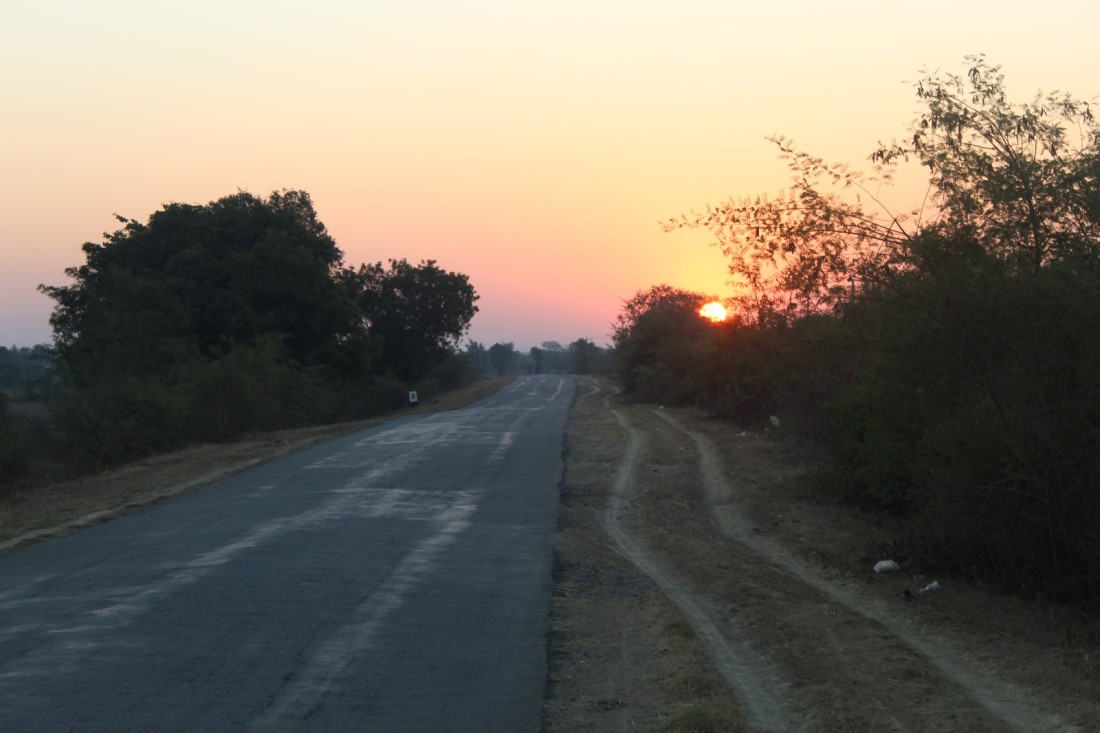 There were a few hills to climb in the morning, though none of them very high. There were still very few people around, and I was surrounded mostly by forest. 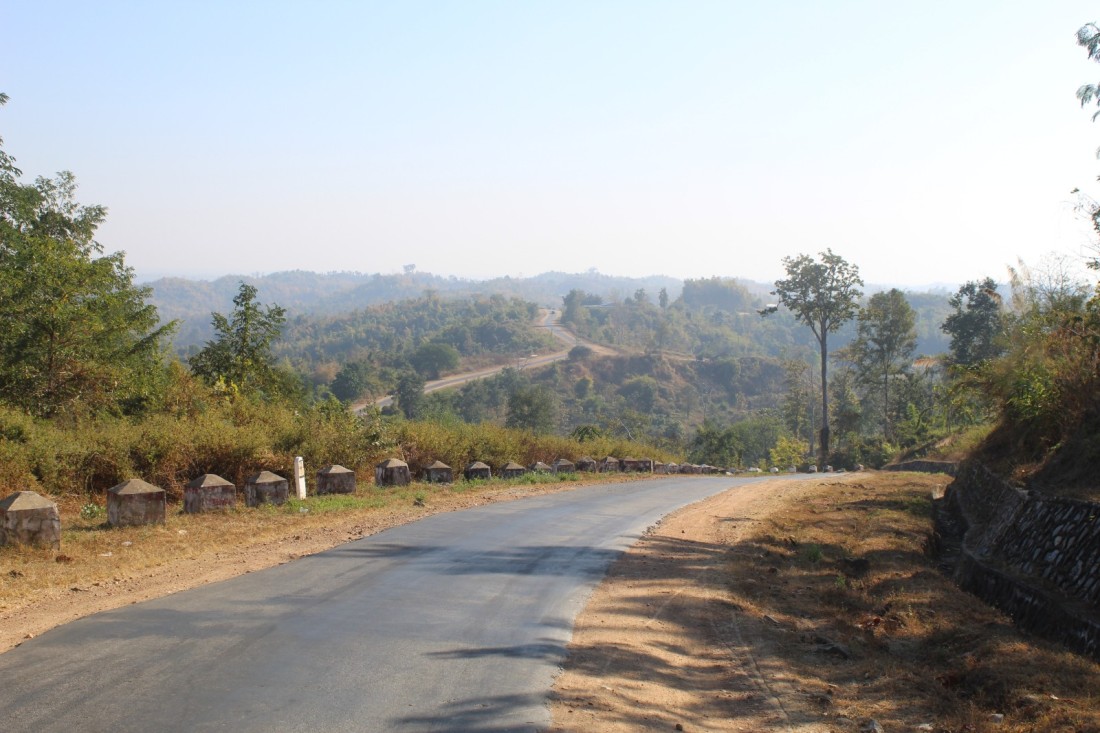 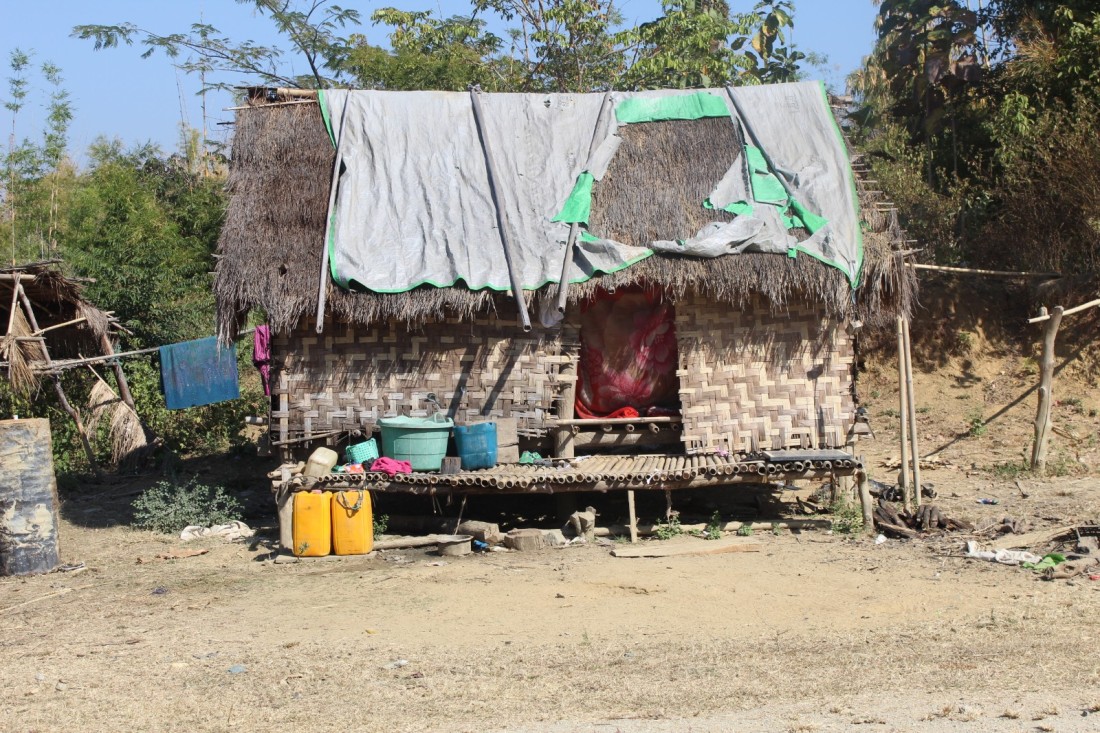 In the early afternoon I approached Naypyidaw, Myanmar’s capital. In the early 2000s the military decided they needed a new capital city and started to build one in the middle of a jungle. In 2005 the government was moved from Yangon to Naypyidaw. Most capital cities share a problem nowadays: a growing urban population causing congestion. Naypyidaw has the opposite problem: the government cannot convince anyone to live there.

Since so few people live there, the roads didn’t get any busier as I approached the city; they just got bigger. 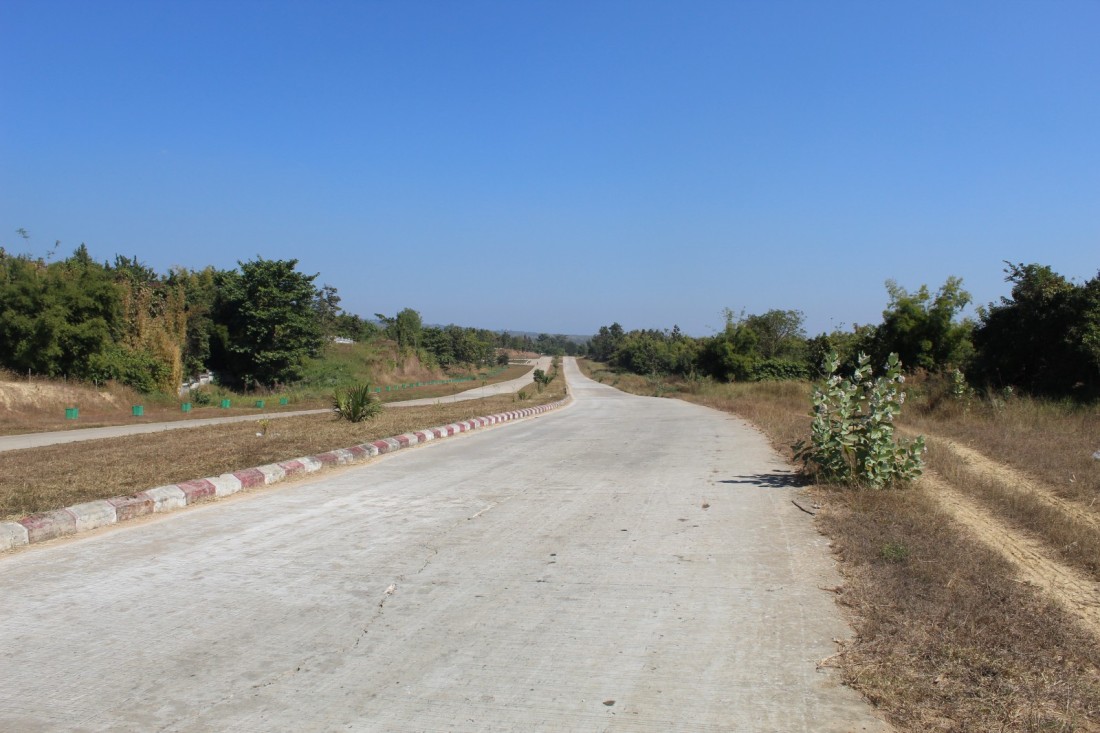 Even riding through the heart of the city there were few people around. I passed various ministries, as well as the parliament building and presidential palace. Tourists aren’t allowed anywhere near, and the military weren’t keen on pictures (I managed to take some anyway, albeit from a distance). 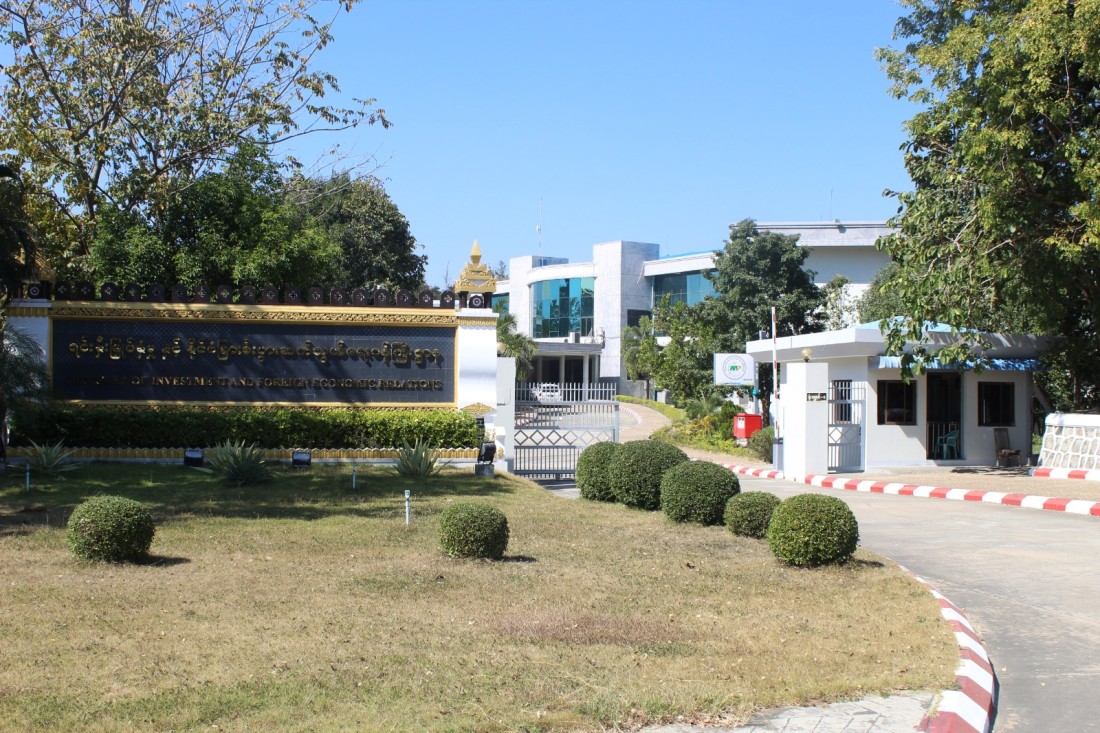 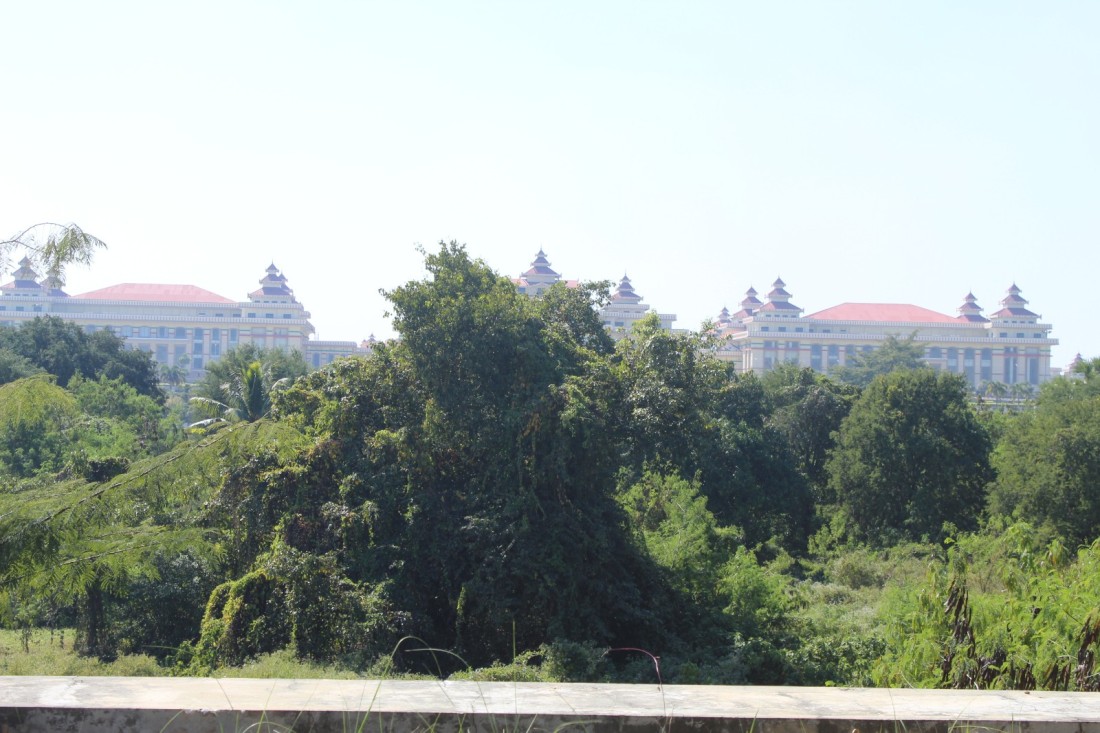 Along the main road through the city, there still wasn’t much around. There were a couple of malls and, optimistically, some high-end hotels. 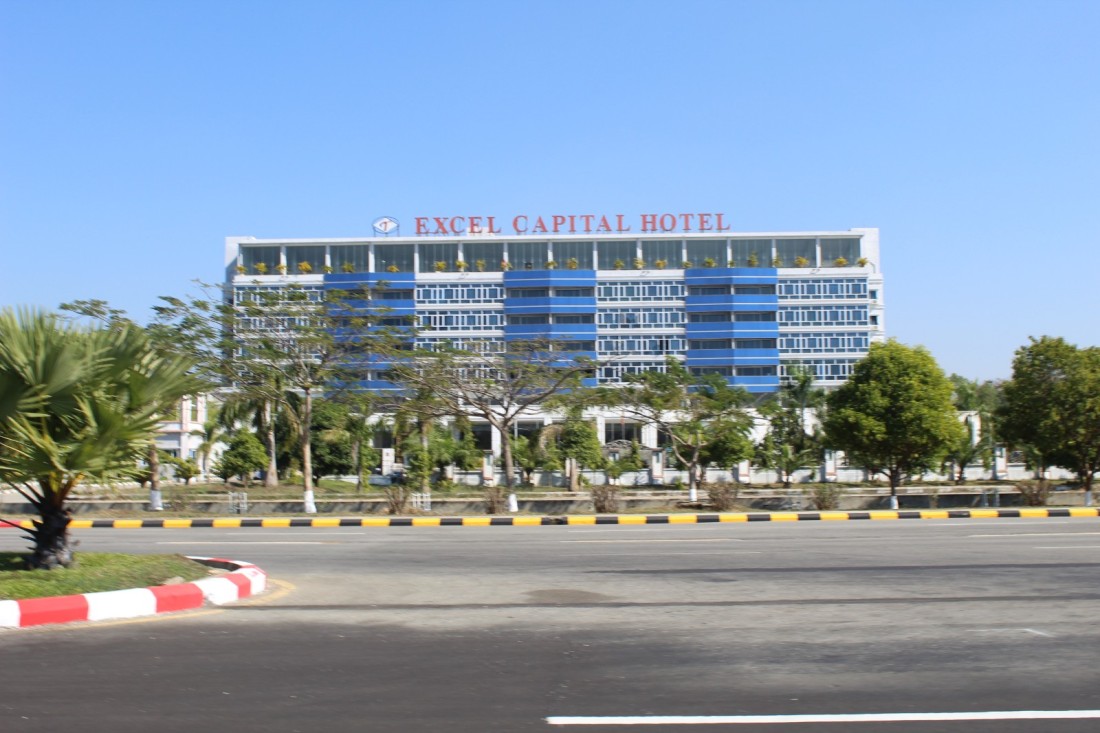 I rode out the other side of this strange, empty city and headed south. The rode was still quite wide, and a little busier now. 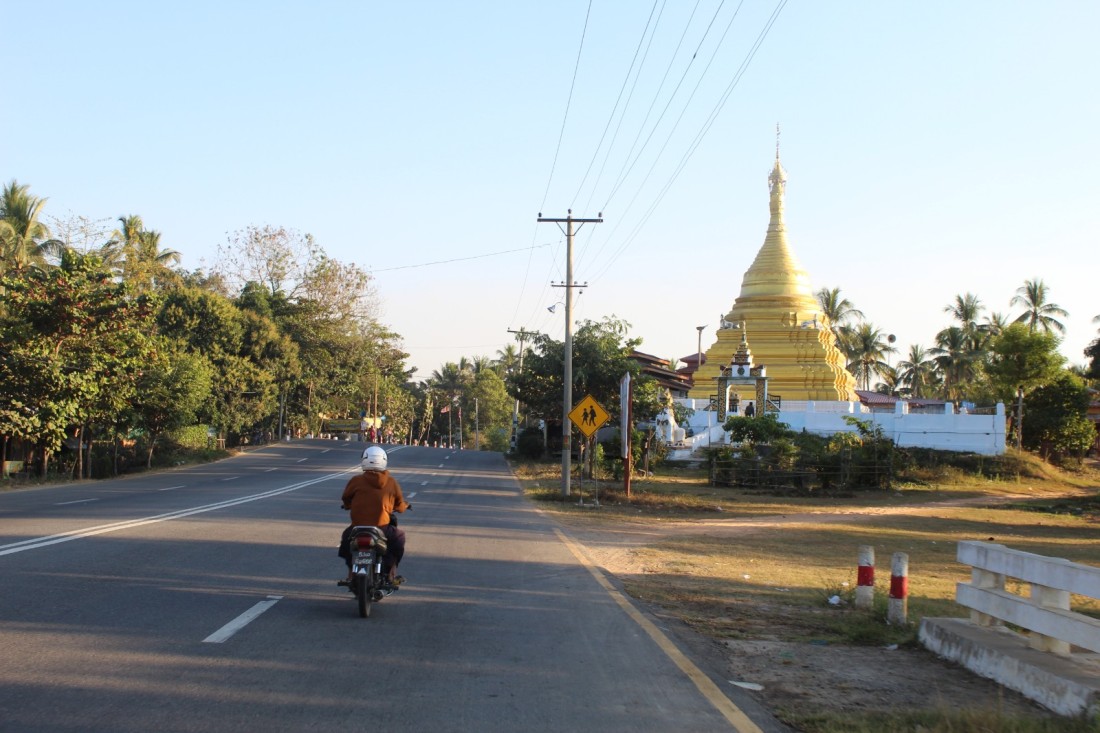 Most of the land took the form of rice paddies, the rest was built upon. This made it quite difficult for me to find a place to camp in the evening. 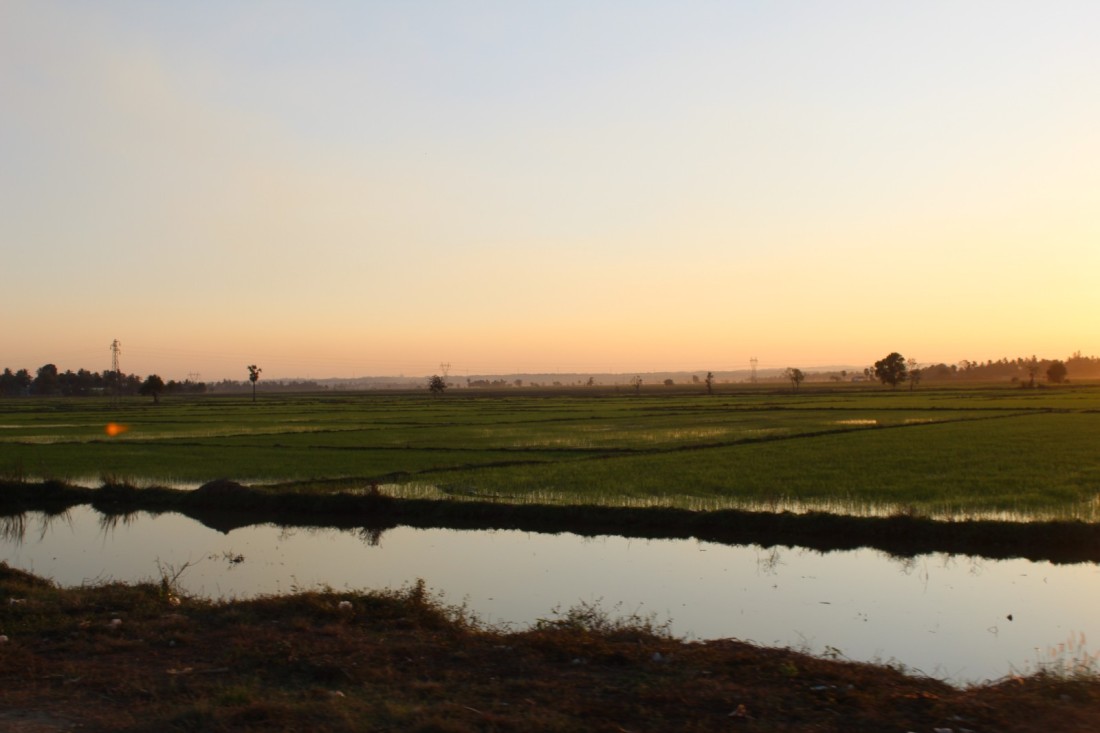 In the end I simply followed a dry riverbed away from the road, at the edge of a field. After a few hundred metres I reached a patch of trees which were to be my home for the night. All the water involved in rice farming meant there were many mosquitoes, so I set up the tent.

After an undisturbed night, I spent another hour riding along the highway before reaching the town of Taungoo and turning off onto smaller roads. To begin with it was still quite busy, but traffic lessened over the next couple of hours, as I rode across the plains.

I saw many monks in Myanmar. In the mornings, groups of young monks would walk through town, making a racket. Two of them pull a cart into which people are expected to deposit free stuff for the monks. Most villages have people sitting next to the road with bowls, collecting money for the monks. 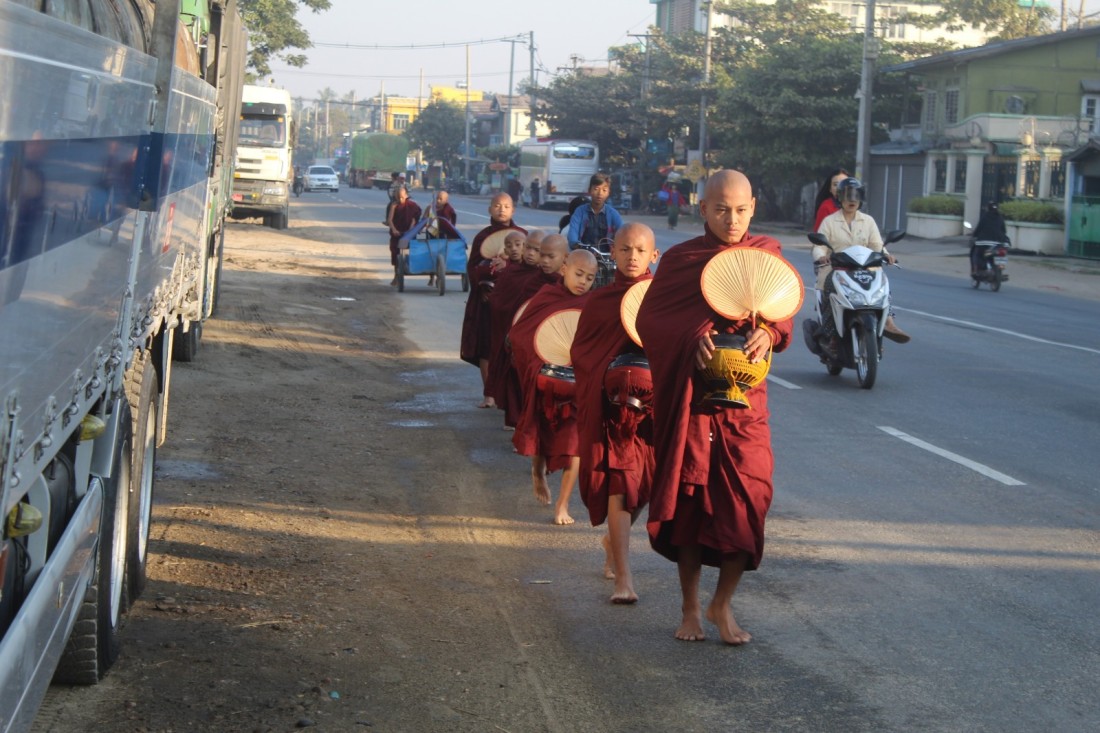 I generally stop to eat a couple of times a day, ideally finding somewhere a short distance from the road, out of sight. Since everywhere on this section was being farmed, there wasn’t really any way to do so. I sat under the shade of a tree, right next to the road – shade was very much a necessity here!

I did get a few people stopping to stare at me while I was there – of course, nothing like it had been for the last couple countries. Generally they just sat in their vehicles and stared for a few minutes, before moving on. As I was packing up, one guy came over and, as I didn’t understand him, kept repeating himself and shouting. That was irritating but well, I was just about to ride away anyway.

All the farming meant there was lots of fruit available. I stopped at a fruit stall and bought five bananas, 10 or so satsumas and a big bunch of grapes – for about £1 in total. 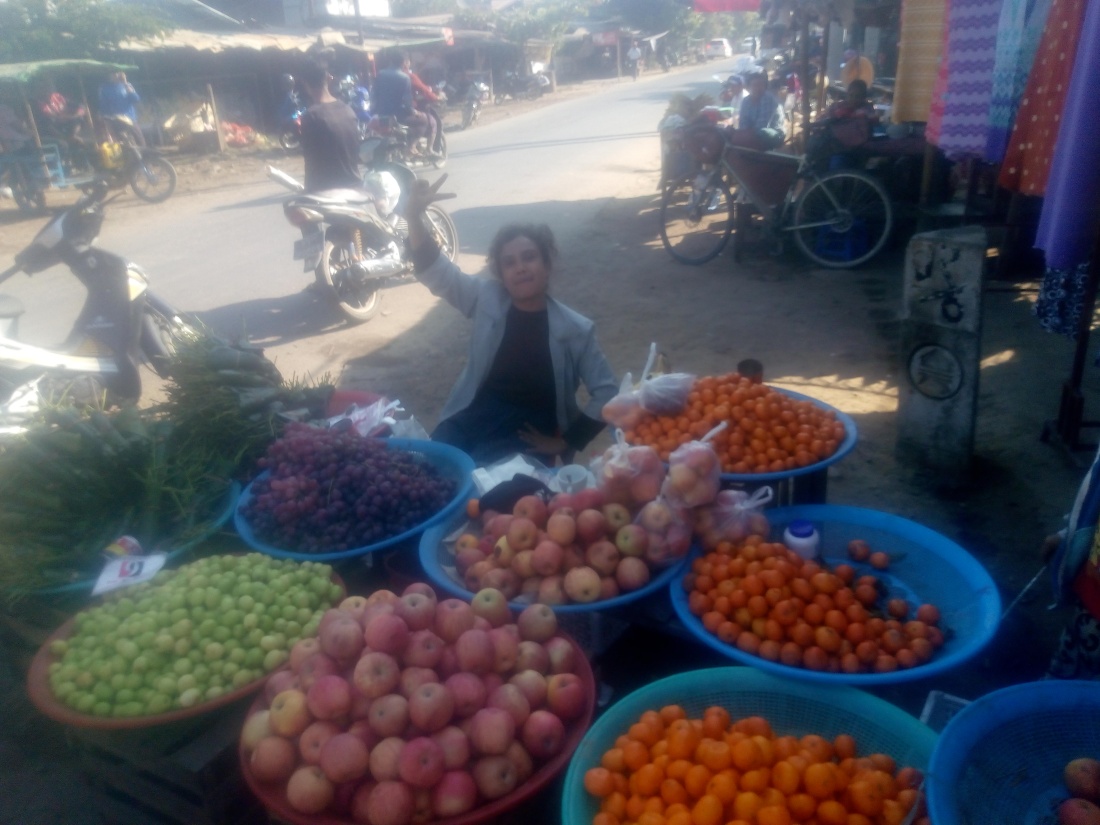 As I continued on, the farmland turned back to wilderness and the road turned to dirt. It was pretty smooth – better than many tarmac roads – but I soon started hearing a clunking sound from my bike. For a while I worried a hub had failed, but finally realised it was just my lock rattling against the frame! 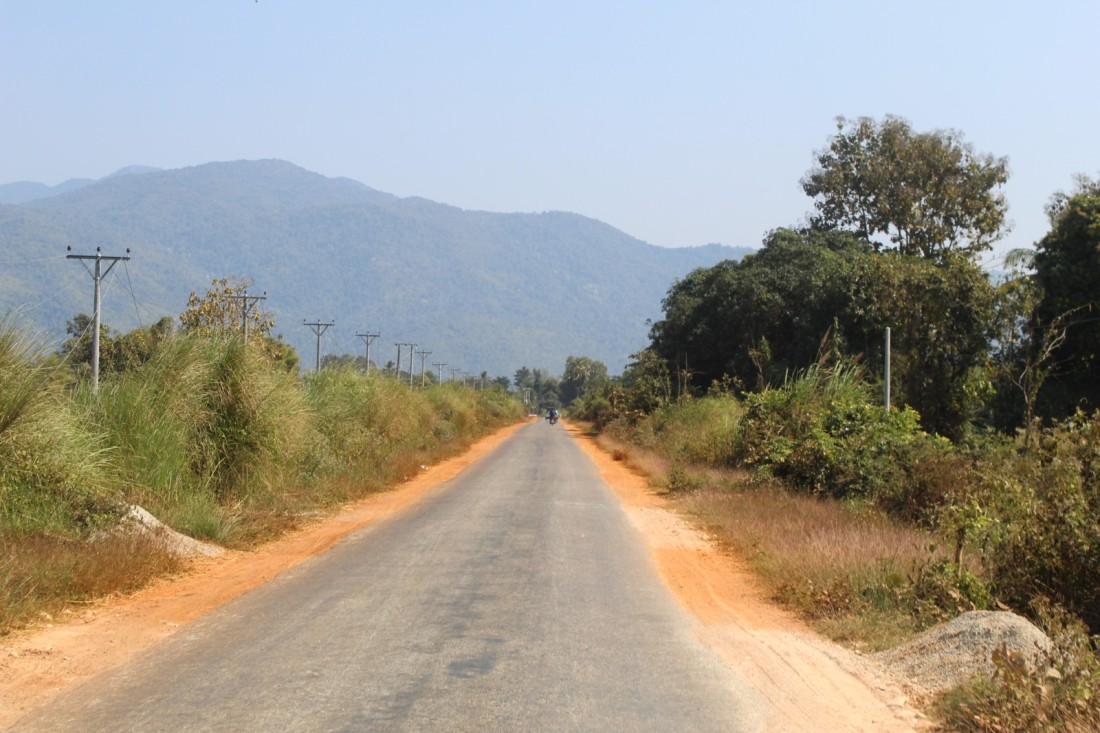 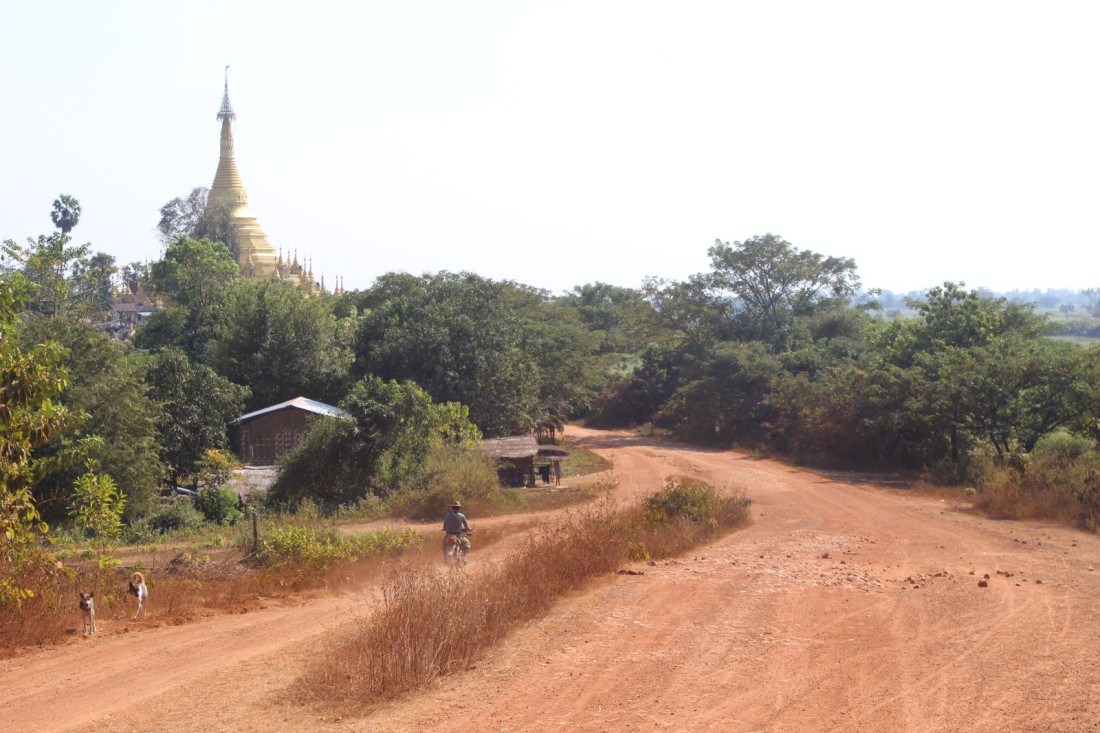 The tarmac resumed after about an hour or so. As I rode along, under the hot afternoon sun, a passing motorcyclist stopped to hand me a Lychee flavoured soft drink. As I was drinking that, another motorcyclist came along and gave me a bag of watermelon chunks! These random acts of kindness are really heart-warming to receive.

I was back on dirt roads by the evening, with a few short hills along the way. The last of these was the longest – though still less than 100m – and very steep. I rode my way up as the sun was setting, then wandered off and set up camp.

For much of the next morning I rode along dirt roads – or, at times, single-track. 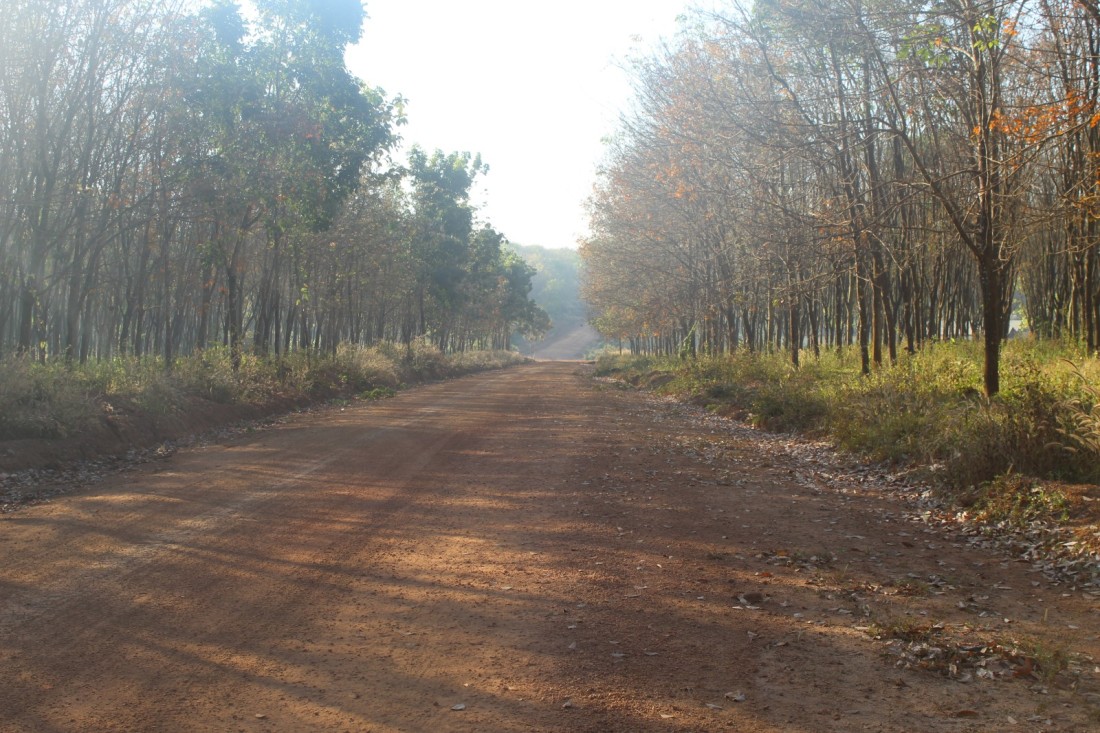 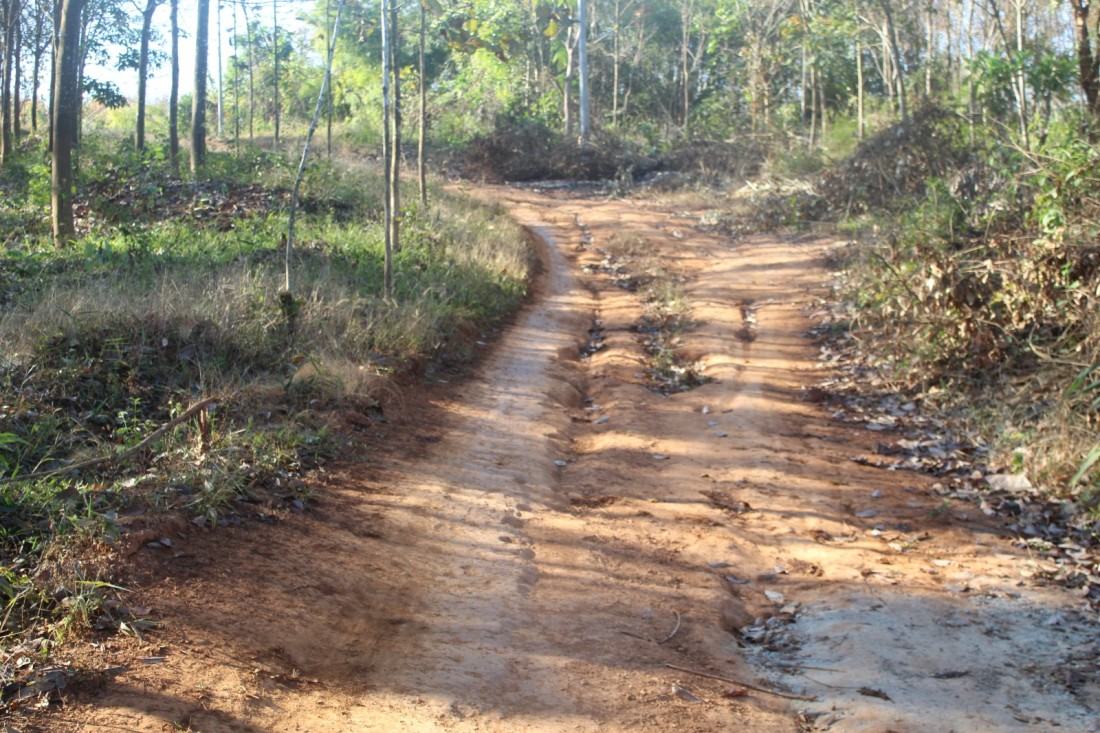 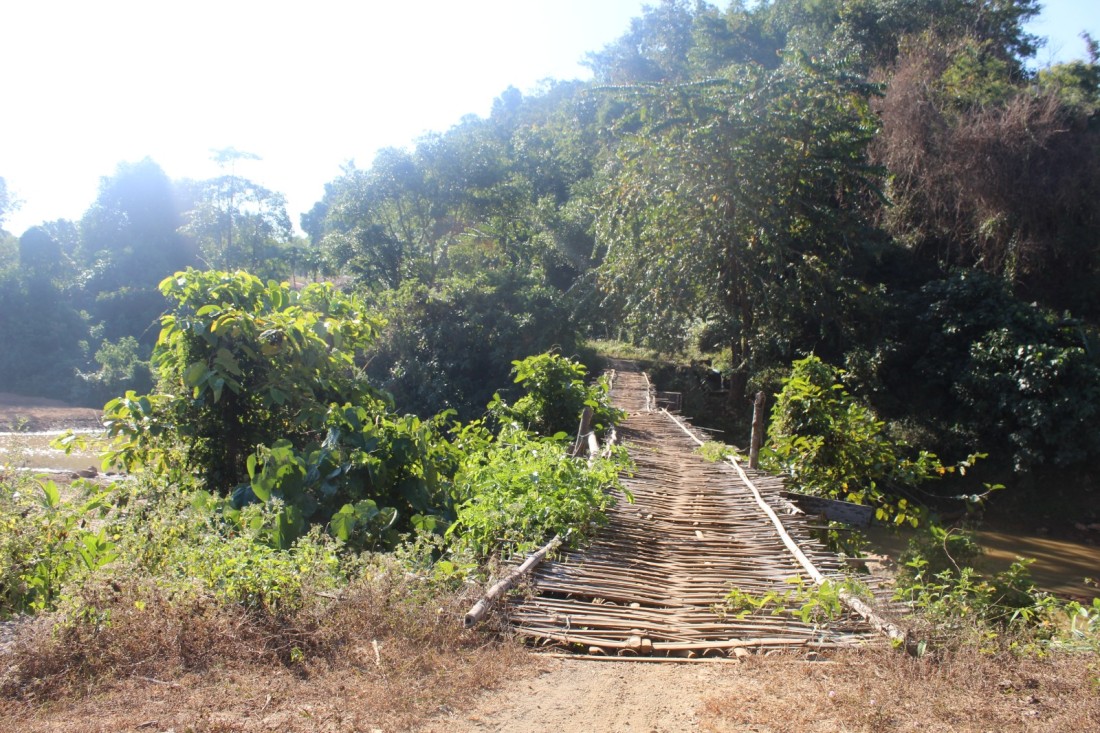 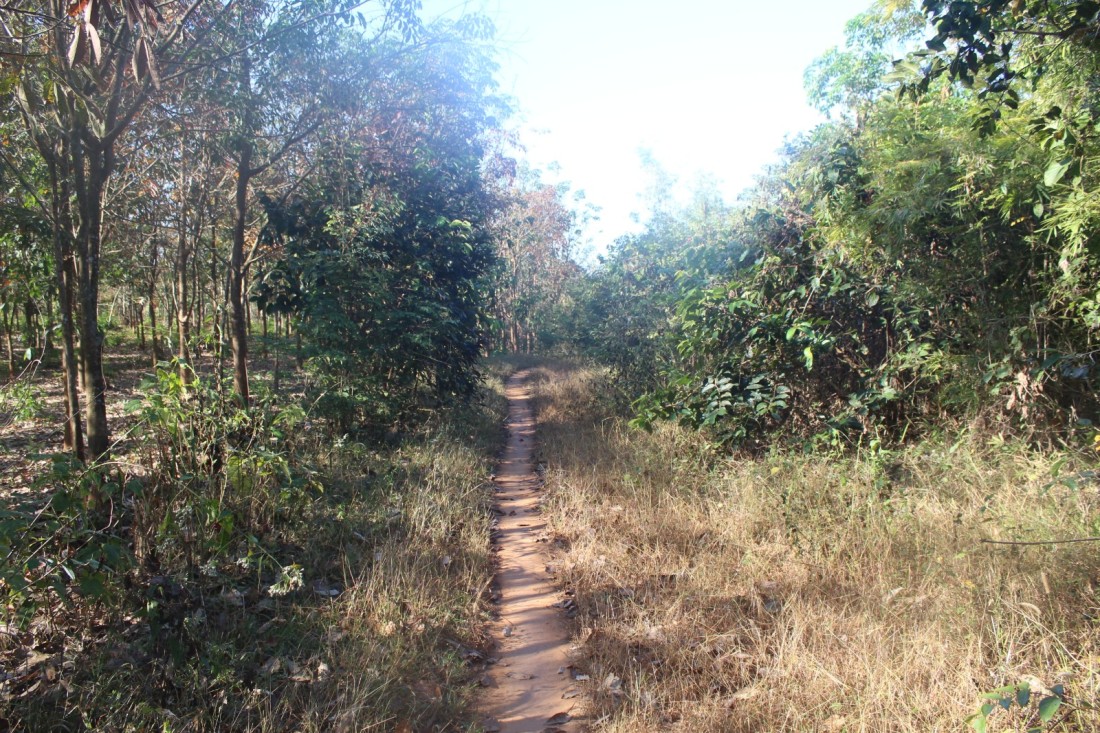 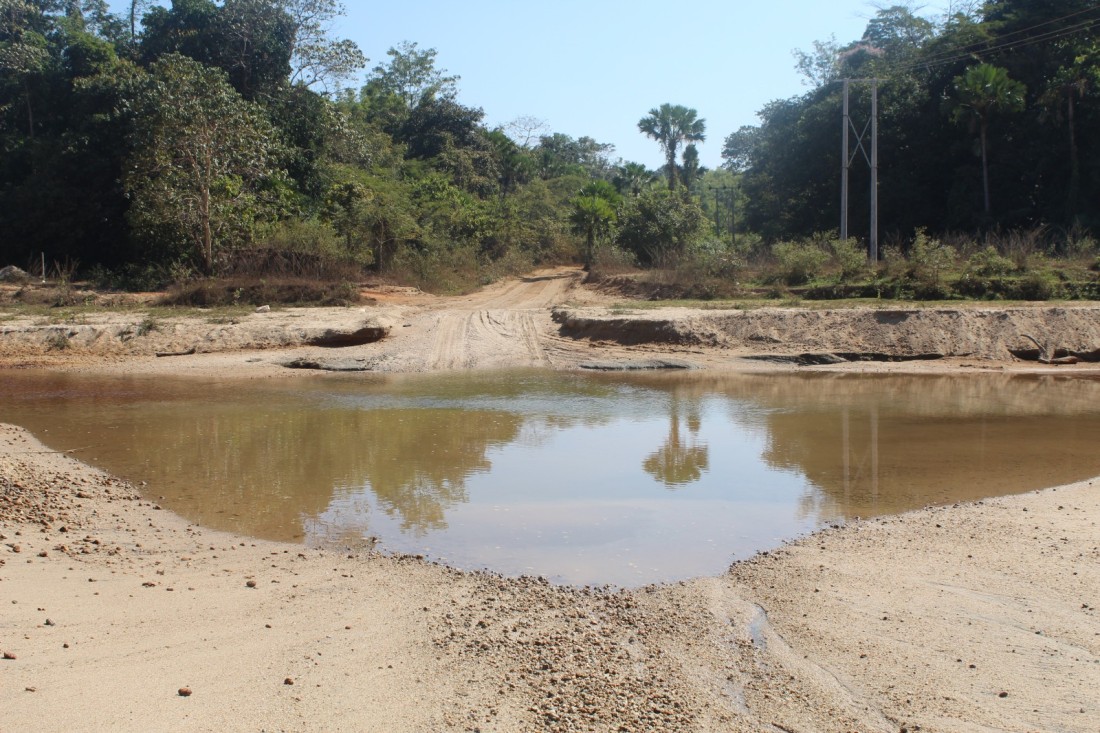 The dirt combined with my sweat to form a rather unpleasant-looking paste on my skin. It made it look as though my tanlines are even more ridiculous than the reality!

Later on I returned to the highway, passing a big Buddha statue atop a nearby hill. 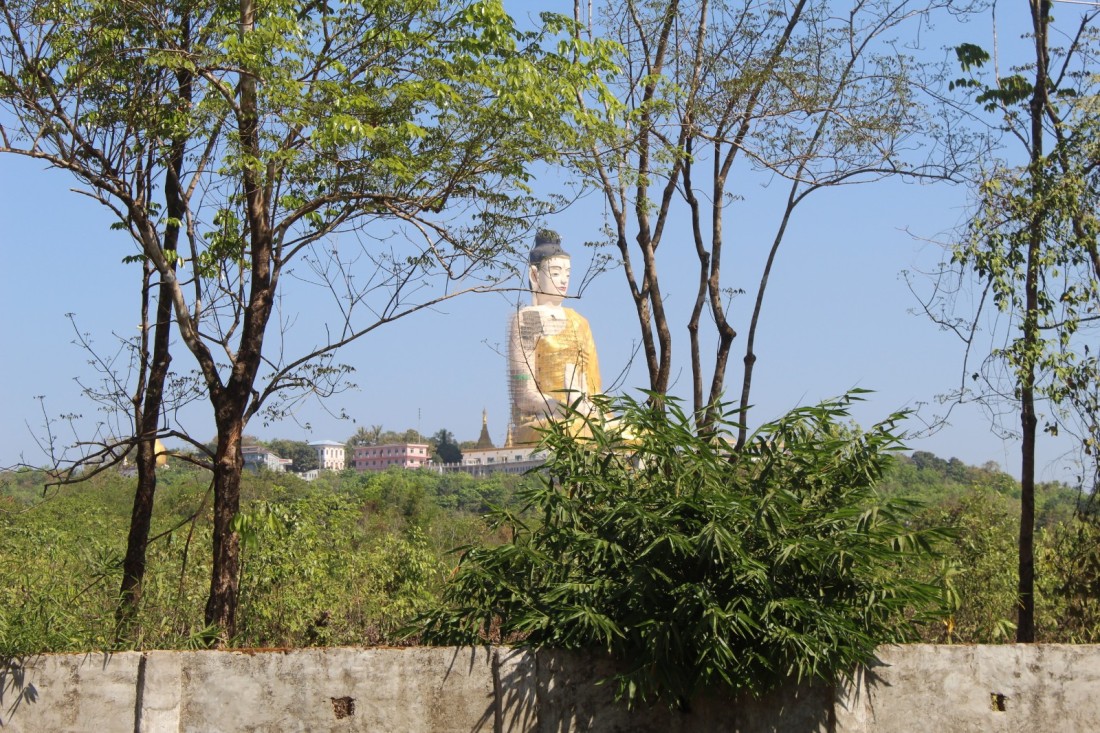 The highway was wide enough that the passing traffic wasn’t an issue, and I rode along for the rest of the afternoon, mostly through countryside. I did pass through one big town which had a particularly impressive temple. 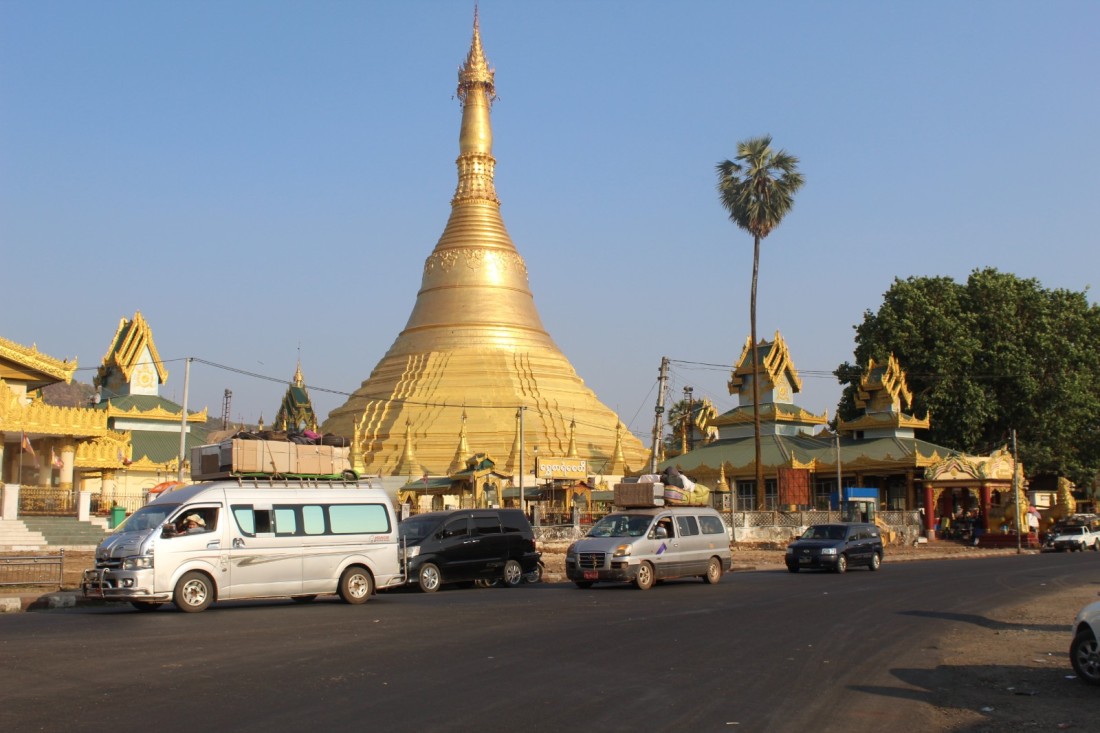 In the evening I wandered away from the road before setting up camp behind some bushes. An early night meant I woke up early the next day and set off at dawn, riding toward the Thai border. 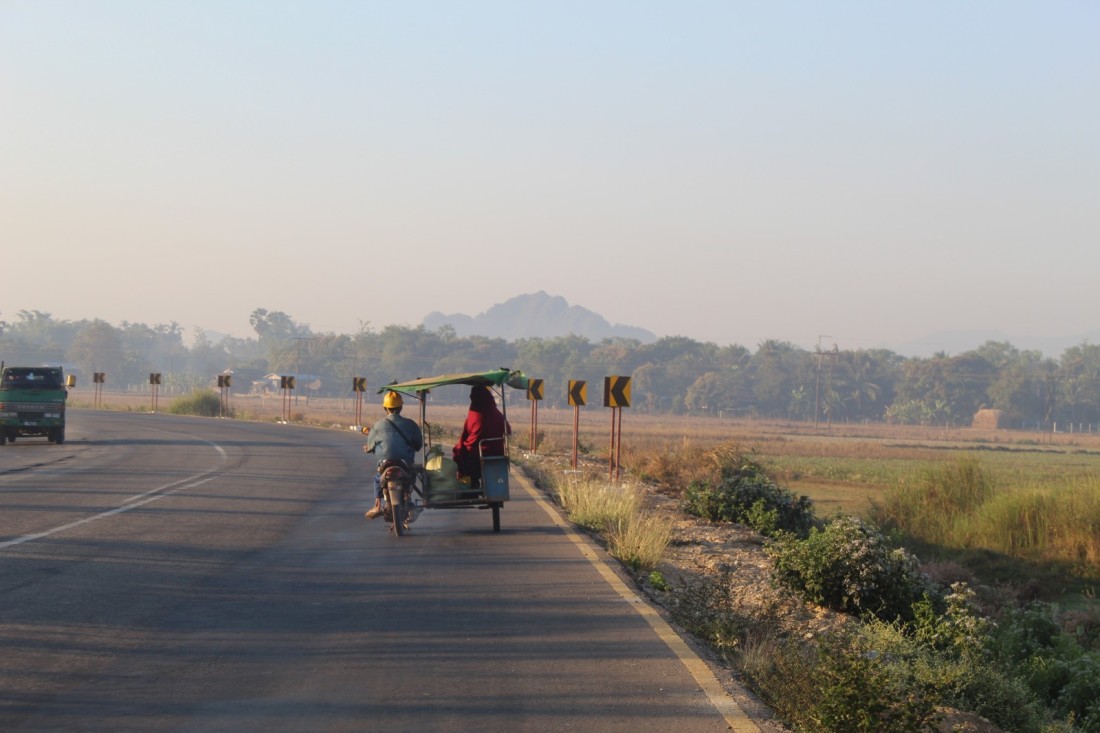 The road was flat but around me there were numerous hills, jutting up from the ground. They were often rocky and steep-sided. 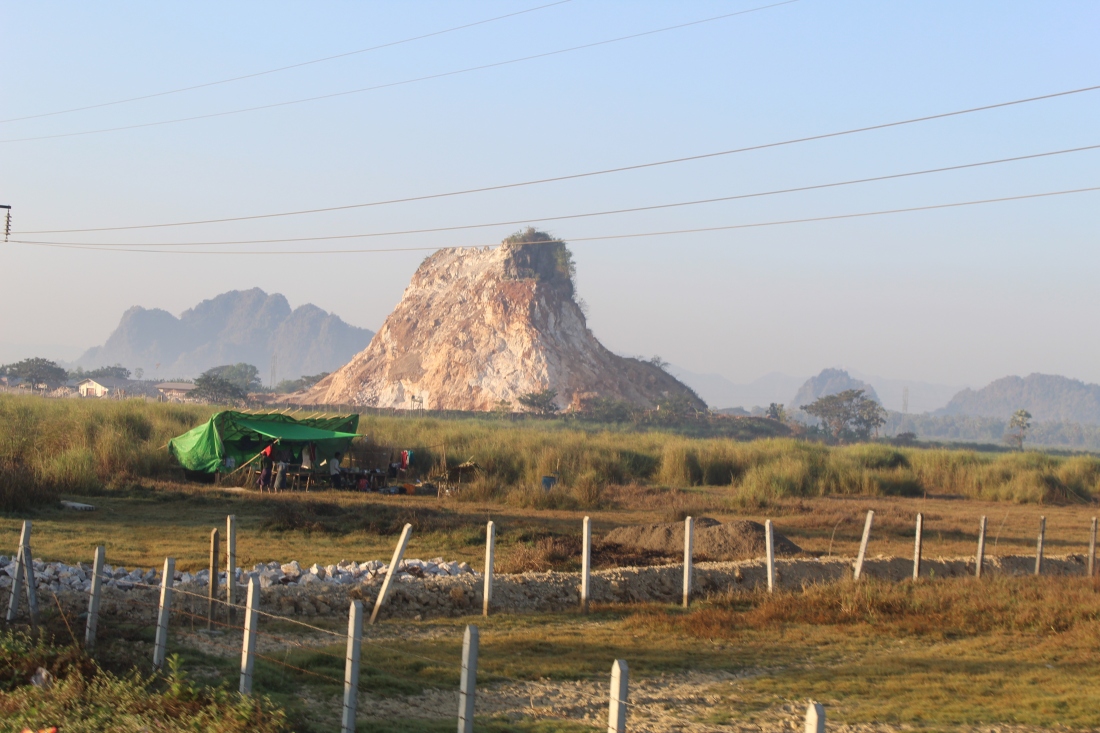 One section of road was undergoing roadworks and I spent a couple of hours bumping along a variety of surfaces, from smooth dirt to exposed rock to old, potholed tarmac. At last the road returned to its usual good form, and I started up a 500 metre climb. 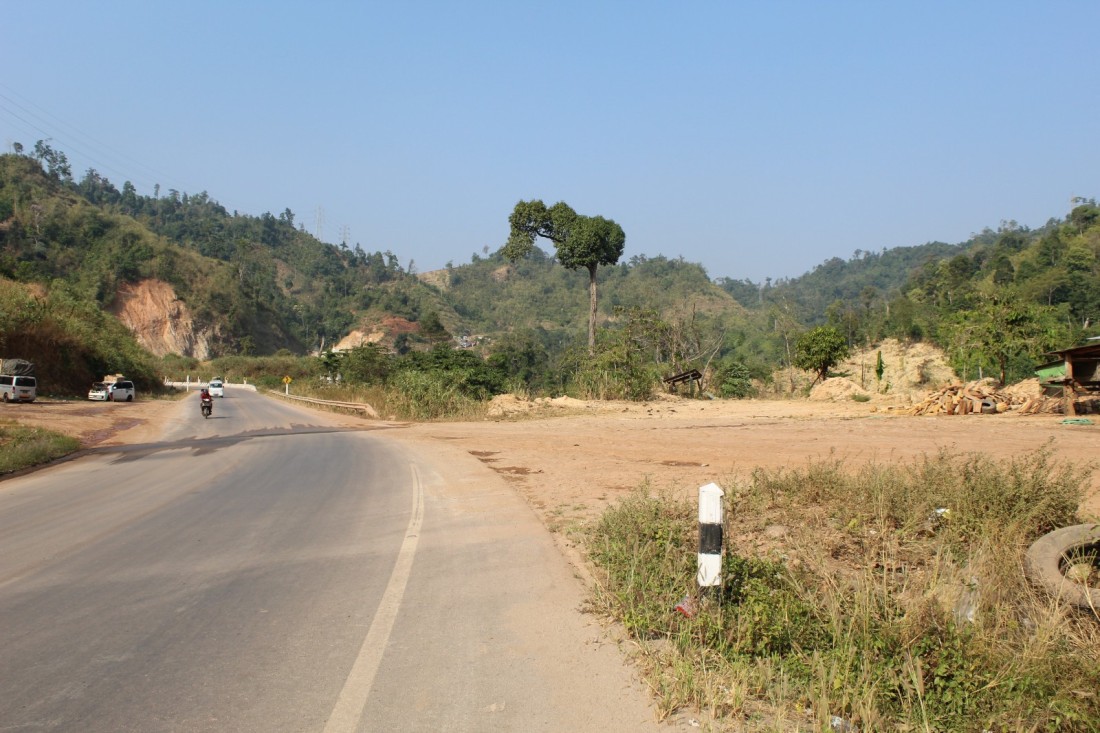 Shortly after beginning to descend, I stopped to buy a cold drink. The shop owner kindly gave it to me for free, and pointed out a hose I could use to wash. After the dusty dirt road, that was much appreciated!

I reached the town of Myawaddy, and rode to the bridge over the Moei river, which marks the border between Myanmar and Thailand. I was soon stamped out of Myanmar and rode across the bridge, swapping over to the other side of the road in the middle. 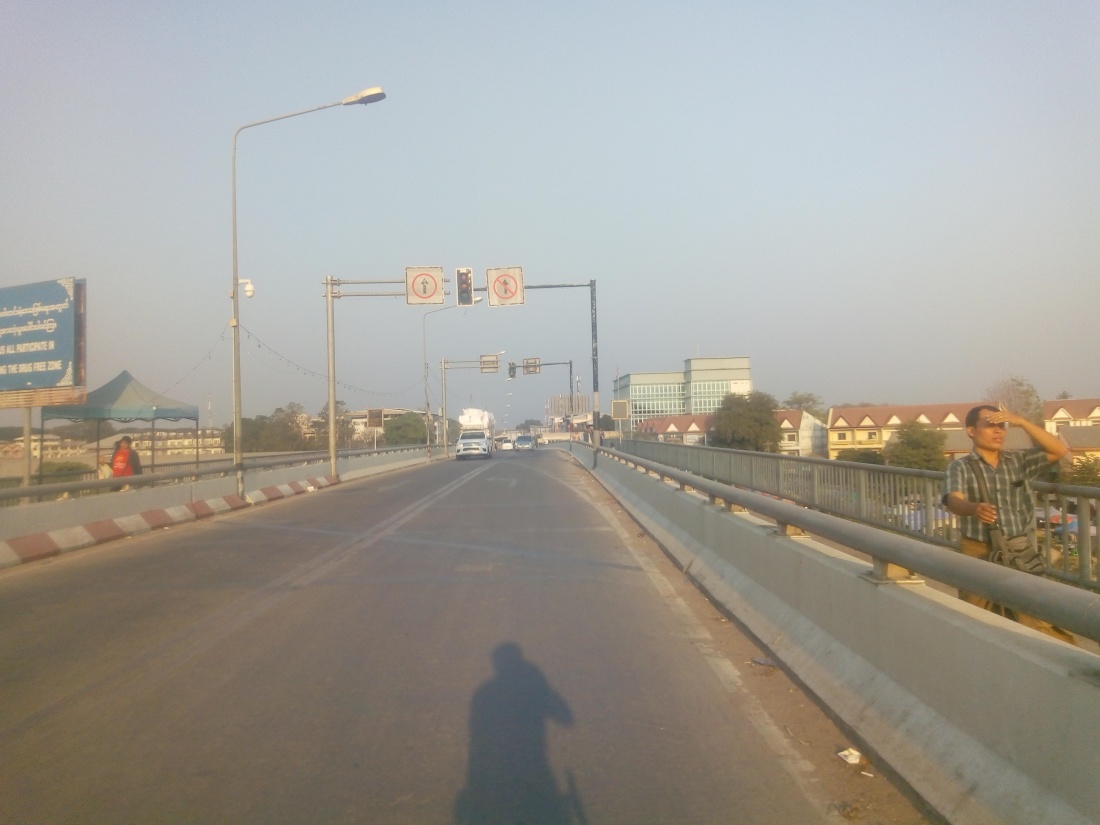 Thai immigration was also a simple affair and I set off cycling to Mae Sot, the border town. It was immediately clear that Thailand was much wealthier, with nicer roads and cars, as well as various international shops like 7-eleven or KFC. They even had Tesco! I made my way to Green Guest House and checked in. 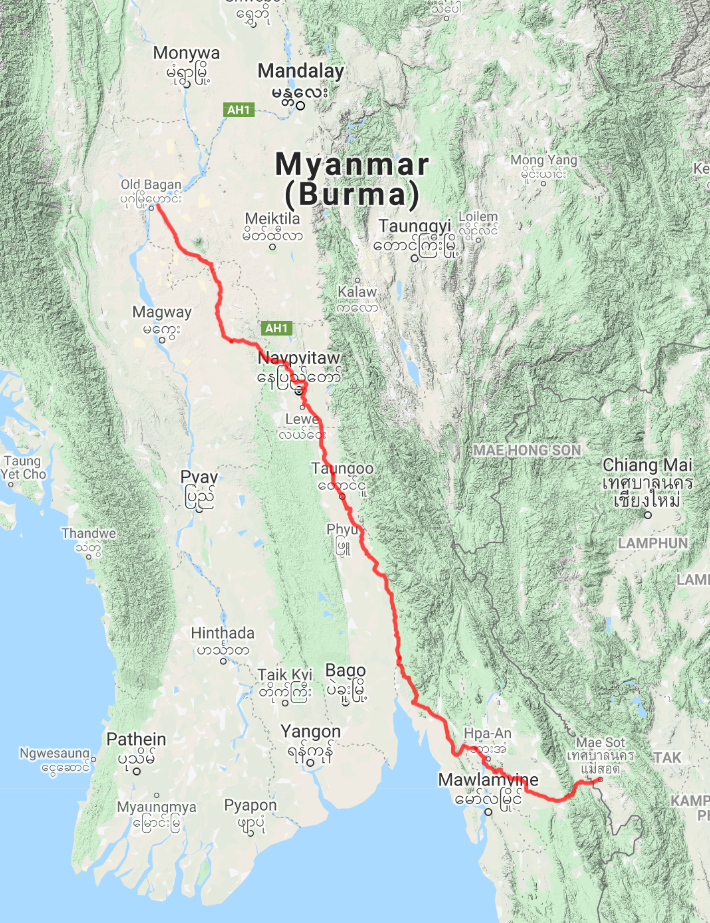 One thought on “Myanmar Continued”