A couple hours cycling brought me to the Bangladeshi border. I went to Indian customs and joined one of the longest queues I’ve ever seen. There must have been close to a thousand people. I was asked to leave my bike outside but, as I went to lock it up, some soldiers came along and told me to take my bike and go direct to immigration, skipping the queue. White privilege, I suppose.

Indian immigration was very quick – my passport was stamped and I was sent on to Bangladeshi immigration, which took somewhat longer. I needed a visa on arrival, which meant filling in a couple of forms. The guy dealing with me then walked around talking to several people. I didn’t understand what they were saying and heard the word “cycle” several times. I was worried they might be saying crossing on a bike was a problem, but apparently not. I paid $50 for the visa and, after about an hour a half at the border, rode off to Bangladesh. 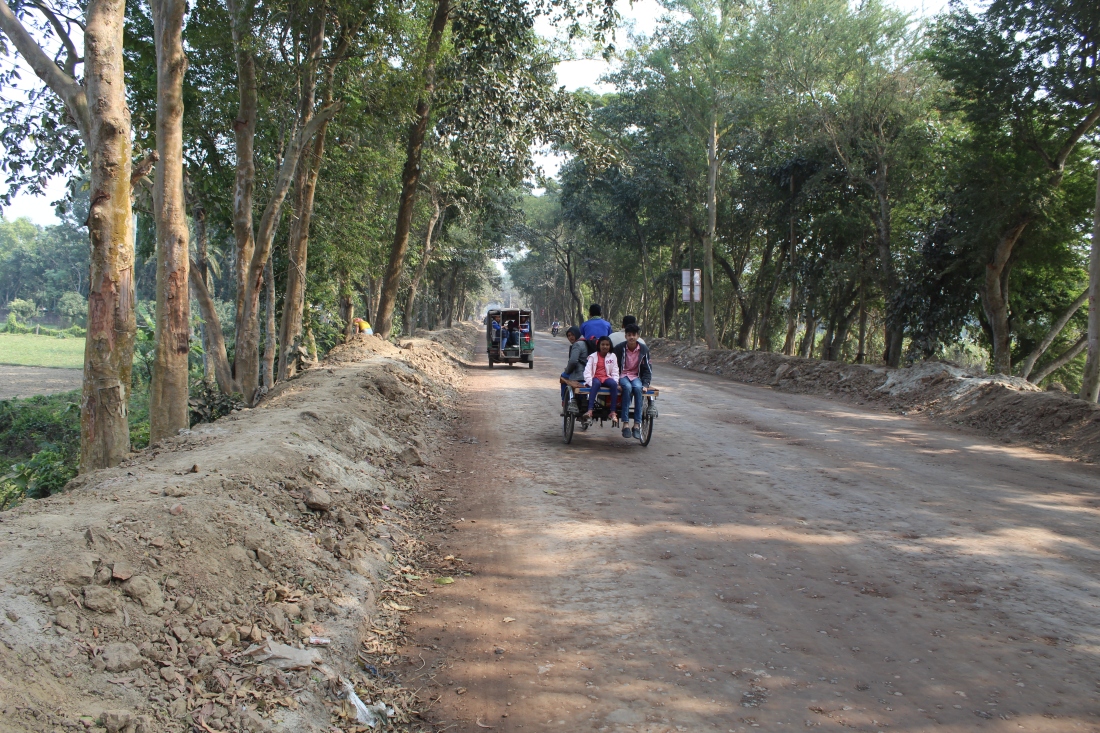 Bangladesh was ruled as part of British India for some two hundred years. After Indian independence, when the country was partitioned on primarily religious grounds, it became part of Pakistan. Some twenty-five years later, increasing recognition of independent Bengali identity led to Bangladesh’s independence (after a war).

The Bangladesh share ethnicity and language (Bengali) with West Bengal, the neighbouring Indian state. The major difference is religion: Bangladesh is majority Islam but with a sizable Hindu minority, West Bengal the reverse. Perhaps the first noticeable result of this was the complete lack of female staff on the Bangladesh side of the border.

Bangladesh is a relatively small country, slightly larger than England. It has, however, about three times the population. It is the most densely populated large country in the world. A lot of this population don’t seem to be doing a great deal but standing around in villages. Whenever I stopped in a village, everyone would gather to stare.

As I rode into Bangladesh, this dense population was obvious. Any land that didn’t have buildings on it consisted of farmland growing a variety of crops. 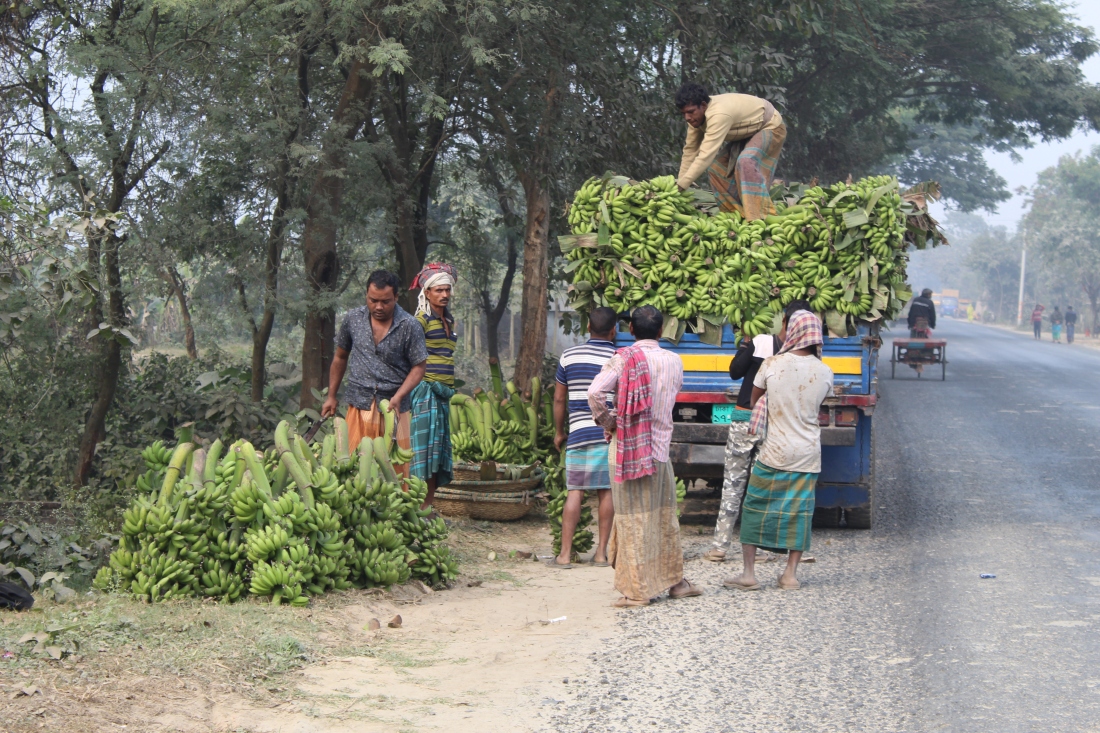 As in India, cargo tricycles formed a significant part of the traffic. Here, though, they tended to be electrical rather than pedal-powered. Also like India, there were lots of bicycles with various novel ways of carrying things.

After a couple hours riding on bumpy roads, I reached the city of Jessore. The bypass road ensure that only local traffic entered the city itself, making for a less unpleasant cycling experience. I went to an ATM and hoped to buy a sim card, only one operator had a shop open and wouldn’t sell me a sim without a local ID card. Apparently Christmas is a national holiday in Bangladesh so the other operators were closed.

I resumed cycling, on roads with traffic as irritating as those in India, but on roads that were if anything narrower leading to more dangerous manoeuvres.

In the evening I reached a large town, Jhenaida, and asked around for a hotel. As always a crowd gathered when I stopped. One guy, Rashid, volunteered to lead me to a hotel. He spoke a bit of English and was very friendly. He translated for me with the hotel staff and, though I couldn’t understand what they were saying, I got the impression he negotiated me a lower rate, 600 taka (£5).

Perhaps Bangladesh’s reputation is most famously that of a clothing producer. Indeed this town seemed to be full of tailors and textiles shops. I decided I would take the opportunity to replace the zip on my frame bag. I’d had it replaced in Pokhara but the guy used a very bad zip that never really worked well, and now doesn’t work at all.

The tailor I went to said that his sewing machine wouldn’t work on the thick fabric of my bag. This was translated to me by Tariq, a lawyer, one of the many men who’d gathered around me when I stopped at the tailor’s shop. It was decided that I should go somewhere else, and Tariq led me. First stop was to buy a zip, for 15 taka. Next up we went to a cobbler who would sew the zip on by hand, for 50 taka. This took half an hour or so, so Tariq and I went to a teahouse while we waited. It took quite some insistence for him to let me pay for his tea!

I set off the next morning on another main road. Bangladesh is a city of a great many rivers, and bridges are expensive. This means there are few bridges across each river, which effectively limits route options – unless one spends a long time waiting for a boat to cross each one. The largest bridge today was across the Ganges, known locally as the Padma. 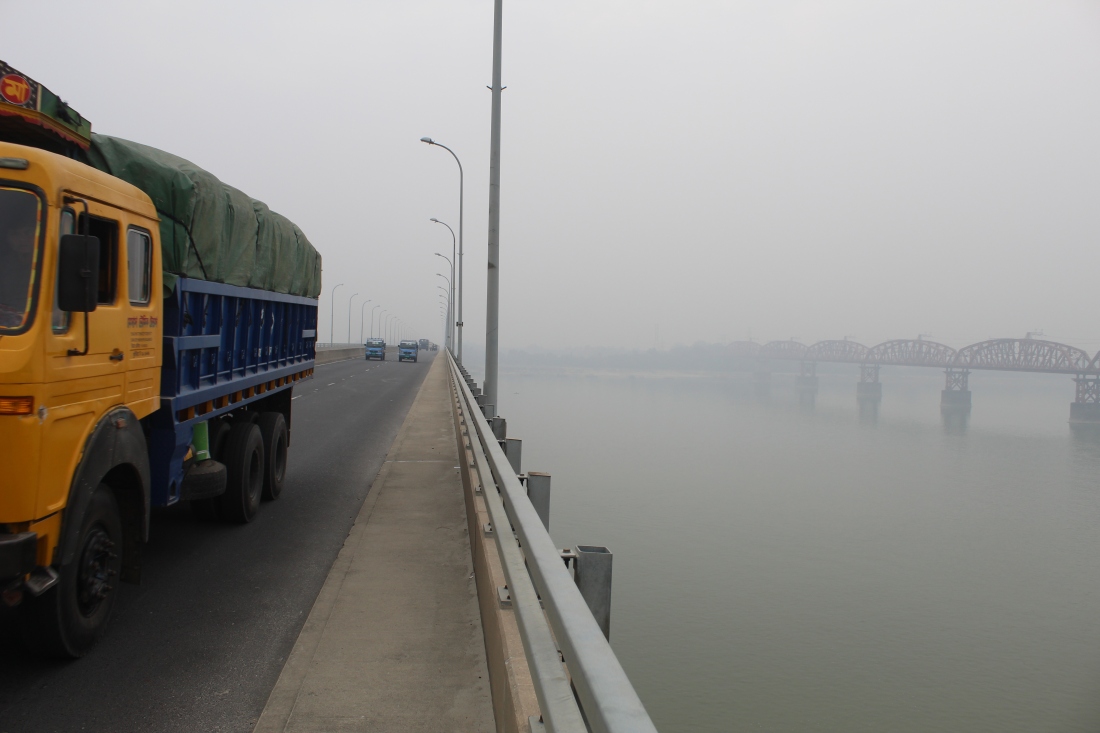 Across the bridge there were hundreds of workers. There was also a sign for a supermarket. These are rare in Bangladesh, as are signs that I can read – most are in Bengali script. There was something else strange about the sign but it took me a minute to realise what it was. It was in Cyrillic! Apparently the Russians are building a nuclear plant here, explaining the workers and the Cyrillic.

I tried asking around about a hotel but the only directions I got were to a town 10km out of my way. I continued cycling. I hoped to find a hotel but had no such luck. As the sun set, I passed a town and asked again about hotels. It seemed promising and I cycled through the town, following directions. I ended up at Hotel Star. It was a restaurant. Just because something is called Hotel does not mean it is a hotel; not here anyway.

I then ended up at what was described to me as lodging. It was locked up and a crowd gathered as I stood outside. There was a woman who spoke some English, who translated that this was a government rest house. Apparently staying there would require special paperwork. Someone thought there was some sort of missionary centre that I might be able to stay in. At this point I decided to cut my losses and use what little daylight remained to ride out of town.

I rode along as darkness fell, struggling to find somewhere to camp. There were houses practically everywhere, or flat open fields where I’d be visible. Finally I spotted a small area of trees and walked along the edge of a field to get there. There wasn’t space to set up the tent so I just slept on the ground, with my tent as a sort of bivvy bag. It rained in the night and I got pretty wet, but it wasn’t cold so I didn’t really mind.

Given my far from ideal camp site, I woke early and started riding as soon as it got light. The day began on some small bumpy roads through wet, cloudy weather.

I rejoined the main road and it had what could almost be described as a cycle path. Running parallel to the road, this narrow lane was primarily used by the small three-wheeler vehicles that are predominantly used as local transport. Staying away from the lorries and buses made a big difference. 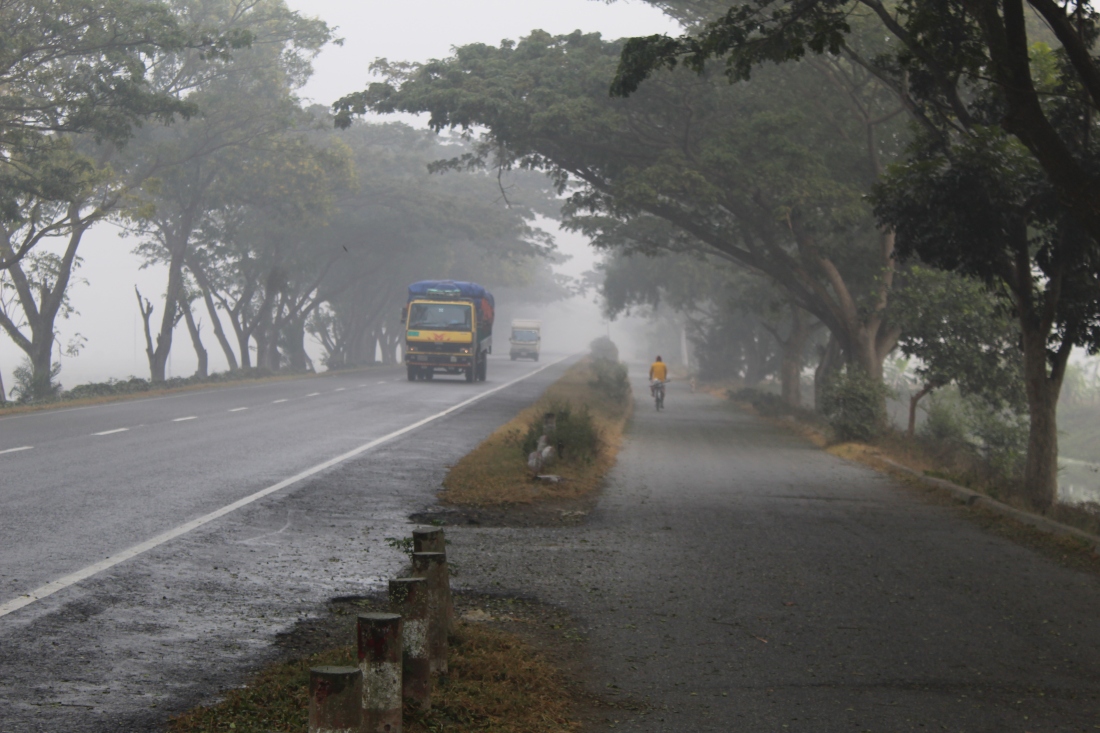 Late in the morning I reached the Brahmaputra river. When I went to cross the bridge I was stopped by a group of 10-15 men. One was a police officer; the others mostly seemed like hangers-on. They were pretty adamant I wasn’t going to be able to cross the bridge by bike. They were insistent I put my bike in a truck; I was insistent that wasn’t going to happen. I asked about a boat and eventually got them to confirm that there was a boat from a nearby town.

They didn’t want me to take the boat and started making things up. One doubled his earlier (accurate) estimate of the distance. One said the price was 1000 taka. No, 5000 taka – £45! That was obviously not true.

I cycled over to the town and by luck I quickly found the harbour. I saw people carrying sacks on a road which seemed to lead nowhere. I followed, and found several boats. Checking my map for the name of the village on the opposite bank, I asked about a boat to Gobindashy.

There was a bit of confusion but I was able to confirm that the boat was leaving either at two o clock or in two hours (since it was now 12.30, these were pretty much the same thing. I put my bike on the boat and read my book for the next couple hours, as the boat gradually filled. I quite liked it here – the people were quiet and much less inclined to staring than usual. 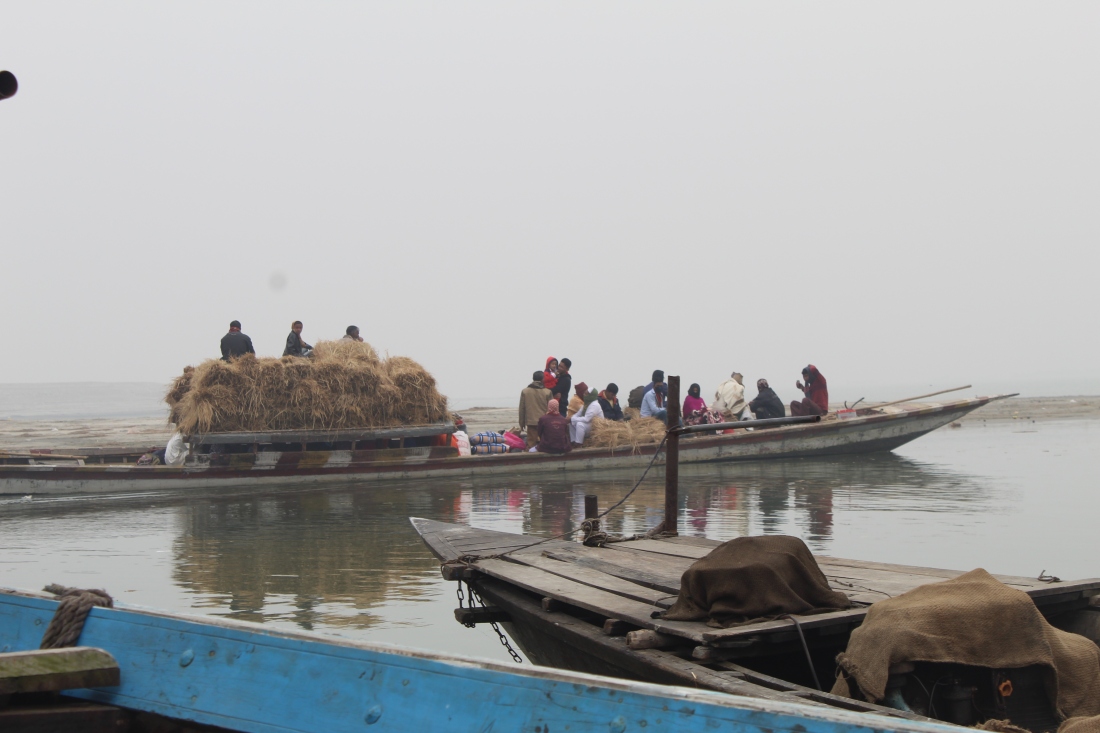 We eventually set off after two hours, with several families on board and a few sacks of what looked like oats. The river was about 12km wide but due to several islands and sand banks, our crossing was more like 20km, which took about an hour and a half. The price was 60 taka (£0.55). 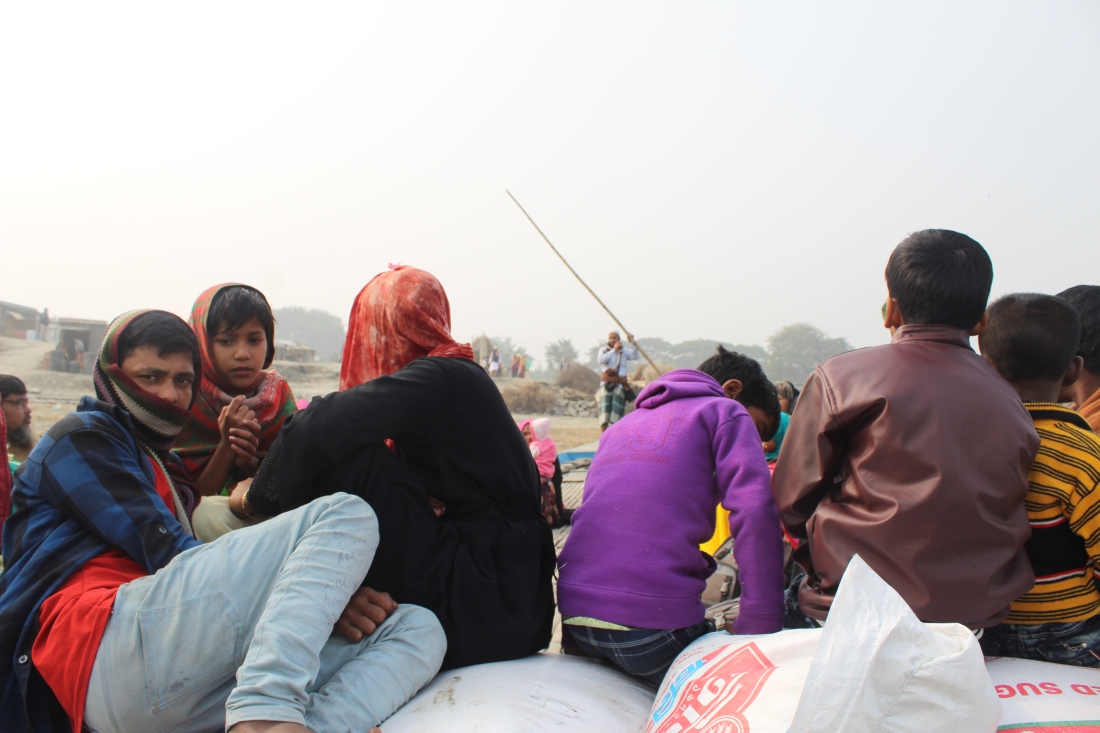 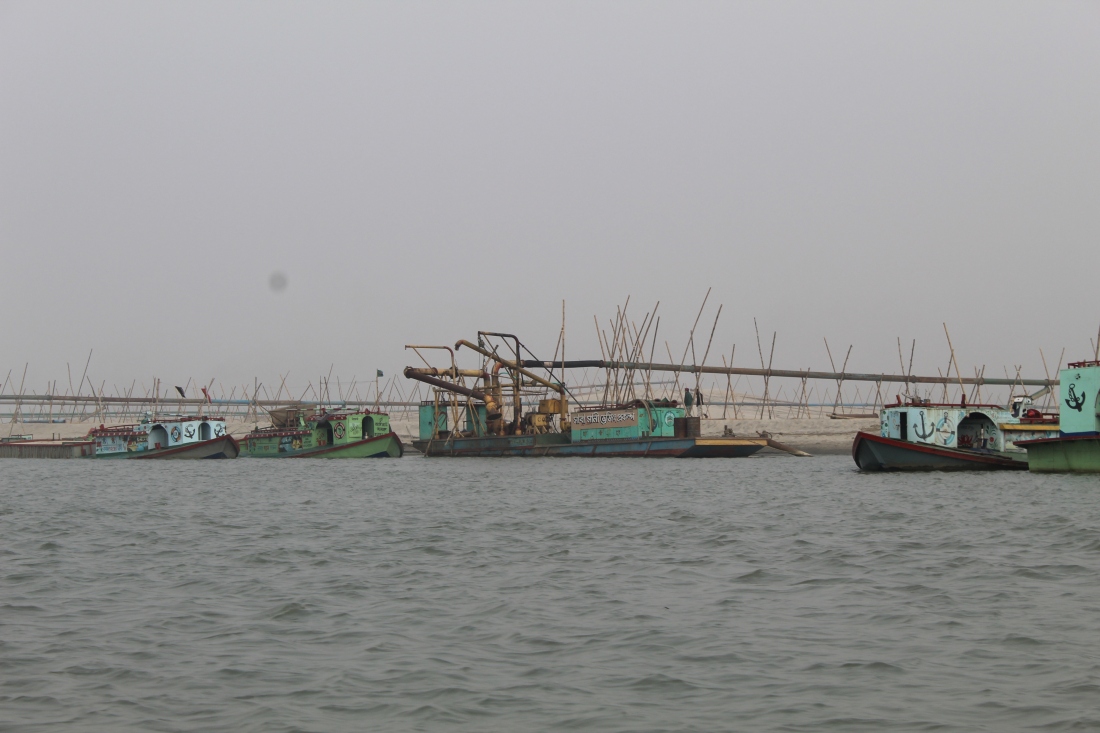 After the crossing, I rode for an hour or so until I reached a hotel, where I stayed the night.

A puncture in my front tyre delayed my departure the next morning, but eventually I set off, initially on small to medium sized roads. In the early afternoon I reached a river and took a boat across. It was a narrow river and the boat was constantly crossing back and forth, so there was no waiting. 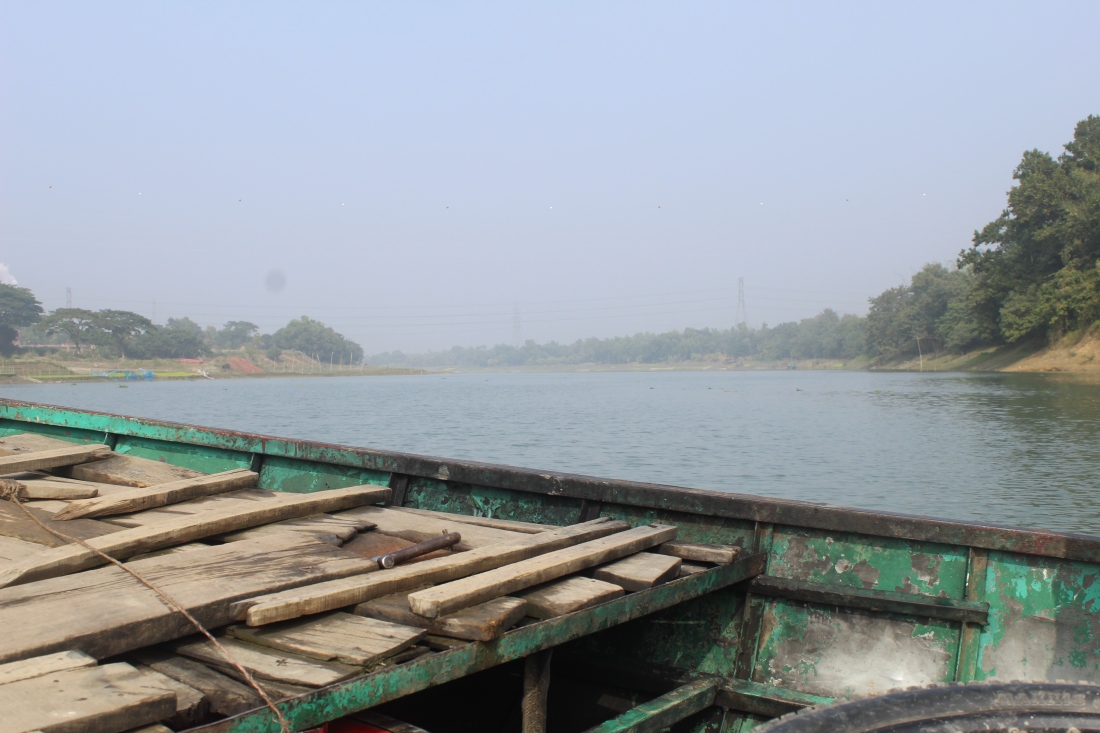 After the crossing I rode along a wonderfully quiet road through a forest. There had been a few sections of forest today, a real rarity in Bangladesh.

I turned off on to some small tracks leading through the jungle. Many of the trails weren’t marked on my map, so navigation turned into guesswork – picking the trail that seemed to be going the way I wanted to go. It was really fun!

I returned to larger roads for the last hour of the day, and approached another big bridge, this time over the river Meghna. I was worried there might be an issue cycling over it, but I was fine – in fact hundreds of people were walking across. Over the bridge, in the town of Ashuganj, I looked for a hotel. I passed on the first place because it didn’t have WiFi. However everywhere else was ridiculously expensive. One place was 5000 taka – £45! They did very kindly let me use their WiFi, so I confirmed that the border crossing I wanted to use is accessible to foreigners. That was all I needed the internet for, so I returned to the first hotel. Even this cheaper option was 1000 taka.

Apparently Ashuganj is the site of a major power plant that produces 25% of the country’s electricity. I suppose these expensive hotels are for bigwigs visiting that site. There are probably cheaper places for locals, but as a foreigner I’d have no chance of finding them.

The next day was fairly uneventful as I mostly spent it riding on fairly boring, flat roads. The one noteworthy thing was a street that was horribly dirty even by local standards.

As was often the case in Bangladesh, I passed several brick making sites. The bricks are stacked up outside in their thousands.

I stopped for the day in Sylhet, and decided to take a rest day before heading to the Indian border. The part of Sylhet seems to be fairly well off, with such luxuries as Pizza Hut and a supermarket. It was strange to hear English spoken in a familiar accent, as there were many British Bangladeshis here visiting family over the Christmas period.