Not long after setting off this morning I saw a group of camels in the road. When they saw me coming, they ran away – along the road. When I caught up to them, they started running again. Every few hundred metres they’d stop, then start running when I got close. Well, I guess I just had to accept my new role as a camel thief.

A motorbike passed by them at one point, honking its horn, and they didn’t care in the slightest – it was the bicycle that was scary. Then again I was probably making quite a lot of noise as I bounced and slid along one of the worst roads I’d ridden in some time, with lots of big, loose rocks and deep sand.

This pursuit only lasted for a little over 3km, but that was over twenty minutes on this road. They crossed a ford, as did I (it was freezing), then moved a little distance from the road. They were still running away but as they weren’t on the road I was able to get past them. When they realised I wasn’t actually chasing them they stopped and stared at me.

The bad road lasted for the first couple of hours before turning to shallow sand that was a significant improvement. The valley opened up into plains and I climbed along gradually. 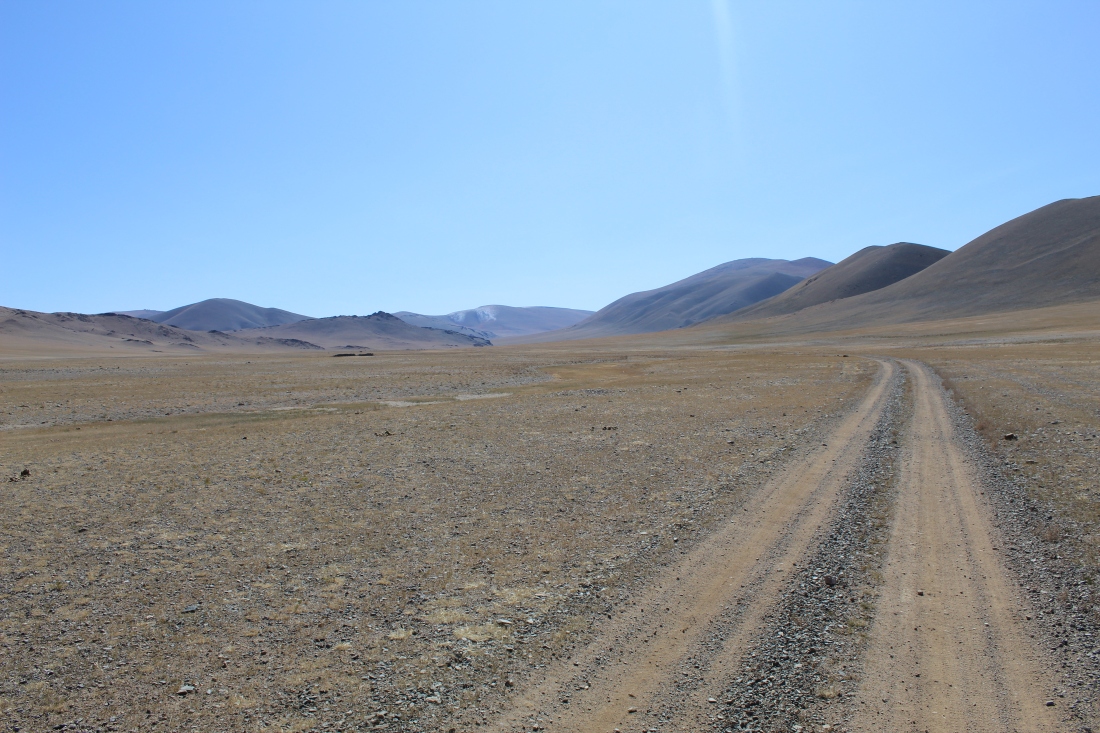 The ridge at the end was an altitude of just under 3000m; it was the last pass of the Altai. As usual the final section was steep but in this case ridable. Once past the top I began the descent.

The track was mostly reasonably smooth and I was able to roll along at a decent pace. I’d been descending for a couple of hours when, going over a small bump, there was a BANG and a cloud of dust as my rear tyre exploded.

This wasn’t actually much of a surprise. The sidewall of the tyre had been visibly failing for some time. This morning I spotted a small hole in it, and a few kilometres before it exploded I had seen the inner tube beginning to poke out. I’d been trying to ride carefully but there is only so much one can do on such surfaces.

I was only about ten kilometres from a main road so I decided to sort out a temporary fix, ride to the road, then decide what to do. I patched the tube (a surprising success given the size of the hole). This wasn’t my first time dealing with a sidewall failure so I cut up a spare inner tube and placed part of it between the tube and the tyre. This done, I set off to very slowly and cautiously ride the next ten kilometres.

At the junction with the main road there was a settlement; it was too small to be called a village but it did have a shop. After finding the owner and getting her to open the shop, I bought some food and drinks before sitting down to examine my options.

There were two real options for getting a new tyre – retyring, if you will. The first was Ulaan Bataar, the Mongolian capital. I’d need to ride to a town, find somewhere to store the bike, take the bus to the capital, buy a tyre, and get the bus back. By the time I’d done all that, I wouldn’t have enough time left on my visa to reach the border I’d intended to use to get to China.

The other option was to go to China and purchase a tyre there. The border was about 220km away, downhill on a tarmac road. From there it would be another 120km to a bike shop. The more I thought about this idea the more it appealed.

The plan had been to cycle east through Mongolia for another 2000km, cross into China, and visit Beijing. From there I’d turn around to loop back west and, after about 6000km in China, cross into Pakistan (with a deadline of November 31, when the border closed).

I already had some concerns about this plan. Chief among them was the idea of a deadline. Although that pace would not necessarily be challenging for me, it would mean ten weeks of cycling with a constant awareness that I needed to make progress in order to reach Pakistan on time. I find this sort of pressure detracts from the enjoyment. The other significant concern was weather: this plan involved cycling along the northern edges of the Tibetan plateau in November, which would make for some cold nights, requiring extra equipment.

Furthermore, the part of Mongolia I had most looked forward to was the Altai mountains: the section I’d just done. I’d ridden a remote route across mountains with incredible scenery, past herds of yaks and camels with golden eagles overhead. I did not overly feel I would be missing out by not riding the rest of what I did to Mongolia.

I decided, therefore, to ride south toward China. On the way to the border I would stop in the town of Bulgan, and use the internet to make some more detailed plans.

While I’d been thinking, I’d also been working on the bike. I put the damaged tyre on the front, where there would be less weight on it. I improved the “reinforcement” of the tyre, with several sections of cut up inner tube.

It was getting late but I had time to ride a half hour or so. In quite a contrast to this morning, I was now on perfectly smooth tarmac, the best road I’d ridden in ages! 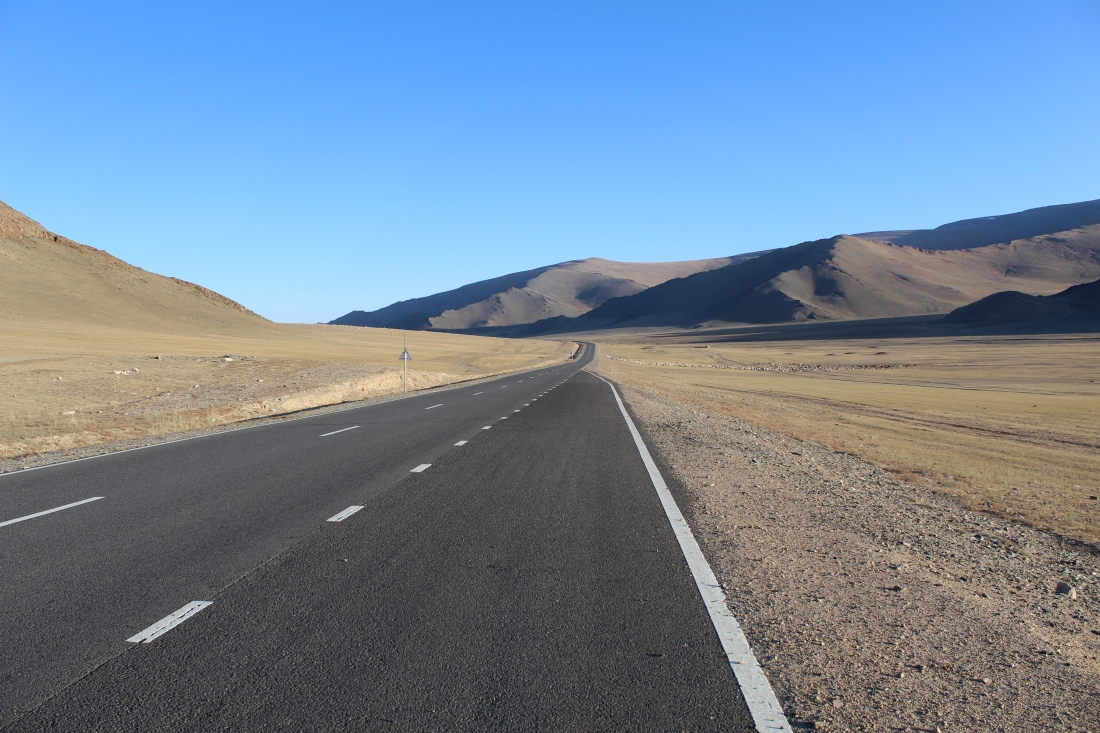 After about 10km I pushed the bike away from the road and set up camp, with some large rocks providing a bit of wind shelter.

It was an unexpectedly cold night. I left a water bottle on my bike, which froze. I therefore waited for the sun to rise over the mountains before setting off cycling. Now that I was back on the main road, I had to deal with all sorts of traffic. Sheep, horses, yaks… Even the occasional car! 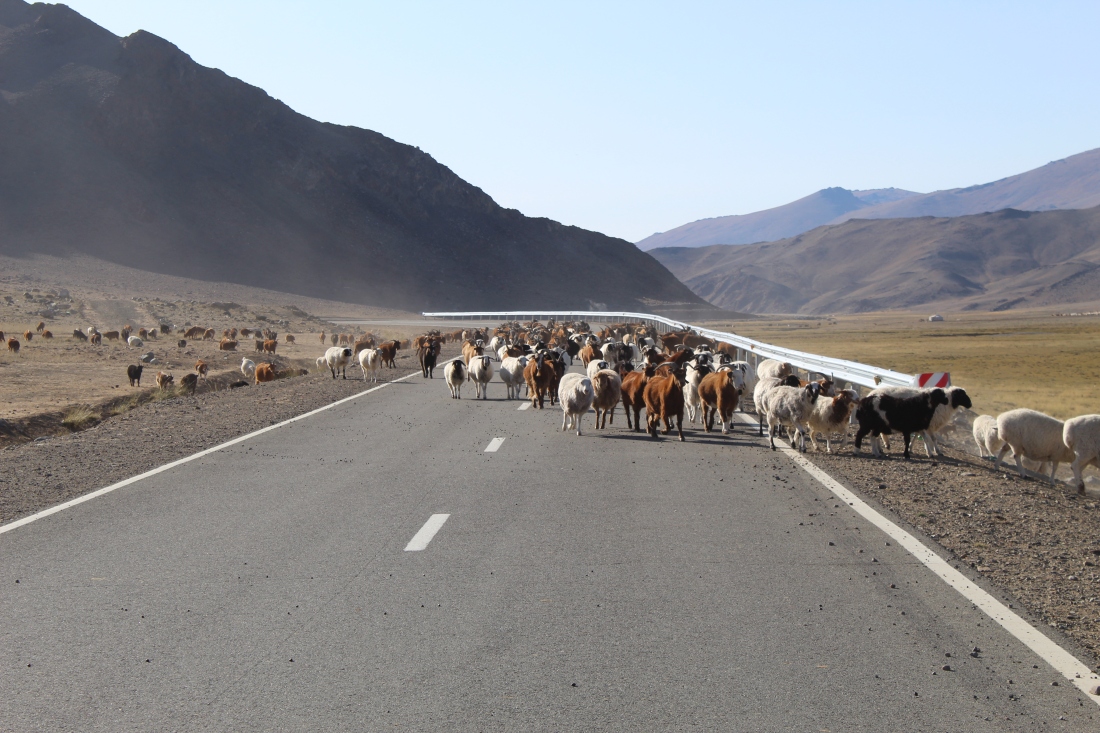 The traffic was low relative to the quality of the road, but still somewhat higher than I’d been experiencing over the last few days. What surprised me was how courteous the drivers seemed. I was given loads of space – drivers almost always went completely over to the other lane to overtake, and even waited if there was oncoming traffic. It was probably the best driving I’d seen in the last year!

Due to the extra rubber between my tyre and inner tube, there was a bump for every wheel revolution. On the last few days it wouldn’t have been noticeable on the rough terrain, but it was quite a contrast to the smooth tarmac. With 220 km until the border, that meant a hundred thousand bumps. One. Two. Three. Four. No, probably best not to keep count…

As a corollary to that idea, I’ve cycled something like thirty million wheel revolutions at this point. That’s not bad!

The road trended downwards, descending from 2400m to 1200m over the course of the day. Most of this was during the first part of the ride, where I followed the course of a river. Now that my most worn tyre on the front, I kept my speed low, mostly maintaining a pace of about 20 km/h.

The road levelled out near the village of Altai – village names seem to be reused frequently here. From here I was mostly cycling along a flat desert. I began to feel something I hadn’t experienced for a couple of weeks… Warmth! 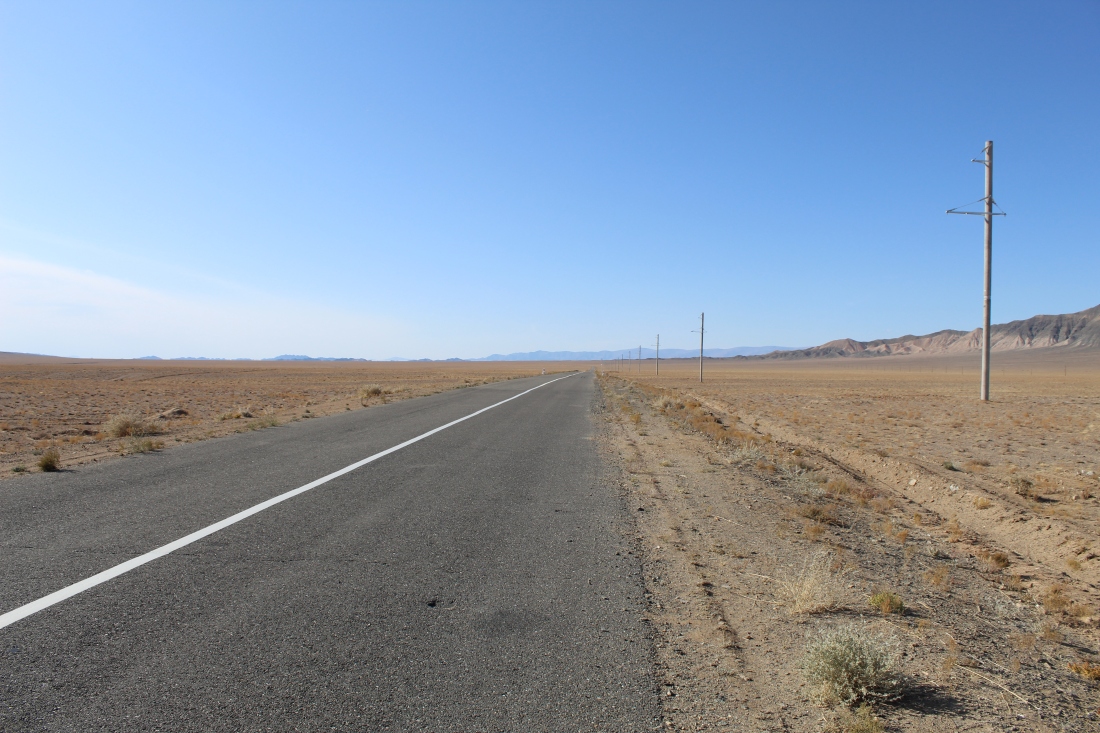 According to my map, there was a 12km unpaved section ahead. I’d been thinking about this and had decided that the sensible thing to do would be to walk that part. A bumpy road would wear out my tyre several times faster than tarmac, and riding it would significantly reduce the chances that I’d be able to ride all the way to a bike shop. I wasn’t looking forward to 2-3 hours of walking though, so when I instead found a newly tarmacked road, I was greatly relieved.

Thanks to the time saved by not having had to walk the bike, I was able to reach Bulgan (another repeat name) by sunset. This was a larger village and had a couple of hotels, so I checked in to one.

I took a day off at the hotel. A major reason for this was that I needed to apply for a Pakistan visa, since my new plan would see me there much sooner. They have recently introduced an e-Visa system but it cannot be used via a mobile device – a message appears stating that the screen resolution is not compatible.

Very kindly my tour agent back home (or Mum, as she’s also known) submitted the application for me. It was quite a laborious process, so thanks very much Mum! Now all I had to do was wait 7-10 working days and I’d have my visa! Or so I hoped…

2 thoughts on “A Change in Direction: Retyrement”