After saying goodbye to the other travellers with whom I’d crossed the Caspian Sea, I cycled away into Kazakhstan. I knew there were going to be long distances without water ahead so I stopped at a village, Kuryk, to stop up. A small office was the only building with an open door, and the women there kindly filled up my water bottles in exchange for a few selfies.

From Kuryk I rode out into the steppe. This monotonous terrain was all I would see for the next thousand kilometres or so, through Kazakhstan and well into Uzbekistan. I saw occasional animals – some familiar ones, like goats and cows, but others more exotic like camels and a tortoise – an unusual animal in that it moves slowly enough I can get a good photo. 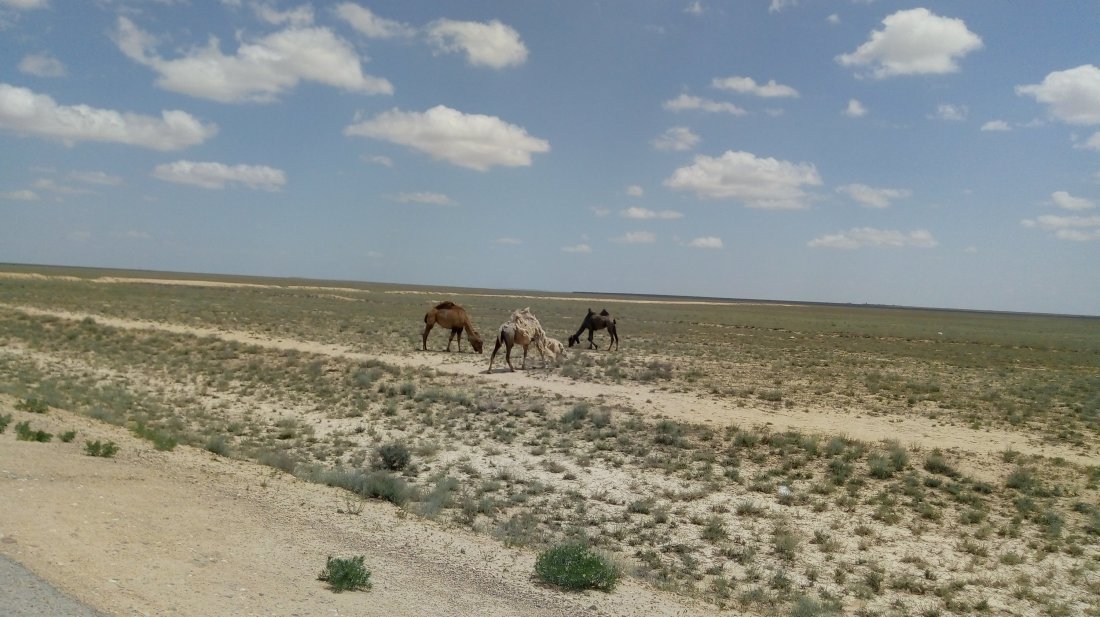 Apart from a headwind the first day, I was quite lucky and was pushed along by a gentle tailwind as I rolled along in a generally eastern direction. On the second day a van overtook me before slowing down to chat. The occupants were Doug and Emily, a British couple I’d met on the ferry. This was not the last time I would meet them.

The third day from the ferry, at Beyneu, the last Kazakh town, I stopped to stock up on food and water. After this it would be some 400km to the next town, and water sources were 100-150km apart. From here I rolled along toward the Uzbek border. Shortly before reaching it I was passed once more by Emily and Doug! They had stopped in Beyneu last night and were still asleep when I passed through this morning.

I made quick progress through the border post. There were vast numbers of locals crossing, often in heavily overloaded cars used to import large quantities of goods. A soldier spotted me, a tourist, and led me to the front of the queue where I was stamped out of Kazakhstan and into Uzbekistan. Crossing by car was not so quick – it apparently took Emily and Doug about five hours to get through.

After a few hours rattling along the much lower quality Uzbek road I performed my usual act of a sunset walk out into the steppe where I set up camp for the night. 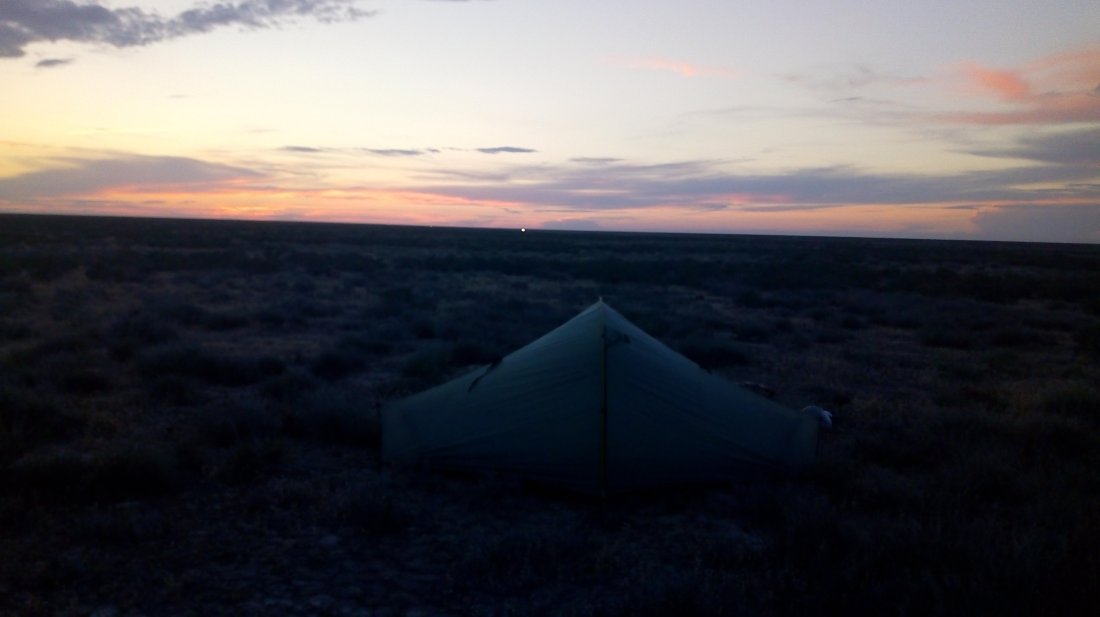 The next day was a rather featureless one. Apart from a couple of water stops I simply bounced my way across the bumpy road. The one event of the day was another meeting with Doug and Emily! I’d been sheltering in a storm drain to get away from a rain shower, and emerged just as they were passing. This was getting to be something of a pattern!

My fifth day of steppe riding brought an end to the monotony. I reached an area irrigated by a number of rivers and canals, with trees for shade and even fields growing crops! 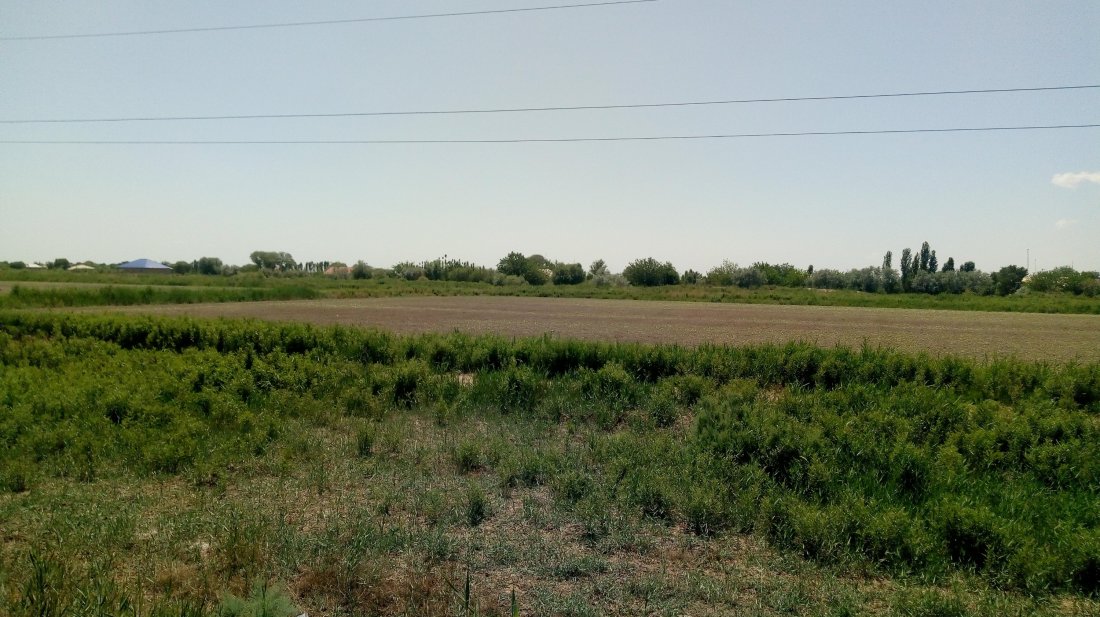 Villages and towns were more numerous, and I stopped to buy food for the first time in a couple of days. I indicated to the shopkeeper that I wished to buy a packet of biscuits, and she wrote “4000” on a calculator. I was briefly shocked at the price (£8!) before realising I was thinking of Kazakh currency. In Uzbek currency, Som, that was only £0.40. With a rate of over 10,000 Som to the pound, the Som is the least valuable currency I have so far encountered.

The Som has an interesting history. Until recently the government refused to acknowledge the rampant inflation. In 2013, the largest note was 1,000 Som, worth $0.60 at the time. Any non-trivial transaction involved a ridiculous number of banknotes! There was previously a thriving black market, but more recently the government has allowed banks to trade the currency at market rate and has issued larger notes (up to 100,000 Som). There are, however, few low-value notes and coins in circulation. It was not uncommon for shops to be unable to provide exact change and to substitute a piece of bubblegum instead!

After realising I was in fact paying a reasonable price, I took my biscuits and continued on to the city of Nukus. The traffic here was very different to back home. Cyclists travel in both directions on both sides of the street. Cars weave in and out around potholes. Marshrutkas, small shared taxis, stop frequently to collect passengers. A favourite tactic is to overtake a cyclist before slamming on the brakes, leaving the cyclist with only a split second to slam on their own brakes or swerve out into traffic.

I made my way out of Nukus unscathed, helped by the purchase of a partly-frozen bottle of pepsi that was a great comfort in the desert heat. Outside the city it was a return to desert, and with a storm brewing. I reached a military checkpoint just as sand was blowing towards me in waves. At first they seemed to be telling me I could sleep at the checkpoint, but this offer disappeared and I was told to cycle back to Nukus or continue on to the next hotel. I wasn’t about to backtrack so I rode on, fighting a vicious headwind, and watching the storm come closer. There was no hotel in sight so I left the road and set up camp in a small gorge. This would provide some wind shelter and the rain would hopefully drain away. In the end, the storm blew over and I saw barely a drop of rain.

My sixth day of cycling completed the ride across the steppe to Khiva. I was back out of the Nukus desert and crossed a pontoon bridge over a fairly large river. 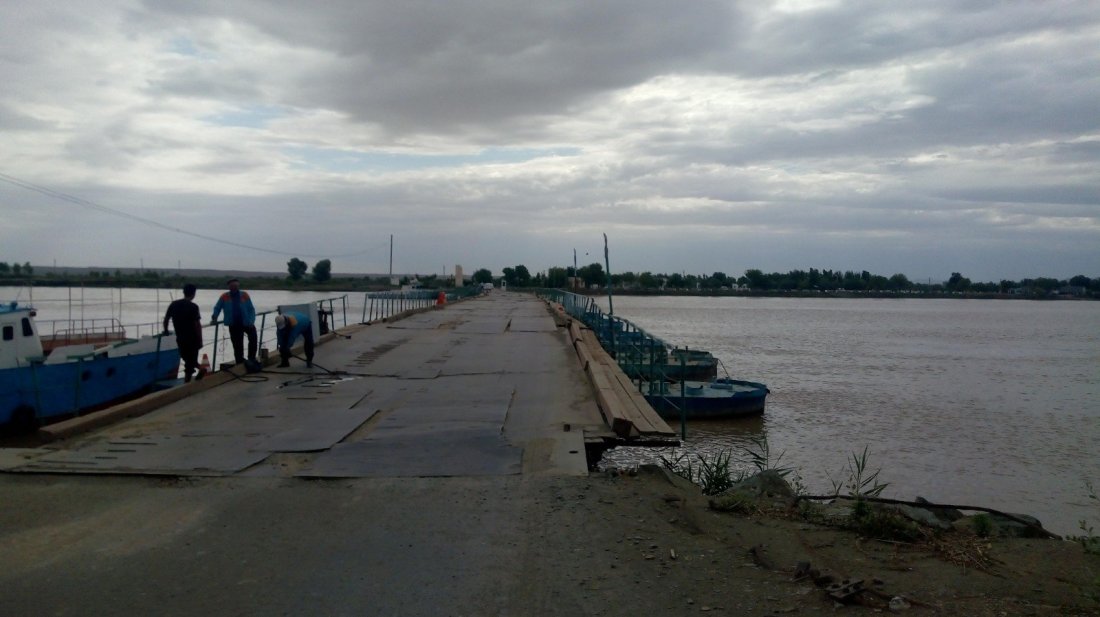 From here it was fairly populated until the city of Khiva. It was hot, though, and I made frequent stops to buy chilled bottles of pepsi. In the afternoon I reached Khiva’s outskirts and stopped at a hostel. I’d made good time, averaging 200km a day. As it turned out, I’d kept up with Emily and Doug, who arrived at Khiva in their van on the same day.